Updated : April 02, 2019 04:40 PM IST
Manipur government banned the use of polythene carry bags of more than 50 microns in thickness, in 2018.
The excessive waste dumped in the rivers has been affecting the biodiversity raising the risk of water crisis in the hilly state.
The issue of plastic pollution and weak implementation of the ban features in election campaigns in the run up to the elections which start on April 11 in Manipur.

Forty-year-old Thoi has been selling different varieties of rice inside the historic Ima Keithel all-women market in Imphal, the capital city of India’s north-east state of Manipur, for the past 12 years. She considers herself lucky to be part of the market that has a 500-year-old legacy and is probably the only trading place in the world that is solely run and managed by around 5000 women.

Ima Keithel or “mother’s market” has long been a part of Manipuri tradition with evidence suggesting that it dates back to the 16th century. The bustling market is a welcome sight for proponents of women’s empowerment. Thoi who works at the Ima market in Manipur, knows about the plastic ban in the state but still uses polythene bags as customers demand them. Photo by Gurvinder Singh.

Close to the market flows the river Nambul. Running through the heart of the city, the river, riddled with pollution, seems to be fighting a losing battle for its survival. Several thousands of women doing business near the river are ignorant of the fact that they have been silently killing the river every day.

The extensive use of polythene bags and dumping of other waste has reduced Nambul river to a stinking drain, dealing a deathly blow to its biodiversity while increasing the risk of health hazards.

Despite the ban on the use of polythene bags of over 50 microns in Manipur, traders at Ima market openly flout the norms by using the banned polythene. “We know that the state government has implemented a ban but there is nothing we can do because customers demand polythene to carry the purchased goods. Sometimes, the raids are carried out by the administration and they seize the polythene bags, but things turn normal within a few hours,” said Thoi trying to offer a convincing explanation for her use of polythene . Close to the Ima market flows the river Nambul that is choking with garbage. Photo by Gurvinder Singh.

Nambul appears like a dumping ground of waste that includes pieces of floating polythene, plastic bottles and other household waste. The river, originating from the Kangchup hills and emptying into the Loktak Lake, the largest freshwater lake in northeast India, is among the most polluted rivers in the state. Several indigenous fish species like the Nganap (Acanthophthalmus pangial), Ngasep (Mystus bleekeri) and Ngamu-Sangum (Garra. manipurensis) have disappeared from the Nambul due to excessive pollution.

Ban on the use of polythene bags

Taking note of the increasing pollution load and its disastrous effect on environment and biodiversity, the state government in 2018 notified a complete ban on the use of plastic carry bags of more than 50 microns in thickness, under Section 15 of the Environment Protection Act, 1986.

The notification was issued in pursuance of Section 4 of the Plastic Waste Management (Amendment) Rule, 2018, by India’s Ministry of Environment, Forest and Climate change.

The act also mandates imprisonment for a term which may extend to five years or with a fine of maximum Rs. 100,000, or both.

Despite the stern rules on paper, the ban seems to have hardly any impact on the ground, where drains are found to be clogged with polythene bags and other plastic waste all over the city. 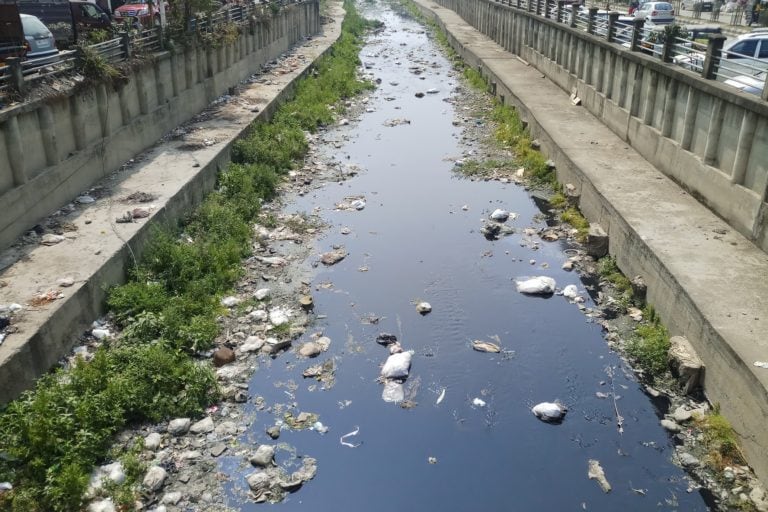 Nambul river is among the most polluted rivers in Manipur. Many species of indigenous fish found here have completely disappeared. Photo by Gurvinder Singh.

The burning of plastic has also been adding to air pollution.

According to the officials of Imphal Municipal Corporation (IMC), the city constituting 27 wards generates around 120-130 tonnes of waste every day that is collected by trucks and then disposed of in the city’s fringe areas.

The officials concede that the non-functional treatment plant (for dry waste) at Lamdeng has been forcing them to bury the waste underground at Porompot.

“Earlier, we used to segregate the waste followed by its treatment at our plant in Lamdeng but locals protested over the foul smell emanating from the waste. Subsequently, the functioning of the plant was halted and temporary arrangements were made at Porompot where the waste is buried under the ground by digging around 7-8 feet deep beneath the ground,” said Sashi Chingsubam, Section Officer, IMC.

He, however, admitted that the waste is buried without any segregation and the administration is keen to find a permanent solution to the issue.

“We also face severe manpower shortage and inadequate financial resources that also pose as a hurdle to keep the city clean. We cannot keep dustbins in every part of the city because there is a fear of the bins being misused by the insurgents to hide explosives as the state is still prone to militancy,” Chingsubam said.

Even the senior officials of Manipur Pollution Control Board (MPCB) agree that the burying of the waste could be hazardous. “There is every risk of waste getting exposed during heavy showers and increasing the risk of the spread of diseases. Even the bio-medical waste is not carefully segregated which is again dangerous,” pointed out Homen Joy, nodal officer, MPCB.

He also commented on the change of climatic conditions in Manipur in the past decade and speculated whether burning of plastic and other garbage could be a contributor to rising temperatures. “The mercury in summers goes up to 40 or even 42 degrees Celsius from 28 degrees Celsius which was the temperature ten years ago. In winters the average temperature is around 16 degrees Celsius during December, up from seven degree Celsius.” Dumping ground of waste at Porompot. Photo by Gurvinder Singh.

Health experts, however, opine that the temporary measures of disposing of waste could have a long time effect on the health of the people.

“We have been already witnessing a steady rise in the number of patients suffering from respiratory diseases. There has been a 30 percent rise in the patients coming for the treatment of cough and breathlessness in the past few years,” said Ch. Debeshwar Singh, professor, Respiratory medicine at Jawaharlal Nehru Institute of Medical Sciences (JNIMS), a premier state-funded medical college and hospital located in Imphal.

Singh said physicians fear that the cases could be more in number as people do not turn up at government hospitals or prefer private practitioners.

But there is something more serious that the state is staring at if the plastic menace – or more broadly, the pollution in the rivers – is left unchecked: a severe shortage of drinking water. About 90 percent of the drinking water supply in the urban areas of the state is from the three major rivers namely Imphal, Nambul and Iril.

The National Wetland Inventory and Assessment states that Manipur has 15 major rivers and streams amounting to 166.77 square kms from a total of 22,327 square km area of the state.

Over the years, people have to face an acute water crisis when rivers run dry during summers. Erratic rainfall is also being blamed for the water shortage.

According to the Manipur Pollution Control Board, the Biochemical Oxygen Demand (BOD) level of Nambul is 5.9 mg/ litre (December 2018) which is over five times higher than the permissible limit of 1.2 mg/litre. The other rivers Imphal and Iril are relatively better off but constant dumping of garbage has slowly taken a toll on them, said Homen Joy.

The Loktak lake is bearing the consequence of the unbridled pollution as all the streams and rivers empty into it. Heaps of plastic and other waste can be seen strewn in the lake destroying its biodiversity and affecting the livelihood of several hundreds of fisherman who depend on it. 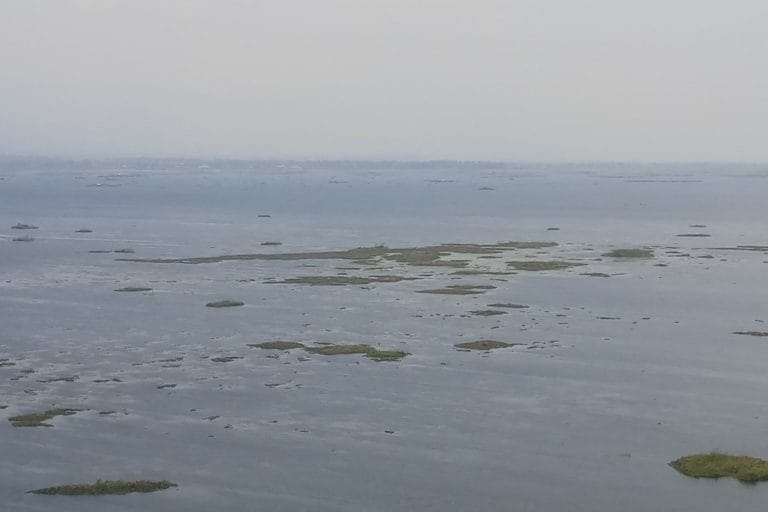 Loktak lake bears the consequence of the unbridled pollution as all the streams and rivers empty into it along with heaps of plastic and other waste. Photo by Gurvinder Singh.

Ahead of the elections, in March, the BJP-led Manipur government launched the state’s maiden drive for rejuvenation and conservation of Nambul river in Imphal under National River Conservation Plan (NRCP) of the Union Ministry of Environment, Forests and Climate Change, Government of India.

Politicians likely to rake up plastic issue to garner votes

With the bugle of general elections sounded, political parties in Manipur appear keen to use the debate around polythene bags in poll discussions.

“We will focus on the rampant use of polythene and the failure of the government to curb it. We will assure the voters that our party would try its best to stop degrading of the environment by polythene if we manage to win both the parliamentary seats in the upcoming general elections,” assured Hareshwar Goswami, senior Congress leader in Imphal.

The BJP that holds both the Lok Sabha seats in the state stressed that the issue cannot be ignored.

“The government has been trying to create awareness among the people regarding the use of polythene. But it would take time. Besides, we have to look for an alternative solution to desist people from using polythene. We might have to encounter political missiles from the opposition regarding the implementation of the ban,” said R.K. Ranjan, chairman of the vision document of the state BJP.

Apparently distraught by the hollow promises of the politicians, voters say that they would seek assurance for the complete implementation of the ban from the candidate who comes asking for votes.

“We have to collectively come forward to stop the use of polythene and politicians can play a major role by creating mass awareness among people while addressing the issue in their hustings. They have to assure us that they would keep on raising the issue on the public platform also after polls. We would be very cautious in electing the candidate who has a concern for the environmental issues,” said Haopu Gangte, 27, a young voter at Moirang in Bishnupur district of Manipur.

The polling for the two Lok Sabha seats in Manipur will be held in two phases on April 11 and April 18 respectively.