As the country gradually looks returning to normalcy, from the pandemic induced lockdown, and the business activity picking up, the economy seems to gather pace. At least, the indicators are pointing to improvement. The data made available post partial reopening are suggesting affirmations.

As the country gradually looks returning to normalcy, from the pandemic induced lockdown, and the business activity picking up, the economy seems to be shifting gears. At least, the indicators are pointing at improvement. The data made available post partial reopening are affirming this.

According to data compiled by Phillip Capital, June energy consumption was highest since February, picked up further in July, mid-July data shows a slight slack. June E-way bills were higher than March while July seems stable.
Further, the Google mobility index has flattened post the first week of June. India's unemployment rate is at pre-COVID levels, rural unemployment at near lows, though the latest data is marginally weak. Substantial surplus liquidity persists in the system.
Energy Consumption
Energy consumption for June 2020 was at -12.2 percent, when compared to the same period last year. Sequentially, it saw a marginal increase of 2.4 percent in June compared to 21.2 percent in May. Consumption in April was at -15.3 percent due to the lockdown.
Daily consumption up to July 20, shows a contraction by an average -4 percent compared annually. Google Mobility Index
Google mobility report depicts the economic activity based on the location of users. According to the data,  mobility to grocery/pharma places had bounced back to pre-COVID levels in June while July data indicates a slight decline. Mobility to the workplace is around 30 percent less than normal and has flattened after the first week of June, the Phillip Capital report noted.
Further, mobility to transit stations/public transport is tapering in July (41 percent below normal. Also, mobility to retail stores is 60 percent below normal. Food Stock - Focusing on Garib Kalyan Yojana
Food grain stocks were higher at 104.2 million tonnes (20.9 percent YoY) in June 2020 compared to the same period a year ago. Food stocks in May were up by 16 percent. 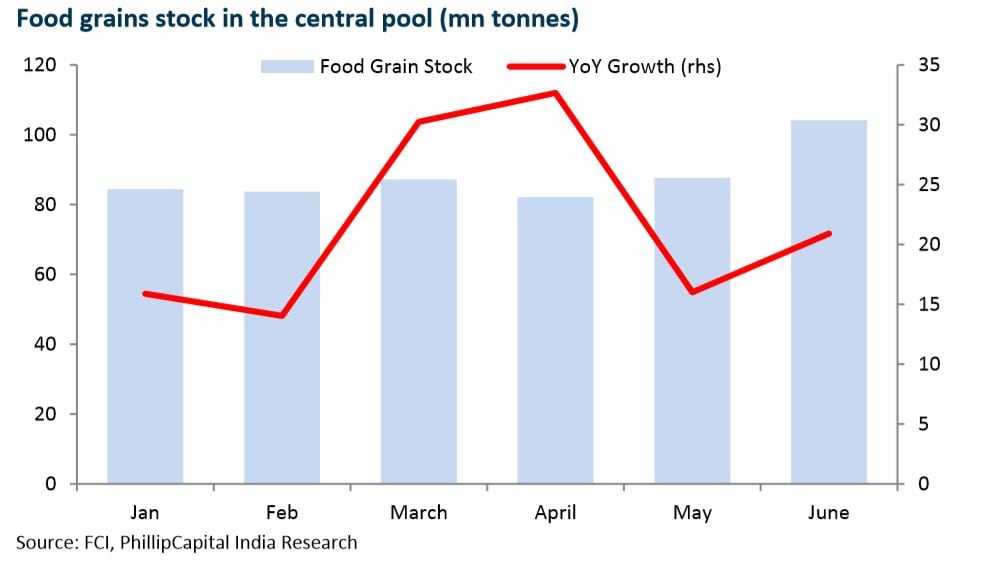