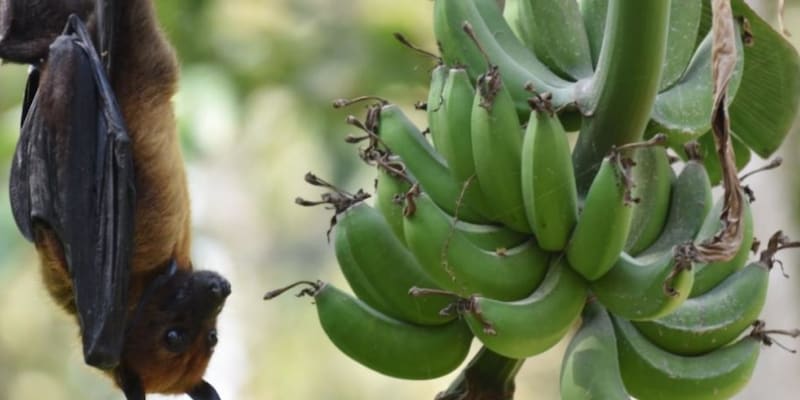 Researchers have harnessed machine learning, a form of artificial intelligence, to identify four species of bats in India that are likely to host and spread the deadly Nipah virus, in a study that assessed the risk of Nipah virus spillover. Two of these species are found in Kerala where an outbreak occurred last May. This adds to the 11 bat species found in India that have been shown to be exposed to the virus by the presence of antibodies.

First discovered in 1999, Nipah belongs to a group of highly lethal emerging henipaviruses that are harbored by bats—the wild reservoirs of the virus. From bats the virus can spillover and infect humans as was the case in Bangladesh in 2004 when people were infected by consuming bat-infected raw date palm sap or through an intermediate host such as domestic pigs as is widely considered to be the case in an outbreak among pig farmers in Malaysia in 1998.
“The number of species predicted maybe isn’t that surprising given the high diversity of bat species in this part of the world,” Barbara Han, a disease ecologist at Cary Institute of Ecosystem Studies, and an author of the paper told Mongabay-India. “The predictions for insectivorous bats that are not closely related to the Pteropus medius
Once in humans, Nipah virus shows the potential to spread among close contacts—known as secondary transmission—which can lead to outbreaks. “While secondary transmission is not as sustained for Nipah virus as it is for influenza or measles, ongoing spillover events could lead to a strain of the virus that has evolved more efficient secondary transmission,” Han warned.
Kerala outbreak
An outbreak of Nipah virus infection gripped the state of Kerala in May 2018 infecting 23 people, of which 21 died (16 deaths and 18 cases were confirmed by laboratory tests). But it wasn’t the first time India had seen Nipah. In 2001 and 2007, there were smaller outbreaks in the state of West Bengal.
Following the Kerala outbreak, studies zeroed in on the fruit bat P. medius (formerly referred to as P. giganteus), or the Indian flying fox as it is known popularly, as reservoirs of Nipah virus. But without a vaccine at present—although research is underway—and a high mortality rate, “there are no effective countermeasures currently available,” said Han.
As a result, “the best countermeasure is to target our surveillance to identify wild reservoirs and quantify transmission risk,” she added. This involves determining which bat species harbour the virus. But sampling efforts to identify bat species have so far been patchy in space and time with a dearth of studies from India.
Tracking traits of bats: which species likely to host Nipah?
Han’s team wanted to find out what other bat species are likely to harbour the virus, apart from P. medius.
After culling past data on Nipah virus in bats, Han’s team identified all the bat species known to harbour Nipah virus either by showing the evidence of infection (by shedding) or exposure to the virus (by showing the presence of antibiotics that react to the virus).
Their analysis of previous studies showed that among the 112 bat species that occur in India, only 31 have been tested for Nipah virus out of which 11 species had antibodies that reacted to the virus indicating that they had been exposed to it—seven of these species reside in Kerala (out of 39 species in the state). But most sampling was conducted outside of India.
Then the team used a trait-based machine learning approach that looked at 48 traits of 523 species of bats that are found in Asia, Australia and Oceana. Some of the traits were diet composition, foraging method, and migration behaviour. By analysing the traits of bat species that have previously been reported to show signs of Nipah virus, the model was able to predict which species in India have the potential to carry and transmit the virus to humans.
Their algorithm was able to identify Nipah-positive bat species with an accuracy of 83 percent. It flagged six bat species that occur in Asia, Australia, and Oceana as likely to host Nipah based on their traits. Four of these species—Chaerophon plicatus, Rhinolophus luctus, Taphozous longimanus, Taphozous melanopogon—are located in India. And both species in the genus Taphozous are found in Kerala.
Greater surveillance crucial
The authors highlight that these four potential bat reservoir species, along with the 11 identified species in India, need to be further tested for evidence of Nipah infection. If they are found to show signs of infection, they should then undergo “longitudinal spatiotemporal surveillance” to detect shedding of the virus. “Building ecological understanding will give us crucial leverage to identify effective management and prevention,” emphasized Han.
G. Arunkumar, director of the Manipal Institute of Virology at the Manipal Academy of Higher Education (Institution of Eminence Deemed to be University) agrees with the authors, stating that the additionally identified bat species need to be “cross verified using actual surveillance and testing of these bats.”
As “the data on bats in India are very sparse,” said Arunkumar, the “need of the hour is systematic studies on taxonomy, habitat, feeding habits, breeding season and distribution of bats in India.” While we need more “serological and virological surveys and longitudinal surveillance to understand the virus shedding patterns in bats,” these should be accompanied with “studies at human-bat interface to understand modifiable behaviours or risk factors in humans to design risk reduction practices.”
He further pointed out, as the authors have also acknowledged in their paper, that since “Nipah virus prevalence is very low except during the time of increased shedding, screening of a large number of bats may be required to verify the claim.”
Although the newly-identified potential host species can guide early surveillance, they should be combined with “local knowledge on bat ecology—including distribution, abundance, and proximity to humans—to design sampling plans that can effectively identify hosts that pose a risk to humans,” stressed the authors.
(This story was first published on Mongabay)
Check out our in-depth Market Coverage, Business News & get real-time Stock Market Updates on CNBC-TV18. Also, Watch our channels CNBC-TV18, CNBC Awaaz and CNBC Bajar Live on-the-go!