Updated : April 16, 2019 08:02:14 IST
The Chennai metropolitan area falls under the Chennai river basin in Tamil Nadu, which is composed of a system of cascading wetlands and three rivers.
During the British era, carefully classified water bodies were brought under the revenue department, a highly centralised system with no involvement from local communities.
In this commentary, Anjana Vencatesan establishes the need for Chennai’s hydrology to become an intrinsic aspect of its urban planning and development.

It is an era of rapid urban expansion that ignores sustainable urban planning principles until disaster strikes. The city of Chennai in Tamil Nadu is no exception to this rule.

The Chennai Metropolitan Area (CMA) defines the limits of the city and has undergone rapid expansion over the decades, particularly in the late 2000s. From 1991-2011, the extent of the CMA was a mere 176 square kilometres including only the Chennai district. As per the 2011 Census, it expanded by almost four times to 426 square kilometres. In subsequent years, the CMA expanded to include taluks from the neighbouring districts of Kancheepuram and Thiruvallur and currently stands at 1189 square kilometres.

In January 2018, the government of Tamil Nadu released a government order for public consultations with the proposal to further increase the CMA by including 1709 villages from the neighbouring districts. Once effected, this would result in a seven-fold increase in CMA area from the current 1,189 to 8,878 square kilometres. A year later, following a public interest litigation in the Madras High Court, the proposal lies in limbo with reports that it may be scaled down in the face of protests from farmers against converting agricultural lands. 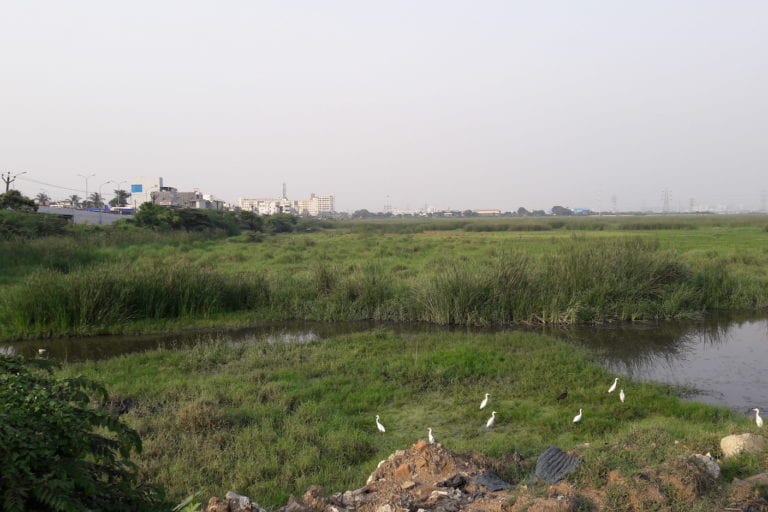 The Pallikaranai marsh, which comes at the end of a cascade of water bodies is a large wetland that is hemmed in by the city. Photo by S. Gopikrishna Warrier/Mongabay.

In the face of such expansion, it is essential to consider the role of hydrology and water management. The city of Chennai falls under the Chennai river basin in Tamil Nadu. Overall the hydrology of Chennai is composed of a system of cascading wetlands and three rivers. The three main west to east running streams in the Greater Chennai Corporation are the Kosathalayar, Cooum and Adayar rivers. In the CMA, there is an additional river, the Araniyar.

Another major channel in Chennai is the Buckingham canal, running north to south, which was an artificial construction connecting all coastal wetlands and was conceived as an inland waterway for transport. In addition to these, there are the three reservoirs of Chembarambakkam, Poondi and Red Hills. In the proposed expanded area, there will be a total of eight rivers – Swarnamukhi, Araniyar, Kosathalayar, Cooum, Adayar, Vegavathi, Cheyyar and Palar. Except for Kosathalayar and Araniyar, all of the others are seasonal rivers and they function as the primary drainage channels for excess storm water running into the sea.

In South India in general and Tamil Nadu in particular, the terminology of water bodies have historically been varied and detailed and the management of these has been customised according to the type. The classification of water bodies was based on three main parameters – extent, depth and the flow pattern. Based on the above, local nomenclature for them included ery, kulam, kuttai, thangal, odai, madavu and urani.

Under the British regime, this responsibility was brought under the revenue department, with most of the management being undertaken by civil engineers. In effect, it became a highly centralised system with no involvement from local communities. This centralised management persisted post-independence with the responsibility now being handed over to the Public Works Department (PWD). After the Chennai floods of November-December 2015, many residents raised their buildings as an adaptation measure. Conservation of the water bodies could have averted such severe flooding. Photo by S. Gopikrishna Warrier/Mongabay.

In present-day Chennai, the management of water resources involves multiple government departments and agencies – the PWD, the Chennai Corporation, the Municipal Administration and Water Supply (MAWS) department, the Chennai Metropolitan Water Supply and Sewerage Board (CMWSSB), the Chennai River Restoration Trust and the State Wetland Authority. In addition to this, the State Disaster Management Authority is also mandated to oversee the restoration of wetlands.

Despite the existence of multiple specialised agencies, there are several flaws in the planning and management of Chennai’s water bodies. First, the last proper survey on the area and extent of water bodies (known as the Field Measurement Book or FMB survey) was conducted by the government in 1987. As a result, there is no data on the actual loss of wetlands. This, combined with severe encroachments over the years, means that presently, there is no accurate figure of the number of water bodies in Chennai that is unanimously accepted among the various government departments. A detailed list of the administrative jurisdiction of wetlands is absent and fundamentally, most water bodies including marshes and seasonal wetlands are still classified as “wastelands” — a remnant from British era classification methods.

A network of blue and green

Chennai derives its resilience from “a network of blue and green” — a network of wetlands and vegetation cover. The city already has heightened vulnerability to cyclones owing to the Bay of Bengal. Further, a decrease in both wetland area and vegetation area only adds to the susceptibility to extreme weather events. The series of maps (Figures 1 – 4) illustrates how the rapid increase in the built-up area has happened at the cost of the loss of the city’s critical wetlands and how the areas affected by flooding are directly correlated.

In 2007, a risk perception study for extreme weather events in Chennai was conducted by the University of Freiburg, Germany, Care Earth Trust, Chennai and Loyola College, Chennai, supported by the German Agency for Technical Cooperation (GTZ). This consisted of the analysis of flood risk exposure, analysis of risk perception and management and the development of flood risk maps. One of the takeaways from the study was that floods are quite a regular occurrence in the city.

The study documents a total of 26 floods from 1943 to 2006 with a sharp increase in the number of floods from the 1970s. Another key takeaway based on the analysis of meteorological data from 1813 onwards is that there has been no increase in the rate of rainfall received annually over the years. The flooding events in 1996 or 2005 had therefore been caused by strong single rainfall events exacerbated by anthropogenic pressures.

It is therefore evident that the urbanisation of Chennai has happened at the cost of the integrity of its hydrology. As the peri-urban areas around Chennai expand, the construction of urban infrastructure is taking place on water bodies and this combined with flooding, poses a significant threat to the water security of the urban and peri-urban areas. In addition to the established risk of flooding, a study in 2017 outlines the major causes of water-related stresses as the over-extraction of groundwater, degradation of wetlands, a thriving informal and unregulated water market, climate change and drought.

The hydrology of Chennai is a fundamental aspect of its urban planning and development. Unfortunately, this has been largely ignored in the face of rapid urbanisation. The extreme weather events and risks have forced the city to correct its course and this can only be done with a complete revamp of its hydrological management strategy.

A critical component of this is the recognition that the rivers of Chennai are not standalone entities and therefore, restoration works on individual rivers will not be effective as intended. The focus should be an integrated approach to restore and manage the entire Chennai river basin as a single unit. Since the hydrology has been highly influenced by human intervention, conventional approaches will not be effective.

It is also important to realise that these water bodies were traditionally built for irrigation requirements and therefore, management should be modified to suit current and future needs. Overall, the focus of building resilience should be on minimising the uncertainties associated with urban management and this can only be achieved by correcting the legacy of mismanagement proactively.