Khurja in your teacup!

There’s crockery on the roadside, there’s crockery in shops. Crockery in offices and crockery in warehouses. With the fanciest of ceramic vases, decor items and kitchenware on display, clueless visitors may confuse Khurja’s GT road — its main market area — for a ceramic fair. But those familiar with its myriad affairs know that it’s just another day in the crockery city, which makes more than half of India’s ceramic ware.

If you happen to be in India, chances are that most of the crockery in your house came out of its furnaces. Most of the ornate ceramic vases in your garden were moulded and polished in one of its 500-plus ceramic factories.

For such notable distinction, Khurja is too small a town. So small that its official status as a city seems real only on billboards and posters strewn across the market area. Located only 130 kilometres from Delhi, it falls under the National Capital Region (NCR). But its dusty lanes, cramped houses, stinking sewers and slow-paced life stand in stark contrast to its NCR peers.

Khurja has an urban spread of only 15.8 sq kms. But signs of its status as India’s ceramic town extend much beyond it.

House That For a Factory

Many of the large manufacturing units — located mainly on city’s outskirts —  are significantly staffed. Such factories churn out thousands of ceramic pieces a day: cups, saucers, crockery, decorative ware, and even insulators for electrical equipment (driven mainly by govt orders).

Equally significant to Khurja’s identity are thousands of small potters who form the major chunk of people engaged in the business. Lack of capital ensures their houses double up as manufacturing units, and their family members as labourers. They get their ceramic ware baked and glazed in the bigger units for a small cost.

Ashish Poddar, ex-president, Khurja Pottery Association points out, “These potters are mainly concentrated in old settlements deep in the city and work on a very small scale.”

Some of them barely manage to make 15-20 pieces a day, and sell their goods in the local market.

Let alone profits, many of these potters struggle to break even. Lack of resources and organisational structure become a huge disadvantage in the city’s competitive market.

They lack the marketing or sales machinery for bulk orders, but can’t leave the business either. For this is all they know. This is all their families have done for generations. 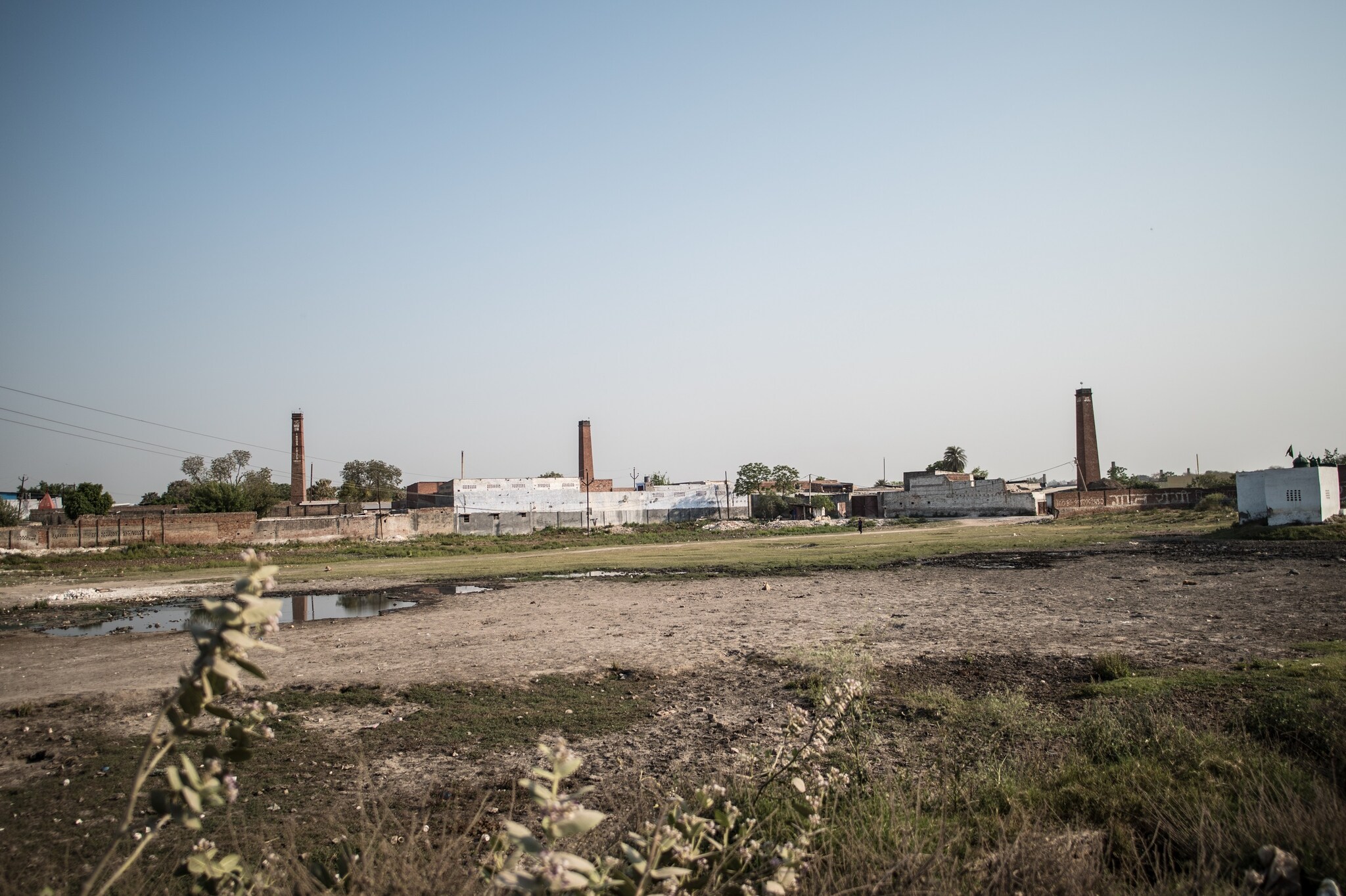 Interestingly, Khurja’s residents have had little to do with its crockery heritage. The credit largely goes to two of India’s biggest invaders: Taimur Lung and the British.

Locals claim that the art of baked clay pottery was introduced accidentally in the region by Taimur Lung. It’s believed that around 1400, when Taimur passed through Khurja, some Egyptian and Syrian potters from his entourage chose to stay back.

Later, they familiarised locals with the techniques of baked-clay pottery. Gradually, it became the city’s main occupation. In some families, the art was passed as an heirloom.

The main turning point in Khurja’s status as ceramic town came in 1940. Poddar tells a widely known story: During World War II, the British ordered few ceramic loo seats for their soldiers in the battlefield. Final products turned out to be better than their expectations. The British realised the sleepy town’s pottery potential and decided to promote it as a ceramic hub.

Within few years, Khurja got a ceramic training institute. Ceramic work, however, was mainly done by potters individually. Its first independent manufacturing unit came up only in the 1960s. By the 80s, the soaring demand for bone-china tableware had forced the industry in Khurja to focus on aesthetics of the products.

Today, it is the biggest cluster of small-scale ceramic industries in India, and ranks second-largest in Asia. Interestingly, the raw material used for its pottery is not found in the region. It’s all imported from MP, Gujarat, and Rajasthan.

Poddar says, “Over the years, attempt were made to establish ceramic industries near areas rich in raw material. But it didn’t affect our market. Khurja is the most vibrant market in terms of product range.” Crockery is supplied to almost all regions in India. Its export, however, hasn’t taken off yet.

The small UP town succeeded in retaining its business because a big chunk of its population is involved in it. More than 80,000 households in Khurja are directly involved in the business, and a significant number of migrant labourers from Bihar and West Bengal also come in search of work.

Many of them take up smaller domestic orders instead of waiting for export orders, something which has kept the industry running despite stiff competition from Gujarat’s Morbi.

Taj Mahal Industries is one of the many small-scale units in the densely populated Sadar area. A coal-lit kiln of yore, though redundant now, still stands in a corner.

A significant portion of its verandah is occupied by ready-to-despatch packs of incense stick stands. The packages have the brand name Cycle Agarbatti displayed prominently on them. This factory is run by five brothers: eldest Mohammad Sharib is in his mid-30s, the youngest, Wasi Mohammad is barely 18. All five take care of different aspects of business from managing raw material to finalising product designs, day-to-day operations, and sale and marketing of final products.

Did any of them think of choosing another career?  ”Not at all. Growing up, this is all we knew. All of us knew that one way or the other this is what we’ll be doing,” responds Sharib.

The family holds the surname Multan — held by many families in Khurja. The Multans of Khurja claim to be descendants of the potters who came to Khurja with Taimur Lang. 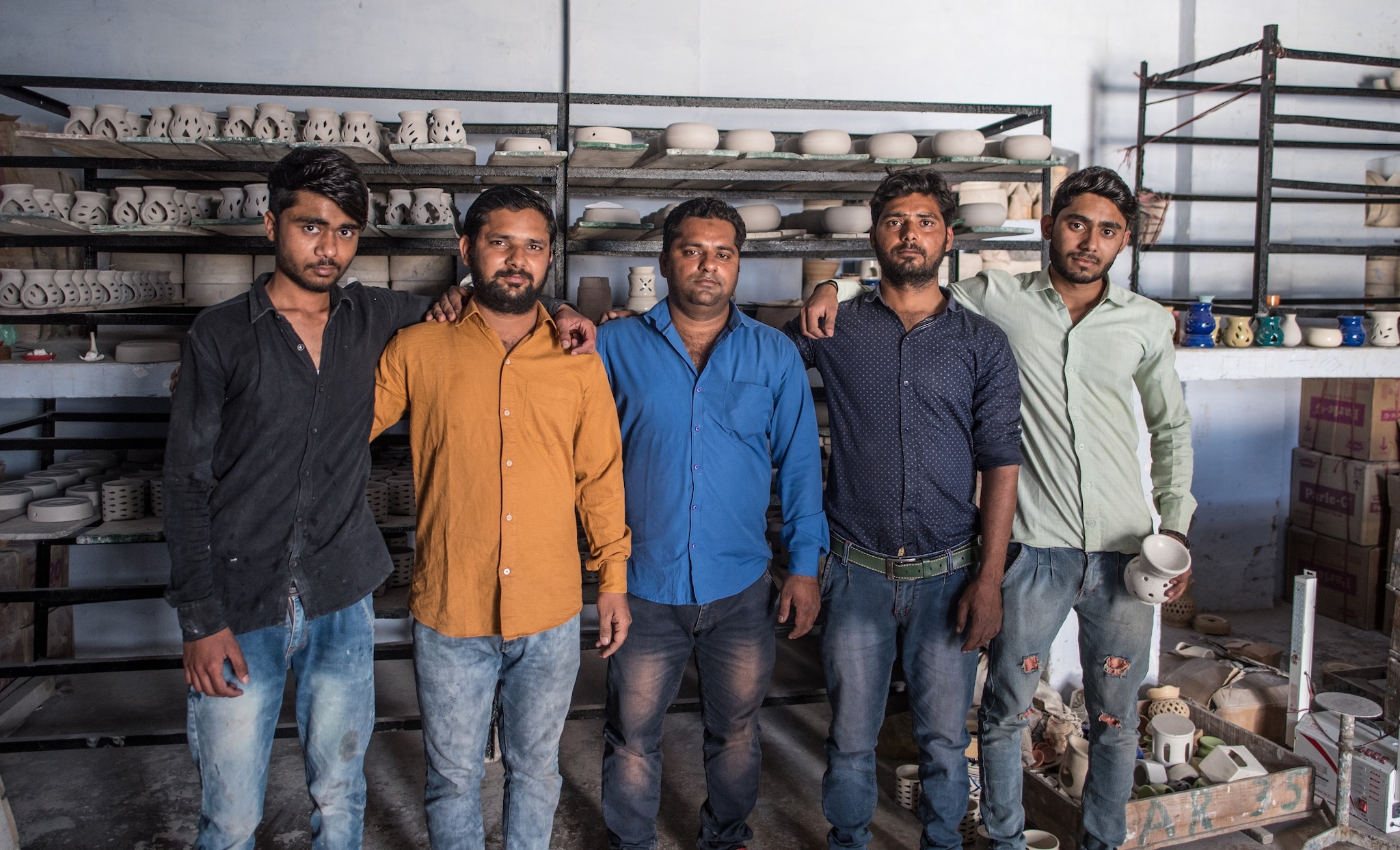 Most of these families are directly involved in the ceramic business. Sharib claims that his own clan (extended family included) owns 10 ceramic factories, with most of the family members involved in the business.

The business, however, isn’t restricted to the Multans. Majority of the population in the city earns livelihood through it. Those not in the business of making ceramic ware have many other avenues to explore. From selling raw material, equipment to merchandising, middlemanship, transportation services, a number of allied work options exist. In all, the city’s economy revolves around the business of making ceramic ware.

A day in Khurja is like a day in a giant ceramic factory with work cut out for different teams.

In the end, the goal is to keep the business running. Because its survival depends on it.