Updated : August 30, 2019 06:02 PM IST
Ceigall India Limited was engaged by the govt to complete the four-lane 4.2-kilometre road up to the International Border.
The state government has already acquired 62 acres of land for the road project.

As political salvos are being fired by the Bharatiya Janata Party (BJP) and the Indian National Congress over Kartarpur corridor that will connect the Sikh shrine in Pakistan with the Indian side in Gurdaspur, work on the project has hit a roadblock.

Ceigall India Limited, a private construction company, was engaged by the National Highway Authority of India to complete a four-lane 4.2-kilometre road up to the International Border to be used by the pilgrims to reach Gurudwara Darbar Sahib at Kartarpur in Pakistan. Work on the corridor started in April.

The local administration is on its toes as the work on the corridor has to be completed by October 31, before the celebrations to mark the 550th birth anniversary of Guru Nanak Dev, founder of Sikhism, begin.

The Sub-Divisional Magistrate (SDM) of Dera Baba Nanak, where the corridor is being built, Gursimran Singh Dhillon told 101Reporters that the local administration is in talks with Ceigall India Limited about the dispute over payment with the transport contractors.

“We have been told that some of the pending payments have been cleared, but some other bills have also been raised by the transport contractor. We are doing continuous follow-up of the issue and the work on the road will start soon,” informed Dhillon.

Meetings with state and central agencies involved in the project take place on regular intervals and 60 percent of the work on the corridor has been completed, noted the SDM.

According to sources, after the transport contractor didn’t receive his payment, he decided to stall the work at the site as his drivers weren’t ready to work without salaries.

Trucks and cranes remain parked at the construction site in Dera Baba Nanak. The truckers launched a strike on August 24, after which the work has also come to a standstill. 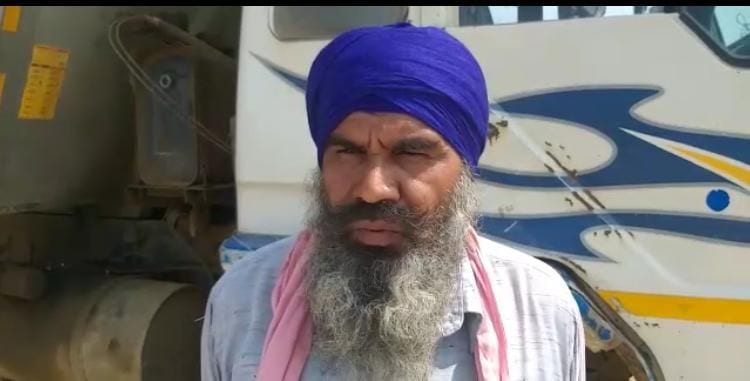 Beant Singh, a truck driver at the site, says the drivers have not received salaries from the contractor due to which they have decided to stop the construction work. “We are facing a severe problem as we have no money to send back to our families,” Beant added.

Punjab cabinet minister Sukhjinder Singh Randhawa who had won from the constituency where the corridor is being built blamed the central government for the issue. The minister, who recently visited the construction site, noted that the work on the Pakistani side is going on at a fast pace. “It seems that the central government is not serious in completing the project within the stipulated timeframe,” he said.

BJP leader Subramanian Swamy had recently suggested that the work on Kartarpur corridor should be stopped as it could be used by Pakistan to fuel terror in Punjab, a remark that had triggered a major controversy.

(All pictures of stalled work on Kartarpur corridor. The Sikh man in a blue turban is truck driver Beant Singh, mentioned in the story.)