Jobs are Narendra Modi's top priority, and data shows he is failing

Jobs are Narendra Modi's top priority, and data shows he is failing

Prime Minister Narendra Modi's ruling party, which promised to create 1 crore jobs a year, maybe in for an unpleasant surprise as it heads toward re-election.

India’s unemployment rate rose to 7.2 percent in February, the highest since September 2016, and up from 5.9 percent in February 2018, according to the Centre for Monitoring Indian Economy (CMIE).
The worrying part is that the unemployment rate has climbed despite a drop in the number of job seekers, Mahesh Vyas, head of the Mumbai-based think tank, said in a report.

India is one of the youngest countries in the world with a median age of 28, compared to China’s 37 and 47 in Japan and a falling labour participation rate doesn't bode well for Asia’s third-biggest economy.
The jobs data -- a key factor watched by the nation headed for general elections in May -- will be unwelcome news for the Modi government and may pose a threat to the prime minister’s re-election bid this year.
Modi is trying to address India's job problem. He has introduced a nationwide consumption tax, an insolvency code for companies and a program to boost domestic manufacturing under his signature Make in India campaign, but there’s no official data on job numbers.
The government released official data for the jobless rate in the past has tended to be out-of-date. But recently it withheld a batch of data because officials said they needed to check its veracity.
A leaked copy of the report revealed that India’s unemployment rate spiked to a 45-year high of 6.1 percent in 2017-18.
But India’s problem, according to the CMIE report, is not its unemployment rate as much as it is the employment rate—the proportion of the working-age population that is employed.
In February this year, the ratio stood at 39.7 percent, with the total number of employed persons estimated at 400 million, which is 7.5 million lesser than February 2017, it said. 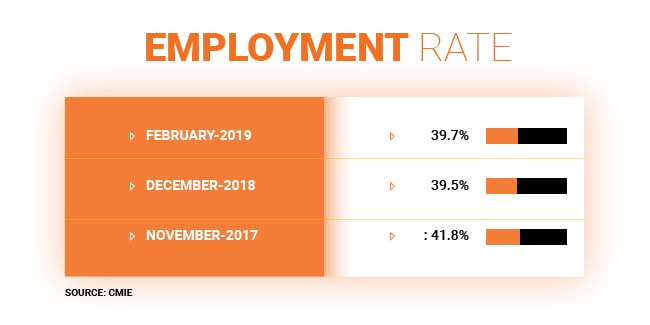 "India’s low unemployment rate stems from a low labour participation rate ... At the core of the problem is very low job opportunities,” the report read. The jobs data comes after a number of setbacks for Modi’s Bharatiya Janata Party ahead of the general elections.
Addressing a gathering of industry leaders at the News18 rising India summit 2019 in Delhi, Modi said it was impossible for the economy to grow at over 7 percent without creating any jobs.
“When foreign direct investment inflow is at an all-time high, is it possible that jobs are not being created?..Is it possible that without employment, people are coming out of poverty? When new rail lines are being laid, new houses and airports are being built, is it possible that jobs are not created by any of these?" said Modi.
Citing data from social security schemes, the prime minister also said that about ten lakh people are being added to the formal workforce every month, translating to 1.2 crore new jobs every year.
Check out our in-depth Market Coverage, Business News & get real-time Stock Market Updates on CNBC-TV18. Also, Watch our channels CNBC-TV18, CNBC Awaaz and CNBC Bajar Live on-the-go!