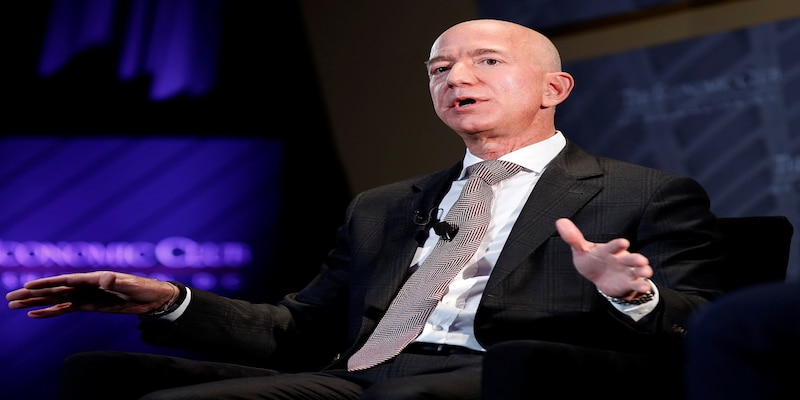 Jeff Bezos has advised people to postpone big purchases like cars or TV as they must keep cash to survive the impending recession in case it gets prolonged.

Amazon founder Jeff Bezos suggested people consider putting off big expenses like buying, a car, TV, or other appliances and instead keep cash readily available as the global economy stares at an impending recession. He advised small businesses to avoid making large capital expenditures or acquisitions amid concerns that the economic downturn may be prolonged.

“Take some risk off the table…Keep some dry powder on hand…. Just a little bit of risk reduction could make the difference for that small business if we do get into even more serious economic problems. You’ve got to play the probabilities a little bit,” Bezos said in an interview with CNN last week.
Last month too, Bezos had tweeted that the probabilities in this economy “tell you to batten down the hatches.”

Yep, the probabilities in this economy tell you to batten down the hatches. https://t.co/SwldRdms5v

Meanwhile, the Amazon founder has decided to give away the majority of his wealth during his lifetime, the latest billionaire to pledge to donate much of his vast fortune. Forbes estimated that Bezos’ “real-time” worth estimates at roughly $124.1 billion. The billionaire, however, hasn’t specified yet how much- or to whom - he will give away the money but said he along with his girlfriend Lauren Sanchez is building the “capacity” to do it.
“The hard part is figuring out how to do it in a levered way,” Bezos said during the interview. “It’s not easy. Building Amazon was not easy. It took a lot of hard work and very smart teammates. And I’m finding - and Lauren’s finding - that philanthropy is very similar. It’s not easy. It’s really hard.”
Also Read: Jeff Bezos sued by former housekeeper over racial bias, long hours
This comes at a time when Amazon is targeting a mass layoff of 10,000 employees, which has already begun and will extend into 2023 as well.
Other tech companies — many of which had gone on hiring binges in the past few years — have also been trimming their workforce amid concerns about an economic slowdown. Among others, Facebook parent Meta said it would lay off 11,000 people, about 13 percent of its workforce. And Elon Musk, the new Twitter CEO, has slashed the company’s workforce in half after taking over.
Check out our in-depth Market Coverage, Business News & get real-time Stock Market Updates on CNBC-TV18. Also, Watch our channels CNBC-TV18, CNBC Awaaz and CNBC Bajar Live on-the-go!