Interactions between people and wild canids in central India

Madhya Pradesh’s Kanha-Pench landscape is synonymous with the surefire tiger sightings it offers tourists in its national parks.

Yet, the 10,000 square kilometers that lie between the Kanha Tiger Reserve in the east and Pench Tiger Reserve in the west is home to not just tigers and forests. It also comprises scrublands and agricultural land holdings where people dwell; and it is also home to five lesser-known carnivores: wolves, wild dogs, jackals, foxes and hyenas.

How do these carnivores and people interact? A new study published in Royal Society Open Science reveals that this landscape does witness man-animal conflict, with most of these species preying on poultry and livestock. However, these wild carnivores could also be facing threats – in the form of competition and disease risk – from free-ranging dogs that are common in villages in this landscape.

From villages and agricultural fields, to scrublands, grasslands and areas often categorised as ‘wastelands’, a diverse range of habitats – that are not legally protected – adjoin and often connect protected areas.

These habitats support not just people but a diverse community of wildlife too. Wild canids, which are mammals belonging to the dog family, are one of them. India is home to five canid species. Central India’s Kanha-Pench landscape is home to four: the Indian grey wolf (Canis lupus pallipes), dhole (Cuon alpinus), Indian jackal (Canis aureus indicus) and Indian fox (Vulpes bengalensis). The striped hyena (Hyaena hyaena), which is not a canid but extremely canid-like in behaviour and ecology, also frequents human-dominated areas here.

To study how these carnivores and people interact in this landscape, a team of researchers from institutes including the University of Florida in the United States of America and Bengaluru’s Centre for Wildlife Studies (CWS) combined both field-derived ecological and social data collected from a 10,000 square km area consisting of 400 villages. After dividing the landscape into 128 grids (each of 52 square km), the team conducted field-based surveys for indirect signs (such as paw prints and scat) of these carnivores. Walking 1,631 km in total for these surveys, the team also recorded signs of ungulate prey, livestock and free-ranging dogs. They detected wolf, dhole, jackal, fox and hyena signs in 16, 4, 64, 23 and 9 sites (of the total 128 sites) respectively.

Though forests constituted more than 80 percent of the habitats in the landscape, dholes used only 12 percent of the sites, while jackals used 86 percent.

The team then interviewed 675 residents to obtain information on carnivore presence and loss of livestock and poultry (depredation) over the past year. They also recorded the respondents’ socio-economic status, land and livestock holdings, economic losses caused due to depredation and the mitigation measures they used.

This revealed that jackals preyed mostly on poultry, across a staggering 95 percent of all sites. Depredation by wolves occurred in 68 sites, followed by foxes in 44. Wolves mostly attacked goats. Modelling these patterns revealed that wolf depredation was higher in sites with large scrubland areas and small settlements, and bigger goat-holdings. Poultry depredation by foxes however, occurred more in smaller settlements and in areas with high poultry-holdings.

Based on this, the team classified the wolf, fox and jackal as ‘high conflict-risk’ canids.

However, dholes and hyenas are ‘low conflict-risk’ species in this landscape, according to the study. Dholes attacked livestock only in nine sites, while hyenas did not hunt any livestock or poultry at all. 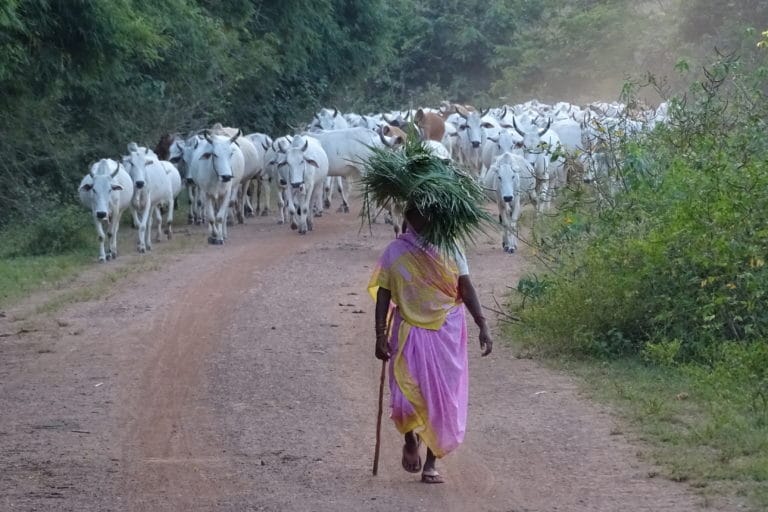 Livestock ownership is common among households in the Kanha-Pench landscape in Madhya Pradesh. Photo by Mahi Puri.

The interview surveys also revealed the several mitigation measures people used, from erecting fences and moving animals into secured sheds (baskets, in the case of poultry) to even getting fires going at night. Frequent losses caused by canids even forced some to give up livestock ownership altogether.

Like most Indian states, Madhya Pradesh too has a monetary compensation policy in place to mitigate such economic losses. However, canid depredation instances are notoriously difficult to prove, said lead author Arjun Srivathsa, doctoral candidate at the University of Florida and research associate with Wildlife Conservation Society-India.

Moreover, there is no compensation for loss of poultry. This, coupled with “flawed implementation” makes the compensatory scheme an “ineffective” mitigation measure, write the authors in their study. According to Srivathsa, the current schemes needs to be more pre-emptive rather than reactionary in order to be effective and sustainable in the long run.

“A decentralized model, in our view, would be more flexible and can be tailored to the local socio-economic conditions such as incorporating the monetary value of livestock, types and breeds of livestock, choice of including poultry,” added Srivathsa.

The study has also developed maps depicting areas where each species show high occupancy, levels of depredation and conflict; these areas need to be prioritised and targeted for mitigation measures, the authors suggest. While a list of areas or villages that fall in these categories are not specified in the study, it will be submitted to the state’s Forest Department for immediate action, said Srivathsa.

Interestingly, 68 sites in the landscape showed the presence of free-ranging dogs. Dog occupancy overlapped with that of wolves, jackals, foxes and hyenas; it appeared to be positively influenced by the size of human settlements.

“Almost all households here keep dogs as watchdogs to protect both livestock (while grazing and at night outside house) as well as farms from crop raiding herbivores,” said Mahi Puri, principal investigator of the study and doctoral candidate at the University of Florida and research fellow at CWS.

The impacts of such free-ranging dogs could be mostly negative for the area’s canid community, commented Chandrima Home, who has studied the impact of dogs on wildlife and recently completed her doctoral degree from Bengaluru’s Ashoka Trust for Research in Ecology.

“Dogs compete with their wild counterparts. Their genetic pool is also affected, for there are increasing reports of possible dog-jackal hybrids from several parts of India. Dogs, as hosts of several diseases, can negatively impact wild canid populations,” she wrote in an email.

Human-dominated habitats near forested landscapes, such as those where the current study was conducted, require serious interventions including garbage management and strict ownership to reduce the free-ranging nature of dogs as well as population and welfare management by sterilising and vaccinating them, she added. The Kanha-Pench landscape is a mosiac of diverse habitats including dry forests, open grasslands, barren lands and scrublands. Photo by Mahi Puri.

Based on the results of the current study, interference competition with dogs could perhaps be one of the greatest threats to hyenas in this landscape, said Priya Singh, a wildlife biologist independent of the study who has studied hyenas in western Rajasthan.

“This is an interesting study that brings to light occurrences of canids, depredation of livestock by them, and the potential threats they face in an important landscape that even though is legally not protected forms an important habitat link between two protected areas,” she added.

This landscape, as with many other similar areas “outside parks” in India, has thus far been in focus for conserving tigers alone, said Srivathsa.

“While this is important, the approach invariably devalues other species and habitats in the landscape. Broadening our definition of “wildlife” to include other important species and rethinking “habitat conservation” to include fragile landscapes like scrublands, grasslands and barren areas will benefit a community of species rather than just one charismatic species and those species linked directly with it,” he said.