Inflation might not have the answers, learnings lay elsewhere

Inflation might not have the answers, learnings lay elsewhere

Ever wondered why those infrastructures, real estate and commodity stocks in your portfolio have been having a stellar run lately?

Hey mate, your team lost to mine at our favourite sport last night (1); time for you to treat everyone to dinner. How about Saturday?

Umm… I owe dinner, I agree. But can’t we do it on Friday? You see, I am on a tight leash here.
What? Are you suggesting that you can afford a meal on Friday, but not on Saturday?
Precisely! Prices on Saturday are twice that of Friday.
Oh, how about Sunday? People go to work on Monday; not that many go out dining on a Sunday and restaurants know that, correct?
Not really. The cheque on Sunday is twice that of Saturday. And, on Monday, it is twice that of Sunday.
Come on mate. You have got to be kidding me.
Midway, you might have caught on that I was referring to what could have been an actual conversation in Zimbabwe, circa 2009. At the height of hyperinflation in 2009, it was so difficult to measure inflation that the Zimbabwean government stopped filling out official statistics.
Hanke and Kwok estimate the peak month of inflation stood at 79.6 billion percent per month or 89.7 sextillion percent year-on-year in November 2008. Or, put another way… prices were rising roughly 131 percent every day!
That might appear a while ago, but the debate rages on. Data published earlier this week showed that US consumer prices rose by 5.4 percent in June 2021, at a faster pace than 2008. Data published this Wednesday also showed that UK inflation hit 2.5 percent in the same period, its highest level since 2018.
The same day, Fed chair Jay Powell fended off a barrage of questions from the US Congress as he sought to ease concerns over the Federal Reserve’s response to surging US inflation.
“I know that people are very worried about inflation. We hear that loud and clear from everybody,” said Powell. But added that, “we do believe that these things will come down of their own accord as the economy reopens—it would be a mistake to act prematurely.”  The 10-year Treasury note traded 6 basis points lower post the testimony and equity markets rallied.
While newspapers and social media feeds are inundated with posts consisting of views from people on either side of the aisle (those who believe inflation is transitory or otherwise), Ha Joon Chang has quite a different take on this in his book Bad Samaritans.
He writes that during the 1960s and 1970s, Brazil’s average inflation rate was 42 percent per year. Despite that, Brazil was one of the fastest-growing economies in the world for those two decades (per capita income rose 4.5 percent p.a.).
Even Korea, during its “miracle years”, was growing per capita income at 7 percent per year, while continuing to have inflation at the rate closer to 20 percent p.a.
Chang, of course, doesn’t argue that all inflation is good: Argentina’s 20,000 percent inflation during the 1990s, Germany in the early 1920s and Zimbabwe’s above are unquestionably bad. It hampers long-range planning, thereby making investment decisions difficult to execute, which in turn impacts jobs and economic growth.
But, in moderation, inflation could be a good thing—something that neo-monetary policy experts completely dismiss.
The post-apartheid Africa National Congress regime in 1994 announced that it would pursue an IMF-styled macro-economic policy (so as not to scare away investors) and kept real interest rates high (10-12 percent), which kept the inflation rate low (6.3 percent). But, this was achieved at a huge cost on jobs and growth.
Chang concludes that when rich countries get into a recession, they usually relax monetary policy and increase budget deficits. When the same thing happens to developing countries, the “Bad Samaritans”, through the IMF, force them to raise interest levels and balance their budgets (stark contrast of Korea in 1997 vs. Sweden in the early 1990s).
Now, let’s bring attention back home; do we know whether India’s inflation (CPI at 6.3 percent, WPI at 12.9 percent) is transitory or not? What we do know is that India sits on an all-time-high food grain stock (food and beverage form 46 percent weight in CPI), that housing (10 percent weight) inflation is absent and pick up in vaccination and supply-side easing could bring in incremental supplies.
While rising commodity prices (incl. oil) and bad monsoons pose risk to this, beyond that, we don’t really know.
But the fun part is, we don’t need to have a great handle on inflation; learnings might lay elsewhere.
Historically (since we have data—1991), equity markets have been ok with inflation rates up to 8 percent, a bit worried till 12 percent and nervous beyond 12 percent. But more importantly, during extreme times, central banks have historically been reasonably tolerant of inflation.
Between 1940 and 1952 (World War 2 periphery), US inflation reached double digits on three separate occasions (1942, 1947 and 1952). Debt to GDP crossed 100 percent in 1947 and infrastructure to GDP stood at a mammoth 1.6 percent. However, during all these periods, US bond yields hardly changed. 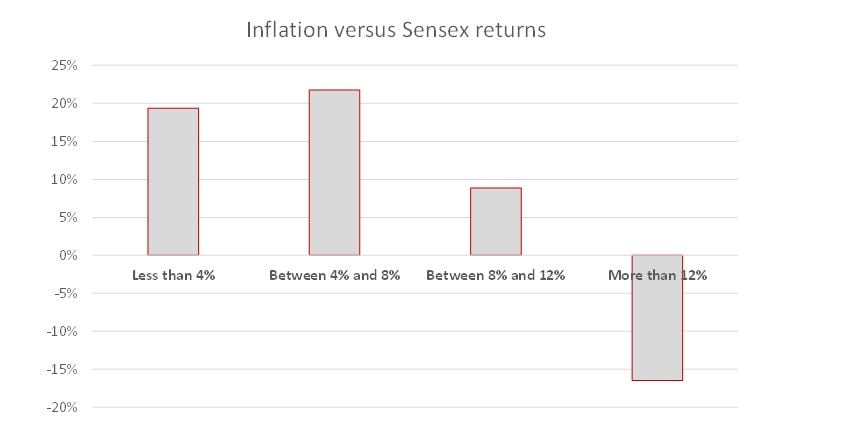 While the jury is still out on whether the Covid zone qualifies as “extreme times”, the reluctance of central banks to act (raise interest rates) in the face of record borrowings by governments and rising inflation does provide an opportunity to get invested appropriately, i.e., in companies that own hard assets, preferably ones that have moderate levels of debt.
Ever wondered why those infrastructures, real estate and commodity stocks in your portfolio have been having a stellar run lately?
Note: 1) I could have used the example of Italy and England, but I fear that it might be too soon to joke about it!
—Jigar Mistry is the co-founder of Buoyant Capital. The views expressed in the article are his own.
Read his other columns here
Disclaimer: Information in this letter is not intended to be, nor should it be construed as investment, tax or legal advice, or an offer to sell, or a solicitation of any offer to make investments with Buoyant Capital. Prospective investors should rely solely on the Disclosure Document filed with SEBI.
(Edited by : Ajay Vaishnav)
Note To Readers

Information in this letter is not intended to be, nor should it be construed as investment, tax or legal advice, or an offer to sell, or a solicitation of any offer to make investments with Buoyant Capital. Prospective investors should rely solely on the Disclosure Documents filed with SEBI. Any description involving investment examples, statistical analysis or investment strategies are provided for illustration purposes only – and will not apply in all situations and may be changed at the discretion of the principal officer. Certain information has been provided and/or based on third-party sources and although believed to be reliable, has not been independently verified; the investment managers make no express warranty as to its completeness or accuracy, nor can it accept responsibility for errors appearing herein.