Updated : October 15, 2019 04:29 PM IST
Gurugram is counted among the worst polluted cities in the world. In 2018, it was declared the worst polluted in an international survey.
To tackle the rising levels of air pollution, the Haryana State Pollution Control Board (HSPCB) stresses that it has prepared a clean air programme for the millennium city.
A large number of diesel generator sets, polluting vehicles and destruction of the Aravalli range is considered to be the prime reasons for the poor air quality in the city.

Gurugram of Haryana is often referred to as the millennium city of India. However, behind the shine and glitter lies an ailing population. Soaring levels of air pollution in the city have become a serious threat to human health.

“My father is a living example. He is suffering a lot due to pollution. His problem with asthma is due to this. There are other people also, small growing kids who have got asthma and other breathing problems just because of this pollution,” said 29-years-old Navika, a resident of Gurugram.

In a report by IQAir, a global air quality monitoring platform, and Greenpeace, Gurugram was declared as the most polluted city of the world in 2018 and its air quality was 17 times poorer than the prescribed safe limit by the World Health Organisation (WHO). Data reveals that the city had only three days in the whole year when the air quality was safe.

Despite this, the government and political leaders have shown a lax approach to deal with the issue. The political apathy on the subject can be gauged from the fact that none of the mainstream political parties in the fray for the 2019 Haryana assembly elections is building their campaign on this critical issue. Gurugram is counted among the worst polluted cities of the world. Photo by Vinay Gupta.

Elections to the 90-member Haryana assembly are scheduled for 21 October 2019, and the results will be declared on October 24.

Haryana has 10 Lok Sabha seats and one of them is Gurugram which has nine assembly seats. The area has a population of over two million. Bharatiya Janata Party (BJP) dominated the legislative assembly elections in 2014 and registered a resounding victory but the representatives of the ruling party say the pollution of Gurugram is a creation of non-governmental organisations and media. Faridabad city, adjacent to Gurugram, is another highly polluted town.

“These reports (of Gurugram being polluted) are not correct. I do not know what is the basis of their saying that Gurugram is polluted. We all live here. I am living in Gurugram from childhood. I don’t see any pollution here,” said BJP leader Umesh Agrawal, who is also the sitting legislator of Gurugram.

However, the principal opposition party in the state, the Indian National Congress, had promised to address the issue of air pollution. In their manifesto for the Haryana legislative assembly elections, they have promised to work “towards the goal of making Gurgaon, Faridabad and other NCR areas pollution-free.”

It also promised to deal with stubble burning to tackle air pollution. “At present, the stubble that is left after Rabi and Kharif crops are harvested is burnt by farmers. We will make modern equipment available to farmers to ensure that no stubble remains. If there is stubble left in the fields, in order to avoid their burning, we will give compensation to farmers for each quintal of stubble. This will also ensure a pollution-free environment,” Congress promised. Dust and pollution rising from a construction site in Gurugram. Photo by Manoj Kumar.

However, people are miffed with the leaders for their ignorance.

“When they need our vote, they come and make all the promises but they do absolutely nothing after the elections are over. Therefore, I now think that it is useless to vote in the election,” said 48-year-old Durga Devi, a resident of Gurugram.

Indian cities dominate the list of most polluted cities across the world and in the past few years there has been a campaign against it. Courts have also pulled up the central and state governments for not doing much on the subject to tackle it. To change that and treat it as a national issue, the central government recently launched a National Clean Air Plan (NCAP).

At present, Gurugram has only two monitoring stations to check the air quality of the city. However, the Haryana State Pollution Control Board (HSPCB) has now decided to install two more air quality monitoring stations. The HSPCB officials told Mongabay-India that a “comprehensive” clean-air programme has been prepared for the city after discussing it with all stakeholders and the board which will ensure strict compliance of norms.

“In the proposed clean air programme for Gurugram, we have provisions to curb pollution from construction activity and road dust. Besides we have made rules to control emissions from industries, biomass burning or any other kind of pollution,” Kuldeep Singh, the regional officer of HSPCB, told Mongabay-India.

Gurugram is home to offices of many big national and international companies due to which there is a high vehicular movement in a small radius of the area resulting in high levels of air pollution. It is also a hub of more than 300 big and small industries that often flout the air pollution norms. The massive construction activity in the region also aggravates the dust problem. 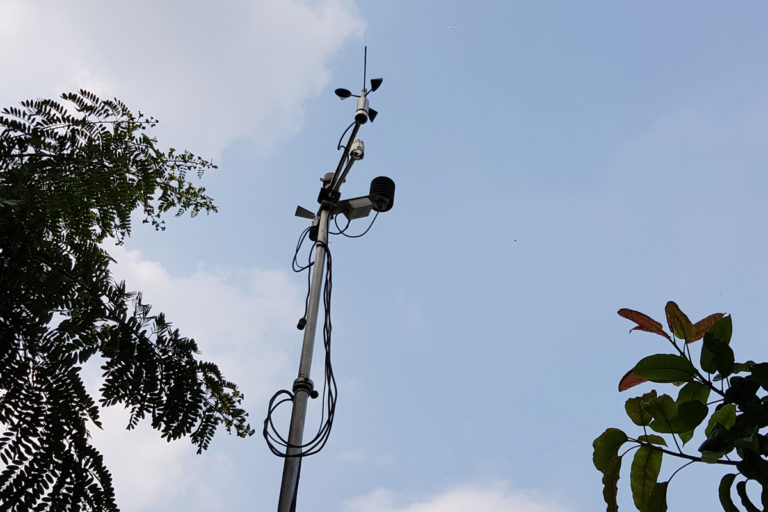 At present, Gurugram has only two monitoring stations to check the air quality of the city. Authorities are planning to install two more. Photo by Hridayesh Joshi.

Another problem is the use of a large number of diesel generator sets. Besides shopping malls, markets and offices, thousands of residential apartments run on diesel generators as well.

“In Gurugram there are several dozens of societies (residential apartments) having no electricity connection. When I say society, it doesn’t mean that 20 or 30 houses. There is no society having less than 200 homes. In these apartments (diesel) generators run round the clock. The pollution caused by it is a great trouble for everyone,” said RTI activist Harinder Dhingra.

It is the case because in some societies the builders have not fulfilled all the requirements due to which the builder has not got a completion certificate in absence of which the society is not provided with an electricity connection and entire power supply is from diesel generators.

Environment Pollution (Prevention & Control) Authority (EPCA) had issued directions that a ban will be imposed on generators in Haryana after 15 October but the state government has said that the ban is only when the air quality drops to “very poor” and “severe” category.

So it remains to be seen, especially with Diwali coming up, how effectively the ban is imposed. Diesel generators used non-stop in commercial and residential centres are worsening the ai quality of Gurugram. Photo by Hridayesh Joshi.

Environmentalists argue that the city has lost all its green cover to massive residential and commercial construction. They state that even as politicians live in denial, a few citizens groups are making efforts to revive and protect the greenery in the town. What worries them the most is the destruction of the Aravalli hills by illegal miners as it provides some protection to the millennium city and other adjoining areas around it from dry winds coming from the Thar desert. They fear that if this last barrier falls the condition of air pollution in the city would worsen.

“Gurugram, Faridabad and Delhi together have more than 56,000 acres of Aravalli. Such a big landmass with good forest cover with millions of trees acts as a massive green lung. Our air quality would have been much worse in its absence,” said environmental activist Chetan Agrawal, who has been demanding the government to declare Aravallis a protected zone.

Aravalli is also important as it acts as an anti-desertification barrier for the whole Delhi-NCR region.

“When we look at the Google Earth images of Aravalli in the western flanks, there are big deposits of sand or sand-dunes. So, basically, all the hot winds which come from the west and carry sand with them, they get deposited at the western flank. So, from that perspective as well, Aravalli is very important,” said Agrawal.