Economists said with persistently tight domestic credit and weak corporate profits, India's recovery could be delayed and the pick-up would remain below potential. Economic growth could dip to around 4 percent in the September quarter, two domestic television channels said on Wednesday, citing government sources.

India's economy probably expanded at its weakest pace in more than six years in the quarter to September, a Reuters poll showed, as consumer demand and private investment weakened further and a global slowdown hit exports. The median of a poll of economists showed annual growth in gross domestic product of 4.7 percent in the quarter, down from 5.0 percent in the previous three months and 7 percent for the corresponding period of 2018.

Economic growth could dip to around 4 percent in the September quarter, two domestic television channels said on Wednesday, citing government sources.
If the latest figure for expansion of gross domestic product is 4.7 percent or less, the quarter will have registered the slowest expansion in 26 quarters, since 4.3 percent in January-March 2013.
Prime Minister Narendra Modi's government has taken several steps, including cutting corporate tax in September, to boost investments and bolster economic growth. 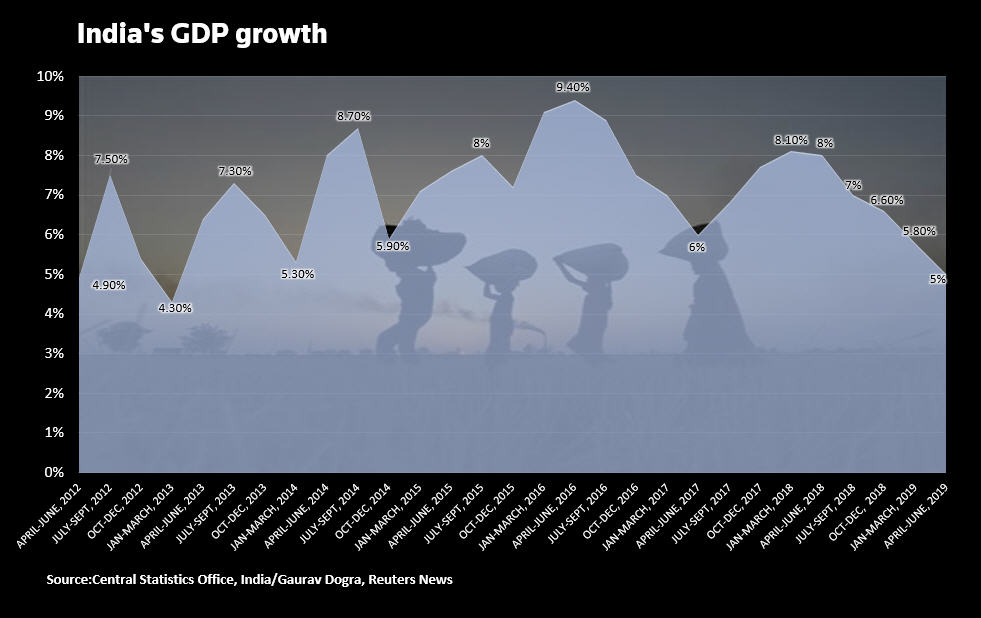 Economists in a Reuters poll predicted the Reserve Bank of India would cut its repo rate for the sixth time in a row, by 25 basis points, to 4.90 percent at its December 3-5 meeting.
"Agrarian distress and dismal income growth so far, coupled with subdued income growth expectation in urban areas, have weakened consumption demand considerably," said Devindra Pant, chief economist at Fitch arm India Ratings and Research.
"Even the festive demand has failed to revive it," he said, citing data on non-food credit, auto sales and select fast-moving consumer goods.
"ECONOMIC EMERGENCY"
On Wednesday, in a heated parliamentary debate on the economic slowdown affecting jobs, opposition parties said million of people had lost their jobs and the country faced a "economic emergency".
In her reply, Finance Minister Nirmala Sitharaman said the economy faced a slowdown but no "recession" and cited several government measures to support economic growth.
On Thursday, she sought parliament's approval to spend $2.7 billion in addition to a budgeted 27.86 trillion rupees ($388 billion) in the 2019/20 fiscal year.
Economists said with persistently tight domestic credit and weak corporate profits, India's recovery could be delayed and the pick-up would remain below potential.
India needs to grow at around 8% to create enough jobs for its millions of young people joining the labour force each year.
The unemployment rate in October rose to 8.5%, its highest since August 2016, according to the Centre for Monitoring Indian Economy (CMIE), though the government estimates that urban unemployment declined.
Some economists, however, said economic growth could pick up in the second half of the current fiscal year, after the government took steps to support real estate and non-bank finance companies.
"The economic slowdown has bottomed out in the September quarter," said N.R. Bhanumurthy, an economist at the National Institute of Public Finance and Policy, a Delhi-based government think tank.
"With easing of credit and pick up in festival demand, economic growth is expected to pick up from October onward."
Check out our in-depth Market Coverage, Business News & get real-time Stock Market Updates on CNBC-TV18. Also, Watch our channels CNBC-TV18, CNBC Awaaz and CNBC Bajar Live on-the-go!