According to a new survey, India is now home to the fourth largest number of billionaires across the world.

As per the details that emerged from ‘The Wealth-X Billionaire Census 2018,’ by Wealth-X, the number of Indian billionaires in 2017  increased by 22.4% to 104 since the previous year.

According to the report, the rise in the fortunes of Indian billionaires owe a lot to the reforms taking place in the country. “Across India, ongoing efforts to improve the business environment via tax reforms, infrastructure spending and market deregulation delivered positive investor gains and boosted net worth among the ultra-rich,” said the report.

"The trend will persist due to young and expanding workforce, high savings rate and rapid urbanisation drive in the country," the report said.

The report further suggested that India could soon break in to the top three if it continues with the present momentum.

India, that ranked seventh in the previous survey, also saw the total wealth of its billionaires closing in on the $300 billion mark in addition to a 50.3% growth in wealth.

Besides, the overall growth of billionaires in the country, India’s financial capital, Mumbai, also made a mark in the list. 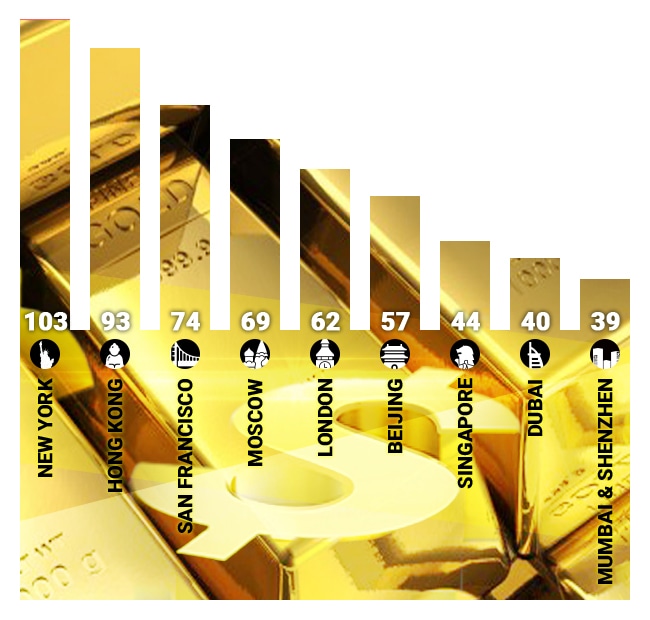 Asia On The Rise

A key revelation from the report was the rise of Asia in the global arena.

The surge was mainly due to the rise in billionaire populations in China and Hong Kong along with India.

Sports, A Key Beneficiary Of Rise In Billionaire Numbers

Another key output that emerged from the survey is how investments in the field of sports become a direct beneficiary of rise in economic fortunes.

Citing the examples of Indian Premier League (IPL) and Chinese Super League football, the survey highlighted how investments by Asian tycoons have increased in the field.

According to the survey, the IPL has revolutionised the game by spurring the creation of similar short-form tournaments in almost every major cricketing nation.