Updated : May 30, 2019 08:37 AM IST
New research indicates that most forests in India are highly resilient to impacts of climate change on rainfall.
Wetter forests in India are resilient to large rainfall changes, while forests in drier landscapes, such as the Deccan peninsular region, are most vulnerable to significant climate change.
Despite their resilience and contrary to government claims, forest cover continues to decline in extent and quality in India, due to human activities.

Some glad tidings from the bleak field of climate change science. New research from the Indian Institute of Technology (IIT), Kharagpur, shows that a majority of Indian forests are exceptionally resilient to large variations in rainfall and short droughts caused by climate change. The research, which used canopy cover and rainfall changes as criteria to deduce resilience, revealed that forests in wetter regions and scrubs in drier regions would be more resilient to rainfall decline.

Scientists use climate and vegetation models to predict the impact of global climate change on Earth’s ecosystems. In this case, the IIT study compared long-term trends in spatial distribution of Indian forests, against corresponding rainfall records. This inquiry of how India’s vegetation cover responded to precipitation between 2000 and 2017 provided positive news – forests have been surprisingly resilient to changing rainfall patterns.

This novel research has generated a “forest cover resilience map” which could be used to frame uniform and improved climate-adaptive conservation and management policies in India. Interestingly, the study provides a “precipitation threshold” of forest cover resilience – which helps scientists estimate the tipping point beyond which forest cannot easily recover. They claim that forest cover would remain resilient at rainfall levels over 1400 mm per year. But do these findings reflect ground reality? Previous studies at both the national and regional levels have indicated that forest grids spread across India are vulnerable to climate change. In the state of Uttarakhand, for instance, up to 80% of forest has been shown to be sensitive to climate.

“This is a very significant result but it is drawn by considering only one, that is, precipitation, of the several factors such as temperature, soil, and anthropogenic influences that have major influence on existence and sustainability of forests at a location,” observes Jagmohan Sharma, additional principal chief conservator of forests, Bengaluru.

Can our forests survive climate extremes?

The team from IIT studied the survival probability of forests and other vegetation types in a changing climate regime. They used open source data on tree canopy cover percentage to map the spatial distribution of forest, scrub, grassland and treeless areas in India, and assessed their links with long-term annual rainfall. Natural forests were found in areas with 340–8650 mm rainfall, scrubland in areas with 196–1018 mm, grassland at 167–995 mm and treeless areas at 34–965 mm rainfall.

The scientists reported in the journal Biodiversity and Conservation that only 0.02% of the total forest cover in India – in the dry regions of the Trans-Himalayas – was estimated to be “least resilient”. Forest in wetter areas such as the Western Ghats, Western Himalayas, Eastern Ghats and Northeast India are predicted to be “highly resilient”. So, the “majority of forest covers in India are extremely resilient” to large precipitation changes in addition to the shorter drought periods. In contrast, scrubland was estimated highly resilient in drier regions and least resilient in wetter regions.

The scientists also stated that the “forest cover resilience curve saturates about 1400 mm precipitation”, which indicates that forests would be resilient at rainfall levels of over 1400 mm while the scrubs would not be very resilient.

For example, if a forest regime receives 3000 mm precipitation on average, a decrease or increase in precipitation by 500 mm may not change its resilience by much. However, if another regime receives 1500 mm, the same change of 500 mm rainfall would impact the resilience “significantly” Pulakesh Das, one of the study authors, explained to Mongabay-India.

Therefore, forests in the drier landscapes may experience alterations due to climate change. “Although, the seasonal dry tropical forests in the Deccan Peninsular region are tolerant to drier periods or drought events to some extent, they are the most vulnerable forests to large changes in climate,” he said. 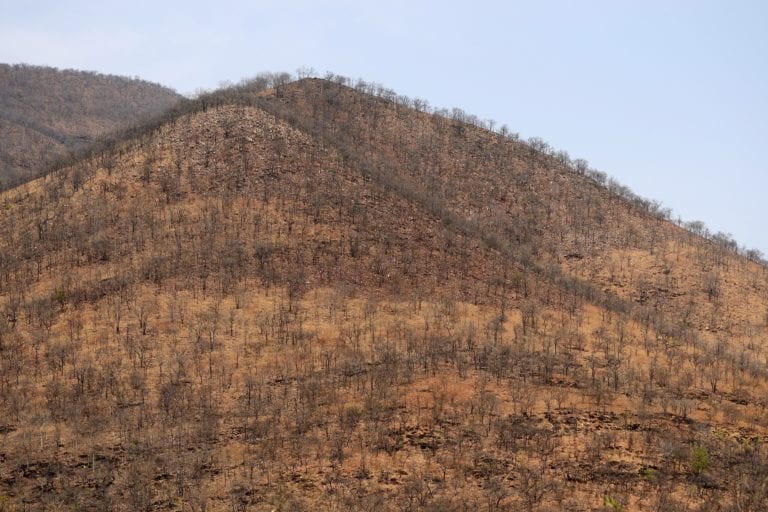 Forests in drier regions such as this one from the Sri Lankamalleswara Wildlife Sanctuary in Andhra Pradesh are most vulnerable to climate change. Photo by P Jeganathan/Wikimedia Commons.

Das added that his study offers several new insights. For instance, the probable precipitation thresholds that support various stages of vegetation, “is rarely reported in the context of regime shift,” he noted. Also, the relation between vegetation and precipitation, which were developed with global observations, did not fit well with the ground realties of Indian forests. His study helped update the methods adopted in global studies, by eliminating human activities to understand the forest cover, and including land use change and forestry maps, which provided new results and interpretations.

Forests are vulnerable despite their resilience

Previous research by a team of scientists from Indian Institute of Science (IISc), Bengaluru, helped prepare a vulnerability index for forested grid points in India. Their 2011 study concluded that vulnerable forests were concentrated in the upper Himalayas, parts of central India, and northern portions of the Western and Eastern Ghats in India. In contrast, forests in northeast India, southern Western Ghats and eastern India were estimated to be least vulnerable.

Their analysis, published in 2018, reported that 80% of forests of this region are sensitive to climate. Worryingly, less than half the forest area had the capacity to bounce back from impacts of climate change. It is therefore important to investigate options for improving adaptive capacity of these forests, while evaluating the causes and remedial measures for reducing their sensitivity, this report says.

Kumar affirmed that the research from IIT, Kharagpur, offers new direction as it mentions resilience and tipping point of Indian forests under varying precipitation regimes. “However,” cautioned Kumar, “we need to test other climatic drivers and precipitation alone may not well justify the purpose”. Hence, the new study is “a beginning in Indian context.”

Meanwhile, other Indian scientists have reported a decline in the country’s forest cover, contradictory to government claims of an increase in forest cover from 7,01,673 square kilometres in 2015 to 7,08,273 square kilometres in 2017. At least three groups of scientists independently reported that natural forests across India are disappearing, with serious degradation in core forest areas.

The reports, based on a mix of satellite data, ground observations and historical maps, found that the Eastern Ghats have lost 15.83% of its forest area over a span of almost 100 years; tropical montane forests continue to disappear in the Sikkim Himalayas, particularly at lower altitudes; and there is noticeable decline in quality across all forest types in India.

Das conjectured that much of the forest cover decline observed in India is due to human activities. He cited the example of north east India, where the climate is favourable for forests but the wide practice of shifting cultivation has caused forest loss.

Kumar agreed that the impact of human activities should be factored in. “Our study on forest resource dependence and ecological assessment of forest fringes in rain-fed districts of India for 275 districts at national level suggests that the dependence of the forest fringe communities is significantly high on the forests for meeting their subsistence needs and they are the first and immediate drivers of forest decline, rather than climate change.”

The role of human activities came as no surprise to Sharma who has researched climatic and non-climatic stresses on forests. “It is understood that during the first half of the 21st century, non-climatic factors are a dominant influence on the Indian forests, while the climatic changes will have overwhelming influence thereafter,” points out Sharma. “In this context it is critical to understand as to how the non-climatic factors would drive the vulnerability of forests and consequently their resilience ability before climate becomes a dominant influence.” A girl climbing Quercus lanuginosa tree to cut fodder in Askot Wildlife Sanctuary: human impact on forest cover has been excluded from the study on forest resilience. Photo by A. J. T. Johnsingh, WWF-India and NCF/ Wikimedia Commons.

His team’s study, using ensemble climate data from five climate models and two global vegetation models suggests that current forest in more than a third of forest grid cells in India will undergo shifts due to climate change, and current forests status would no longer be applicable then. Also, current model-based assessments do not take into account non-climatic factors such as cattle grazing and man-made fires that can “dramatically modify the impacts under climate change.”

That said, Sharma’s team too concurred with Das’s findings that forests in higher rainfall zones are less likely to be impacted by climate change than drier forests.

Kumar mentioned that national-level studies for such inferences are limited and scientists need to adopt varied approaches, including testing of multiple vegetation models under multiple climatic scenarios, to communicate findings with more confidence. “We also need to develop regional vegetation models that could give the prediction at finer resolution with greater accuracy,” he added. And ensemble models using a mix of various prediction models, could provide a more comprehensive picture.