Updated : May 06, 2019 04:40 PM IST
Number of forest fire incidents have escalated in 2019 in Kerala.
The fires in Munnar’s Vattavada region and the Kurichiad range in Wayanad together brought down hundreds of hectares of forest. The actual figure is debated.
Officials and environmental activists claim that all fires are manmade and harmful, while some scientists say controlled fires have positive impacts on certain forest ecosystems.

When summer strengthens, it brings with it dry spells and the season of forest fires.

Since January 2019, a number of fire incidents have been reported from Kerala. In the last week of March 2019, a major fire broke out in Munnar’s Vattavada region in Idukki. Many forest areas in Pazhathottam, Jandamala, Kadavari, Anamala were ablaze.

Though forest officials claim that less than 100 hectares of forest were burned, environmentalists stress that around 1000 hectares were reduced to ashes.

“We did not have major fires in the previous year, this year some of the locals had clashes with forest officials, [and] they set fire as a revenge,”  Eravikulam Wildlife warden R. Lekshmi told Mongabay-India. She said that loss was less than 100 hectares by adding that the forest department was quick enough to control the fire.

Opposing R. Lekshmi, a government officer and an environmentalist, who sought anonymity said that around 1000 hectares were gutted in the fire.

“Forest department did not give permission to cut eucalyptus trees planted by locals as part of social forestry, that was the main reason this time. Forest officials were unable control fire initially and it is very difficult to calculate the loss as the fire spread in a vast area. The sight was heart breaking for anyone who loves the environment,” he said.

He said that the fire also affected the Neelakurinji (Strobilanthes kunthianus)sanctuary — something which the forest department has denied.

“Some people who own land inside Neelakurinji sanctuary were also involved in this. They are against this sanctuary because it stands against their business interests,” the same person alleged. Officials struggling with the fire at Vattavada, Munnar. Photo by Joby George.

He added that as the fire was doused from one side, another major fire broke out simultaneously from a different direction.

“Ten days after the major fire was doused, another fire broke out in Kottakambur in the Neelakurinji sanctuary on April 16. Since the last week of March, different parts of the forest were set ablaze like this,” he added.

The fires at Wayanad

Another major fire reported from Kerala in this season was from Wayanad. More than 60 hectares of forest was gutted in a fire, which broke out in six areas in Kurichiad range of Wayanad Wildlife sanctuary (WWS). The forest department said the fire was man-made and intentional.

“The fire broke out in Vadakkanad area, where few people were conducting protests asking forest department to capture a problem elephant Vadakkanad Komban. The fire incidents were connected to this protest,” N.T. Sajan, deputy conservator of forests and wildlife warden, WWS, told Mongabay-India. He said that fires were set simultaneously at different places.

As per unofficial information, more than 100 hectares of forest were gutted in fires in January and February in Wayanad alone.

In 2017, from January to March (just 3 months) 2,100 hectares of forests were burnt in 440 fire incidents, Kerala forest Minister K Raju had said in a press meet that year. In 2018, fires were less compared to previous years.

In 2019, the number of fire incidents has escalated. According to the forest fire alert system run by the Forest Survey of India, 38 large fire incidents have been reported from Kerala alone.

In the months of January and February, 558 forest fires occurred in the five southern states of Andhra Pradesh, Karnataka, Tamil Nadu, Telangana and Kerala, according to FSI data. This is about 37 percent of total fires in the country. All fires are man made

Forest Survey of India (FSI) has identified 1719 forest fire points in Kerala. Karnataka has 7,352 fire points, many of which share boundaries with Kerala.

Environment activists and forest officials firmly state that all forest fires in Kerala are man-made. “Forest fires are not natural. People set fire intentionally or accidentally. A minor clash with a forest officer for not allowing them to walk through the jungle, locals who were charged with a case for breaching wildlife laws — can be the reasons for people’s rivalry and they set fire. There are even cases where people set fire for fun,” Sajan said.

Wayanad Prakrithi Samrakshana Samithi president N. Badusha recalls that many decades ago tribal people used to set fire in forest for the bushy growth of grass after monsoon, and for easy collection of forest resources, among other reasons.

“But now they are aware of the hazards and they don’t do it. On the other side, there are a lot of people who burn forest intentionally.”

Badusha points out that human-animal conflict is a major reason for people to set forests ablaze. “In order to get rid of wild animals entering human habitation they do it, but they don’t realize that setting fire would force wild animals to enter their farmlands as their habitats are being destroyed. In the case of recent fire, a group of people was protesting to capture a problem elephant, Vadakkanad Komban. One of the leaders of the group publicly announced in a meeting that they would burn the forest if the elephant was not captured. Third day after the speech forest was set ablaze,” he added.

He also said that a small irresponsible act by people living around the forest can also cause a major fire. “A carelessly thrown cigarette is enough to burn hundreds of hectares,” he added.

Since people own farmlands close to the forest they use fire to get rid of wild animals, but in summer these fires get easily spread into forest unknowingly. The aftermath of the massive fire at Vattavada, Munnar. Photo by Joby George.

Debate on whether fires are a boon or bane

Recently, six scientists Abi Tamim Vanak, Ankila Hiremath and Nitin Rai of the Ashoka Trust for Research in Ecology and the Environment (ATREE); Raman Sukumar of the Centre for Ecological Sciences at the Indian Institute of Science (CES-IISc); Jayashree Ratnam of the National Centre for Biological Sciences (NCBS); and Tarsh Thekaekara of The Shola Trust, had written an open letter saying controlled fires are necessary for forest management.

Tarsh Thekaekara said in an interview with Mongabay-India, “Uncontrolled high-intensity fires are highly detrimental, there is no doubt. The way to stop this is through low intensity controlled burns.”

He also states that those who set fire in the forest are not always ‘miscreants’. “The idea of ‘miscreants’ is problematic. Villagers have been burning forests for centuries, they became miscreants when colonial laws were put in place. Only today and in India, they are called miscreants. In Australia and Africa people who burn are called conservationists! In Kaziranga also, even today, the Forest dept themselves burn the entire park in small sections as a part of habitat management,” he added.

The scientists have claimed that fires help the forest to revive dormant seeds, suppress invasive species, weeds and also help in the elimination of hemiparasites that cause destruction of adult trees.

On the other hand, environmental activists oppose this viewpoint. They claim that a destroyed forest is a perfect habitat for invasive flora. Badusha said that there are many examples to prove that forests are not regenerated even 25 years after a major fire.

“Four years back, a major fire broke out near Thirunelli in Wayanad. There was even a crime branch inquiry after the fire. In that area still, we can see burned trees and plants. No regeneration happened even after four monsoons,” he said while adding that the area is full of invasive plants and trees.

Tarsh Thekaekara has a different opinion. “Grasses will come back after one rain, and this is vital for herbivores. Trees may take one or two years at the most. Parasites and ticks will be much reduced. Dead biomass will be cleared allowing for new regeneration.”

N.T. Sajan also confirms that burnt forest turn into green after one or two monsoons. 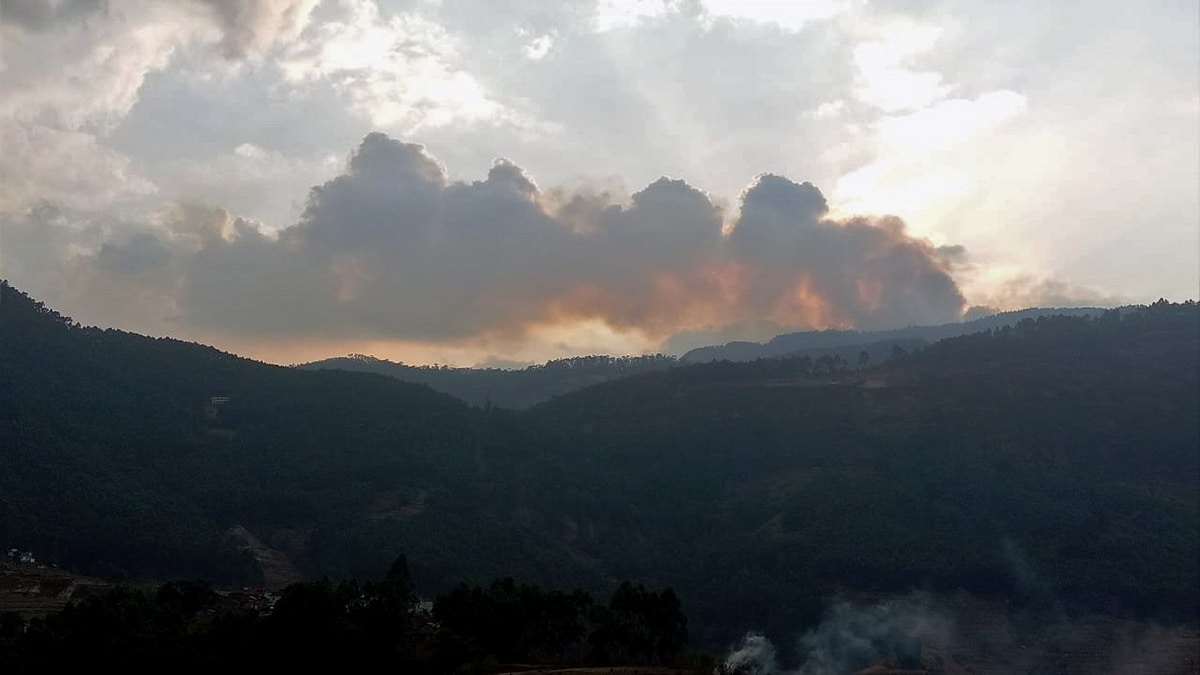 A smoky landscape after the fire. Vattavada, Munnar. Photo by Joby George.

Tarsh Thekaekara counters the opinion that fire promotes invasive species. “We don’t know enough as of now – there are been very limited research about invasive and fires. Adivasis say lantana will be controlled by fire, but since it is a new plant, it is hard to say.”

Anitha S, an ecologist and environmental activist who coordinates the Tree Walk at Thiruvananthapuram, finds fires a curse on the environment. “In a fire, soil loses its nutrients, that it will take years to restore. Subsoil layers can be destroyed in fires. Habitat of reptiles, birds and animals are destroyed brutally in a fire.”

Once a forest area been burnt the water sources inside the forest can easily dry up, she added.

In Munnar, environmentalists claim that people who had set fire in Vattavada use water from Pambadum shola, the smallest national park in Kerala; they don’t realize that the national park can easily vanish in a major fire.

Badusha said, “The sight of dead animals and birds, their partially burnt carcass, is unbearable.” He recalled how a mother jackal and her three kids were found burnt in the Thirunelli fire. “Animals, including endangered species birds and reptiles lose their habitat, by an irresponsible act of humans,” he added.

Tarsh Thekaekara is of the opinion that all habitats except rain forests are adapted to fire. “All the areas burnt in Bandipur in March have lush green grass after this one rain. Are grasses not good for wildlife and do we only want trees? Slightly drier forests (many parts of Wayanad) are well adapted to fire,” he added.

Even few Adivasi (tribal) leaders who sought anonymity told Mongabay-India that fire is an inevitable tool in forest management. “We had used fires earlier to get lush green forest. The newly sprouted grass and plants help wild animals as well as our domestic animals. Fire also cleans and purifies forests,” one of the tribal leaders said.

But they stopped setting fire in their environment as the forest department has totally banned it.

However, the scientists do agree to the facts that uncontrolled and devastating fires have a significant negative effect. They also say that evergreen and rainforests are not adapted to fire. At the same time, they stress the positive impact of fire in dry and deciduous forest ecosystems. They say preventing huge fires with controlled fires is an ideal solution.

National Forest Commission in 2006 had even suggested that forest fires should be considered as state disasters. There is also a call for long-term policy for fire management.