How to solve the North-South conundrum

Updated : April 27, 2018 12:15 PM IST
The 15th Finance Commission’s decision to use the 2011 census instead of the 1971 census for distributing tax revenues among states has triggered a furious debate on the North-South divide in India.
The concerns of southern states that they are being penalised for following policies that have reduced population are valid and need to be addressed, but not at the cost of depriving the people of Uttar Pradesh and Bihar the allocation of funds.
Uttar Pradesh and Bihar need more funds, but the state governments must focus on population control and sectoral growth in key areas.

Do a quick Google search for the term “North-South” divide, and you will find that India is not the only one where there is a clear income and development gap between the two.

Some are geographic – one part was more adept at exploiting natural resources, including fertile land. The other more adept at industry.  But it exists. And, coupled with an economic divide, there is often cultural and historical differences – all of which make for a complex mix in the 21st century.

The Gap Is Showing

In India too, the North-South divide is pronounced – in terms of culture, language, cuisine, and development. In the years post-independence, right up to liberalisation, it was neither uncommon, nor anti-national, to read columns on a united south as a utopian entity – separate but equal to the North.  In the post liberalisation years, that murmur all but subsided.

But, in the last year or so, the chatter on this issue is back in full force. And, at the core of it is the terms of reference of the 15th Finance Commission’s decision to use the 2011 census instead of the 1971 census for distributing tax revenues among the states. And, the Finance Commission has a point.  In 1971, the population of India was around 548 million. By 2011, the figure had more than doubled and touched 1.21 billion people.  If we look at the central budget being allocated on a per basis , it is more prudent to go with the 2011 figure than the 1971 figure (see below). 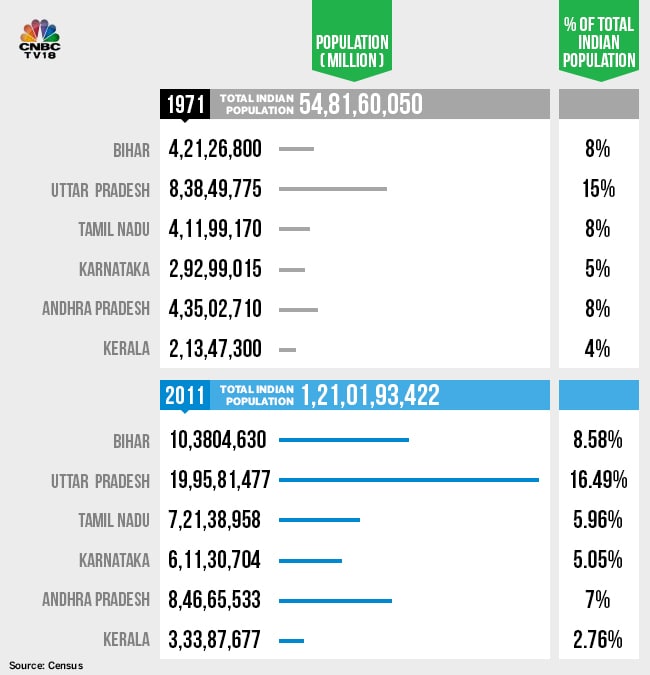 On the other hand, the southern states believe they are being penalised for following policies that have reduced population, increased per capita income, and brought development. And, these are valid concerns that need to be addressed, but not at the cost of depriving the people of Uttar Pradesh and Bihar the allocation of funds.

However, this demographic divide is something that this and future central and state governments will need to be cognisant about, in the years to come. And, the core is the fact that the people in Uttar Pradesh and Bihar a - 25% of Indian population  - are living on approximately Rs120 and Rs 86 per day respectively (see below). 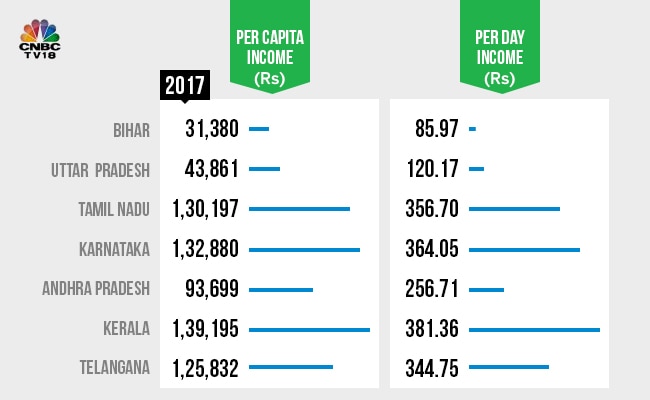 While this may seem like a threatening gap, it is also an opportunity. As the world slows down, and India gears up to be hit by this slowdown, the government of India needs to make lifting people in Uttar Pradesh and Bihar out of poverty. A threefold time jump in the living income of the poorest in India is going to be beneficial for India as a whole. What Uttar Pradesh and Bihar need is not less funds, but more. To jump-start industry, to revitalise agriculture, to create new business, to generate employment.

To  achieve this the states need to focus on two things. One is population control, and a lesson is to be learned from how Bangladesh used door to door contraceptive delivery, to empower women with contraception. The second is sectoral growth in key areas. The government needs to look at the states as key industry zones and develop them in tandem with rolling out a massive skilling programme.

It isn’t that the talent doesn’t exist. What is lacking is a 360-degree policy from the state governments that is focused on one and only one goal – how do you raise the per day income of the state three-fold in the next ten years. Whether chief ministers Adityanath and Nitish Kumar are up to the challenge is yet to be seen.