Updated : August 14, 2019 05:24:12 IST
A project in central India is working with 6000 cotton farmers to encourage them to move to organic farming.
The cotton fields are also part of tiger habitat in the region and sustainable land use is aimed towards conserving the quality of these habitats and tiger corridors.
By creating market linkages for the farmers, the project aims to balance out the economic benefits with environment conservation in the region.

Twenty-six-year-old Laxmi Salami comes from a long line of farmers who have remained true to the tried and tested ways of cotton cultivation that they know. Not surprisingly, she was unwilling to stray from the well-trodden path, into organic farming, an unfamiliar territory for her.

But when the young cotton farmer, hailing from Gajandoh village in Chhindwara district of Madhya Pradesh, reluctantly agreed to participate in an organic farming project and try something new on her field, the results were a welcome surprise. “Last year, I harvested 12 and a half quintals of traditional cotton in seven acres. I sold it all for Rs. 62,500, but my costs towards pesticides, fertilisers and labour came to almost Rs. 40,000, so my net profit was not much,” she says of her experience with cotton farming before the intervention. Now, on the remaining one acre of land where she experimented with organic cotton farming, her production costs have been negligible and her profit from the one acre cultivation, a 100 percent.

She learnt how to make organic manure, insecticides and pesticides using locally available material, thus avoiding the expenditure on chemical fertilisers and pesticides. “Earlier, I used harmful and strong chemical pesticides for spraying. These also affected my health.”

Situated in central India, Chhindwara district is home to two of the country’s oldest nature reserves – the Pench Tiger Reserve and Satpuda Tiger Reserve, famous for their untouched biodiversity and the habitat of the iconic Bengal tiger. In between the two reserves live thousands of small-scale cotton farmers like Laxmi who play a key role in preserving the fauna and flora of the area. They are shifting to organic cotton farming under a project by the World Wide Fund for Nature – India (WWF – India); the C & A Foundation, a Swiss-based corporate foundation; Neutral, a leading Danish company making 100 percent certified organic cotton products and SRIJAN; a local NGO. These groups joined forces under the Organic Cotton Project launched in 2015-16, to promote organic cotton agriculture in this area where both the farmers and wildlife can thrive. A total of 128 villages and 6000 farmers have been covered under the project so far.

“Sustainable agriculture plays an important role in conservation. It is an important piece of the puzzle. When farmers manage their land sustainably, they can help preserve critical habitats by improving soil and water quality,” says Sejal Worah, Programme Director, WWF India. “This, in turn, enhances their agricultural productivity in the long term. In this case, promoting organic cotton in areas where agriculture and biodiversity interact could create a win-win scenario for farmers and wildlife.” The cotton fields, for example, also function as an important tiger corridor as tigers wander between the two adjoining nature reserves. 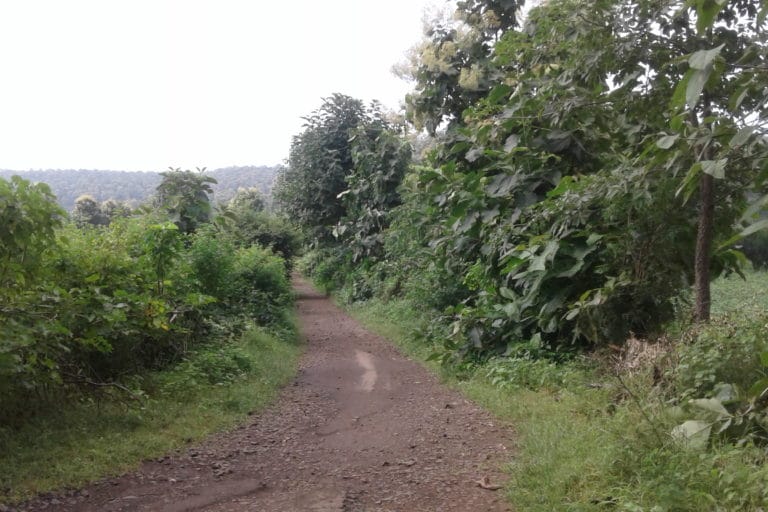 The cotton fields also function as a tiger corridor and sustainable land use is aimed towards conserving the quality of the tiger habitat in the region. Photo by Nitin Jugran Bahuguna.

“Farmers may not immediately link the connection between organic farming and tiger conservation, but they understand that chemical farming is detrimental to the forest ecosystem and contaminates the soil, water and vegetation on which wildlife thrives,” says Dhar.

Before the intervention, the farmers were involved in conventional farming, using toxic pesticides and chemicals which lead to damage of soil and groundwater. “It takes three-four years to eliminate residues of chemicals and successfully restore the soil. In this period farmers’ output is declining, making it difficult to earn enough to survive,” according to Lars Bech, founder of Neutral, that has bought organic cotton from 979 farmers in the region. In Madhya Pradesh, he says, about 14,000 cotton farmers live and work side by side with the tigers.

The project aims towards a sustainable landscape wherein economic benefits are being achieved through reduction of off-farm inputs and premium market accessibility while environmental benefits are gained through ecosystem services that organic agriculture is bringing such as soil improvement, biological pest control, pollination and water flow.

Experimenting with the new method has been both challenging and rewarding for Vishaka, 40, and her husband Kirtiraj Bagre, 44, of Koprawadi village in the same district. Now into their third year of organic cotton farming, their yields, though small, have grown progressively and the soil quality has improved with each sowing. “In the first year, we reaped only 50 kg of cotton as the land was not favourable for organic farming,” says Vishaka. “In the second year, we prepared organic manure and sprayed as advised and doubled our output to one quintal (about 100 kg). This year, we reaped four quintals (about 400 kg).”

The couple says they grew conventional cotton to the tune of 18 quintals this year which they sold for Rs. 100,000. Their input costs (labour and chemicals) amounted to about Rs. 40,000. Whereas in growing organic cotton, albeit of a lower quantity, they used only bio-friendly manures and sprays which they made from cost-free local resources, so the profits they got from the sale were 100 percent.

The project emphasises the need to replace harmful chemical pesticides and fertilisers with environmentally-friendly manures and sprays, which have also been beneficial health-wise to the farmers. “The chances of infection are minimal because we use bio-friendly manure and fertilisers using locally available material and we do not have to cover our faces as we did earlier while using chemical sprays,” says Kirtiraj.

The couple has also learnt the importance of spacing their saplings, a key practice in organic agriculture. “Earlier, my spacing of the cotton saplings was not precise and I would just spread them out on my land. Now, I know the importance of spacing the saplings at a distance of three-by-three feet which is called ‘space marking’ and to grow another crop along with the cotton plant in order to make the plant stronger as well as to give myself an additional crop in the same area. The quality of our tur dal (pulse) has improved because of the natural manure we are using,” adds Vishaka. The practice of planting another crop alongside the cotton sapling is called inter-cropping and is one of the salient features of the project.

Hemant Rao, 45, of Marram village, is also happy with the new method, having reaped two quintals of cotton which he grew organically on one acre. “I got a premium rate of Rs. 5,200 per quintal from a private company desiring organic cotton. So, my total earnings of Rs. 10,400 were my net profit as I spent nothing on production costs,“ he states proudly.

The objective of setting up the project at the fringe of the forest is to provide access of premium market to the farmers who are complying with global practices such as organic certification, states Murli Dhar, Director of WWF’s Sustainable Agriculture Programme, which is implementing the project. “This will help to minimise the risk of farmers from market volatility which often we are witnessing in India,” he noted. A more stable and economically valuable livelihood from organic farming would then have further impact on the quality of habitat and environment which would benefit wildlife conservation in the region.

Trainings and demonstrations on adopting improved agronomic practices, soil and water conservation techniques, inter-cropping, pest and disease management and cotton quality and marketing are regularly held for the farmers at meetings conducted in their respective villages.

Farmers like the Bagres, Hemant Rao and Laxmi Salami are now selling their organic cotton through the Chhindwara Organic Farmers Enterprise (COFE), a cooperative created under the project to help farmers get a premium price for their cotton through private suppliers and exporters.

COFE was formed in 2013 and got registered in November 2015. “However, in 2017 we decided to change our strategy by instilling ownership in the women and making them realise that COFE is their own company,’ states Preetam Pradhan, Family Livelihood Cluster Promoter (FLCP) at SRIJAN, WWF India’s local partner in the district. “We involved representatives from 107 women’s self- help groups (SHGs) created under the project to maintain data, set up targets on a daily basis and also work on the grading of cotton seeds for sowing. Currently, we have 710 new shareholders from Chhindwara, Mohkhed and Sausar Block and have collected a share capital of Rs 198800,” he adds.

According to Sandip Bhujel, CEO of COFE, the objective is to link the farmers directly with the market. “We collect the farmers’ cotton from village-level collection centres (VLCCs), about 20 of which have been set up in some of the target villages. We then sell the cotton to private companies which give a premium above the market price and they accept raw cotton,” he informed.

Lars Bech, founder of Neutral, described the cooperative as their direct link with the cotton farmers. “We have been in the garment sector for 30 years and for the past 14 years have produced only sustainable organic cotton products,” he said. As an incentive, Neutral is paying an additional ten percent directly to the farmers in the conversion period, to remove the financial obstacle and increase their motivation to grow organic. “This year, we purchased 53 tonnes of cotton fibre, from which we plan to produce 200,000 t-shirts. We also plan to visit the cotton farmers personally later this year,” he adds.

The Bagres received Rs 5,300 per quintal for their cotton through COFE, plus a premium of Rs 250 per quintal over the market price at the time. Both, Kirtiraj and Vishakha, are shareholders in the cooperative and Vishaka was elected as a board member in February this year. “Besides giving us a better price for our yields and seeds for sowing, COFE is opening our eyes to new opportunities,” says an enthusiastic Vishaka. “We are learning about new crops to grow alongside the cotton saplings. I have nine acres of farmland and want to expand our area of organic farming. We plan to grow corn alongside cotton in the coming season.”