Updated : October 07, 2019 10:50 PM IST
In areas where human-elephant conflict is common, the forest department and affected farmers come up with multiple methods of mitigation, from electric fences to trenches.
In this commentary, Nicole Pinto, a researcher who works on Asian elephants, discusses fences and barriers from an animal behaviour perspective.
Pinto has documented her first experience of observing elephants in areas where human-elephant conflict is common.

I had joined the Frontier Elephant Programme a little over a month ago and this was the first time that I would be going to watch elephants. We were to accompany the forest guards as they patrol the forest boundary adjacent to a village in Tamil Nadu. I was not sure what to expect, but before the night was over, we spotted nine elephants.

Throughout the last month, I’d read much about the behaviour of these large mammals and heard so many stories from farmers, that I found myself trying to associate the behaviour of each elephant we saw with some information I’d already accumulated. 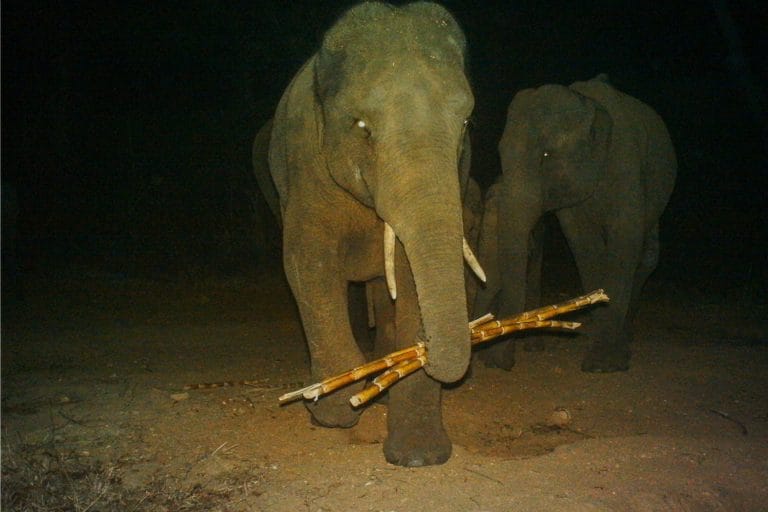 Elephants with sugarcane from a crop-field. Photo courtesy The Frontier Elephant Programme.

The first thing that I’d learned was that male and female elephants lead very different lives. Female elephants live in a herd, while male elephants, around the age of 12 to 15 years, slowly begin to wander away in search of their own home ranges. When they find a suitable area, they remain there, gravitating towards a more solitary life and only returning to a herd to mate.

The first elephant we saw that night was an adult male. He was about 10 feet tall, with beautiful long tusks that crossed near the end. We spotted him a little away from the road, hidden in a bamboo thicket. I was told that he was relatively new here, and to me, he seemed shy and timid.

When he noticed us, he immediately stopped eating and retreated a little bit into the bamboo. He eyed us suspiciously, but he made no further movements. After a few minutes, when he seemed to decide that we weren’t a threat, he continued eating, but his guard was still up. We must have been there for about five minutes, watching him silently eat. But it was clear that we were making him nervous, so we soon carried on. The stories that I’d heard from farmers that lived near the forest mostly centred around male elephants. Generally known to be higher risk-takers than females, the males had crossed over forest boundaries and navigated through villages to reach their farms at night.

The second elephant we saw was a sub-adult, who seemed on his way to a farm. He was a younger and smaller fellow. As he heard our jeep approaching, he tried to disappear behind a clump of trees. He did not seem as startled by our presence as the older bull — as if he was half expecting someone to come that way. An elephant tries to get across a wire fence. Photos courtesy The Frontier Elephant Programme.

This elephant reminded me of how I’d often jump the compound wall in school to buy ice-cream or other knick-knacks that the vendors sold just outside the school gate. We were all aware that sneaking out was only half the victory and those of us that could find new ways to sneak back in took all our friends along with us. Like us, I assume this sub-adult found the prospect of entering a farm filled with ripe mangoes well-worth the risk of climbing the fence.

To prevent elephants from crossing forest boundaries and entering crop-fields, the forest department and farmers around the Eastern Ghats of south India, have tried multiple methods from trenches to electric fences to keep them away. The elephants have always managed to find a way across. Given time, they learned that they were strong enough to push down most fences and that some trenches had patches of higher ground where they could cross. I’ve also heard stories of elephants that have pushed mud into trenches to level it enough for them to cross. 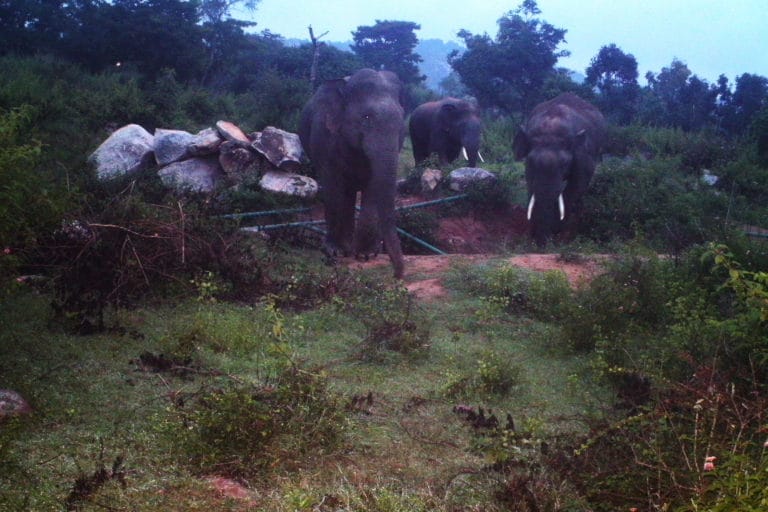 A group of elephants crossing a trench. Photo courtesy The Frontier Elephant Programme.

The last layer in this armoury of barricades has been the construction of an over 5 feet high wire fence supported by concrete pillars. In some places, this fence has been set up in addition to the electric fence.

The last elephants we saw were a group of seven bulls. When we spotted them, we immediately turned off the headlights and the engine and waited. The elephants retreated into the shadows, but they did not go very far. Being in a group, these elephants were bolder than the lone bull we saw a little while ago.

When the elephants had first started appearing in villages they had come alone and were timid. Hearing the voice of villagers or seeing bright lights were enough to scare them away. As older males slowly learned their way around villages, the sub-adults began seeking their company. And as we waited to see what these elephants would do, a few of the older bulls slowly made their way towards the fence. The oldest looking male went first, and being taller, he would align his body parallel to the fence. He would then lift his right fore and hind limbs over the fence onto the other side, so that he was now standing lengthwise with his belly touching the fence, and then he would do the same with his left limbs.

The younger, slightly shorter males, were the next to go. They would push the lower wires down and duck below the higher ones. From watching these elephants, it was clear that the younger ones were not merely copying the older bulls. Most of them had a slightly different way of crossing the fence.

The smallest elephant was the last in line. When it came to his turn to climb the fence, he approached it with uncertainty. The older bulls were all on their way to the farms, and he seemed unsure if he would be able to catch up with them. After a few undecided moments, he turned around and disappeared into the forest.

As I write this, three boys climbed the wall at our office to pluck some avocados from the tree that grows here. As I watched them from my desk, I noticed how excited and slightly nervous they were. One boy was halfway up the tree, one was on the wall, which has three lines of rusty barbed wire on the top, and the third one was on the ground. His main job seemed to be to spot anyone approaching and warn the others who had climbed up the tree.

As I thought about what would be able to keep them away — more barbed wire, a higher wall or a watchdog — I realised that they would keep trying different ways to reach the fruit. If they weren’t able to climb the wall any longer, they might try to hit the branch with a stick and collect all the fruit that fell.

So instead of trying to find a permanent solution to stop them, it may be worthwhile to keep a closer eye on the boys. To learn where they climbed the wall from and how they avoided the barbed wire. Once we understand their methods and strategies, we can then make occasional tweaks to the system.

Similarly, with elephants, while trying to deter them from leaving forests, are we taking into account all that we now know about their behaviour? For instance, long term associations among male elephants are becoming increasingly common. This enables younger males to copy the behaviour of older bulls, who are more accustomed to human-inhabited areas. Elephants also display a high degree of behavioural plasticity, or the ability to adapt their behaviour according to changes in their environment.

There is a need to incorporate these behavioural adaptations into our current conflict-mitigation strategies and to create dynamic solutions to prevent the further incursion of elephants into agricultural lands. These strategies may take a longer time to be accepted by farmers on a large scale, but hopefully, in the long-run, farmers will begin to see a decline in agricultural losses arising from elephants foraging on crops.