Updated : October 23, 2019 06:52 PM IST
An environment hotspot in south India, the Nilgiris district of Tamil Nadu is now witnessing consistent intense environmental disasters caused by climate change and complicated by human activities.
Avalanche river valley near Ooty received more than 900 mm of rain in one day during southwest monsoon this year and the region still faces continuous rains marking unexpected changes in the rain calendar.
The district administration has identified 50 vulnerable locations of Nilgiris based on the recent records of landslips and soil erosion, in addition to 233 vulnerable locations identified earlier by the Geological Survey of India (GSI).

A pristine valley located hardly 26 km away from the famous hill station Udhagamandalam (Ooty), Avalanche got its name from a massive landslide that took place here more than 150 years ago. Though the impact was heavy that time, this elegant little spot in the Nilgiri hills of Tamil Nadu had held nothing fearful for visitors since then and the region’s pristine forests and the lake with placid blue waters has provided a much needed welcome break from the routine tourist attractions of overcrowded Ooty.

Famous for meadows and winding paths surrounded by rhododendrons, magnificent magnolias and delicate orchids, Avalanche was a famous weekend getaway till the beginning of August when heavy downpours affected the entire Nilgiri Biosphere Reserve, which also includes Kodagu in Karnataka and Wayanad in Kerala.

For climate watchers, Avalanche is now the rain capital of southern India. The area received 911 mm of rain during a 24-hour period in the first week of August, the highest in southern India during southwest monsoon. Most areas of Avalanche and adjoining Emerald are still inaccessible due to continued floods and landslides. Tourism was hit badly and normal life turned out of gear.

According to farmer A. Muniyandi of Emerald, the southwest monsoon arrived very late in Nilgiris this time but left a lasting heavy impact in the last two months. For the entire Nilgiris, massive floods and heavy landslides were revisiting the district after a gap of ten years.

Loss of lives and property

“Known for heavy rainfalls, Nilgiris used to receive 900 mm rain over three months. This time we received the same amount of rain in three days. Flooding and landslides have killed six people and over 5400 families have been shifted to relief camps,” said S. Jayachandran, a resident of Ooty and secretary of the Tamil Nadu Green Movement.

This time, all the important towns in Nilgiris have recorded a minimum of 102 mm up to 820 mm of rainfall during southwest monsoon. Out of the 6 taluks in the district, 4 taluks namely Gudalur, Pandalur, Ooty, and Kundha have been severely affected by the incessant rains. Mostly the tribal people particularly from Irulas and Paniya tribes in Gudalur and Pandalur taluks and plantation workers, mostly the Tamil Repatriates from Sri Lanka, from the four taluks, are largely affected by the floods. 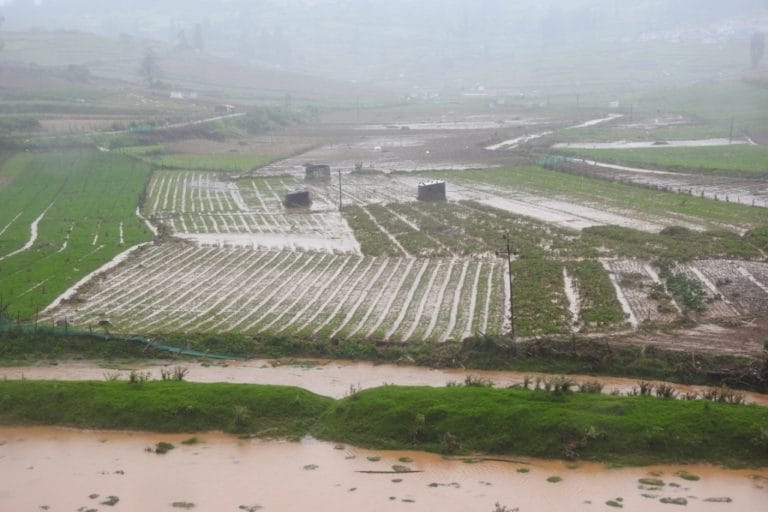 Flooded agricultural lands in the Nilgiris. Photo by Mathimaran.

As per data available with district administration, 62 hamlets in Ooty taluk, 89 hamlets in Kundha, 92 including 20 tribal hamlets in Gudalur, and 120 hamlets in Pandalur are still remaining severely affected by the floods which wreaked havoc this year. Revenue officials said more than 1,000 acres of farmland were destroyed in Ooty, Kundha, Gudalur and Pandalur taluks in the flash floods. Around 300 huts in tribal villages in Gudalur and Pandalur taluks were also destroyed. Officials said most of the adi dravidar tribal colonies in the four taluks were either partially or fully damaged in the flash flood and landslides, and more than 1,000 families had to be relocated.

According to V. Sivadass, managing trustee of Nilgiris Environment and Cultural Service Trust, the devastation occurred this time in Nilgiris was almost a replica and extension of what occurred in Kodagu (Karnataka) and Wayanad (Kerala), simultaneously. Large scale deforestation, encroachments, illegal buildings and other changes in land use patterns have turned into contributing factors in the climate change infused disaster, he said. A number of government buildings and establishments constructed in the Nilgiris in the recent past in a way disregarding totally the environmental concerns had also contributed to the disaster this time, he added.

“It was only recently that the district administration had taken the decision to fill a wetland close to the city bus stand in Ooty to construct a parking lot for tourist vehicles. We have raised a very serious objection to it. Reclamation of another wetland located close to the backyard of the railway station is now almost completely under the initiative of the army. They are building a huge structure there. In the heavy rains which occurred in August-September, the ground floor of the district education office was inundated. The reason was that it was built on a wetland,” points out Sivadass.

Environmentalists of Nilgiris are of the view that the climate disaster that spread havoc in region was predicted originally by the Madhav Gadgil Committee for Ecological Restoration of Western Ghats, years ago. They are demanding early implementation of the committee recommendations, especially those which are specific to Nilgiris, to lessen the impact of future occurrences. Strict action against illegal constructions is another demand.

“The overemphasis on tourism has killed the Nilgiri hills. Road widening and infrastructure development are priorities of the state government in Nilgiris. As far as the district is concerned, water conservation initiatives must be initiated without any further delay. Nilgiris is the source of potable drinking water for the entire Western Tamil Nadu comprising nine districts,” said environmentalist K. Mohanraj.

According to him, the priority must also be given to safe protection and maintenance of remaining swamp areas as they have huge water-holding capacity. However, large tracts of swamp areas are now being used for unscientific vegetable cultivation that invites massive soil erosion resulting in landslides, he said. 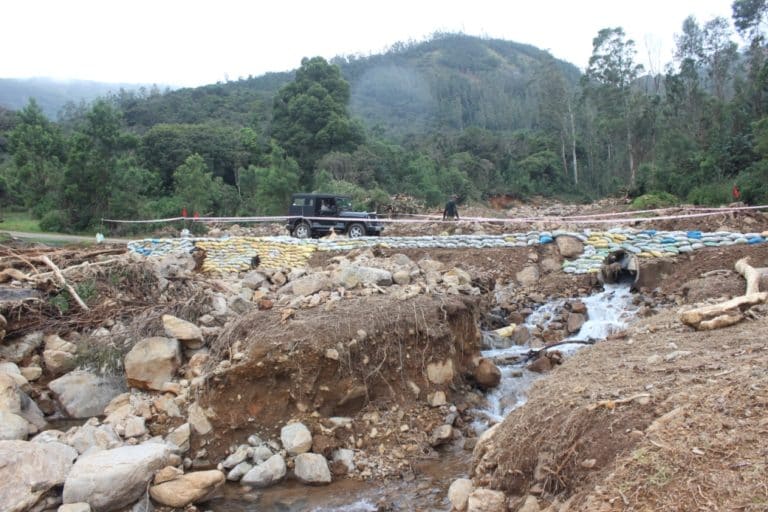 The present condition of the Ooty to Kundha road at Avalanche. Photo by Mathimaran.

The government’s move to construct a third connecting road between Coimbatore and Ooty via Karamadai, Velliyangadu, Geddai, Mulli and Kundha by destroying pristine forest lands is also facing resistance from environmentalists who fear that the road project also would contribute significantly to future landslides. The road alignment is through forest areas frequented in large numbers by wild animals such as elephants, leopards and sloth bears, say environmentalists.

According to Sivadass, vegetable farming in Nilgiris has changed drastically from the old prevailing nature-friendly practice. “Farms are expected to follow contour bunding which places stones along the natural rises of a landscape. Growing grass around the cultivated land would be ideal as it also would prevent soil erosion. Due to rampant non-traditional farming, soil erosion has become frequent now in the hills and this soil enters major dams reducing their total storage capacity,” he said.

According to Mohanraj, the preference for exotic trees like pine, wattle and eucalyptus in the plantations of the district has also played a major role in the devastation. They were planted at the expense of native vegetation and local biodiversity. As a result, the soil has lost its water-holding capacity and that had contributed to flooding. Large scale destruction of grasslands and shola forests that hold water to release slowly also had made the situation complex.

“Ooty is losing its cool climate over the years. Temperature is turning warmer and it has been rising tremendously since the 1990s. Studies point out that change in weather conditions will lead to intensifying of rainfall and drought,” points out S. Manivannan, principal scientist of ICAR-Indian Institute of Soil and Water Conservation (Research Centre). According to him, the natural water-draining network of the district has been badly affected. “The entire district is on shaky ground. Unmonitored constructions and cultivation on the higher slopes of the mountains are making it more vulnerable to future disasters,’’ he said.

In recent days, the district administration has identified 50 vulnerable locations of Nilgiris based on the record of landslips and soil erosion that occurred recently. These are in addition to 233 vulnerable locations identified earlier based on a study by the Geological Survey of India (GSI). The GSI had estimated that nearly 70 percent of the original forest land in Nilgiris had been denuded because of the cultivation of vegetables, tea and other plantation crops in a way causing irreparable damage to the environment. Ten percent was denuded for residential purposes. But no law was brought in to check the damage and stop constructions on the higher slopes.

Meanwhile, the non-governmental organisation Nilgiri Documentation Centre (NDC) has urged the state government to prepare a revised and comprehensive master plan to stop the alarming nature of violations of land use in the district in recent times. According to Venugopal Dharmalingam, honorary director of NDC, the devastation this time warrants an urgent revision of master plan for the Nilgiris to cover the whole of the fragile mountain district.

District Collector Innocent Divya told Mongabay-India that the district administration had sent a letter to the state government seeking to engage experts in preparing a detailed project report (DPR) on places prone to landslides. Once the DPR is ready, she said restrictions on construction work will come into force. 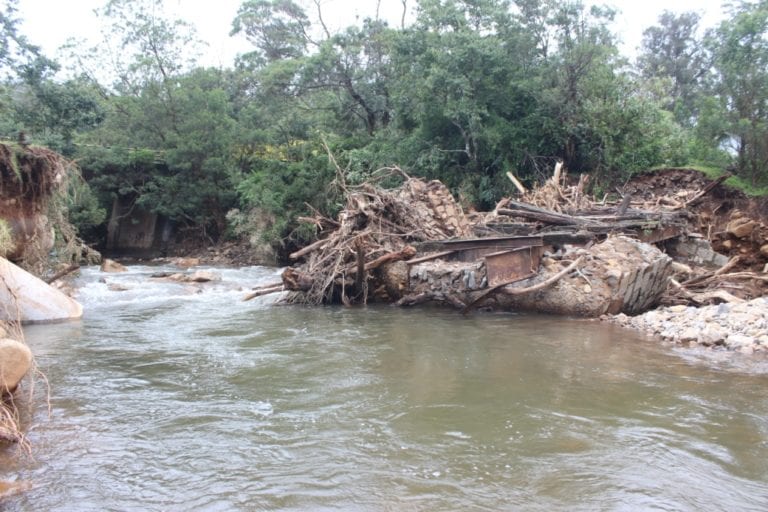