Updated : August 22, 2019 04:47 PM IST
About 15 percent of India’s population depends on spring water from mountains. But over one-third of these springs are drying up, endangering water security of the people dependent on the springs.
The newly formed Jal Shakti ministry has now come out with a framework document which highlights the urgent need to revive springs and calls for focused spring rejuvenation programmes.
The document suggests steps like mapping of springs, identification of recharge areas and sites for construction of appropriate recharge structures.

It is estimated that about nearly 200 million Indians, about 15 percent of the country’s population, depend upon spring water from the Himalayas, Western Ghats, Eastern Ghats, Aravallis and other such mountain ranges for domestic and livelihood needs. These spring water sources, however, are facing the threat of drying up. To address that, the Union Ministry of Jal Shakti Ministry has recently released a framework document that sets out a policy pathway to rejuvenate springs.

The framework document notes that there is an urgent need to revive/regenerate springs – the source for drinking water, sanitation and irrigation among the Himalayan population – and to ensure sustainable and equitable uses of the augmented groundwater resources in these mountainous regions.

“Spring discharge is reported to be declining due to degradation and erratic trends in precipitation,” the document observed stressing an urgent need to restore, revive and sustain springs. “Lack of knowledge, understanding and awareness on springs has further compounded the problem while also inducing elements of conflicts and haphazard development. Land-use changes, rapid urban expansion and growing commercial consumption are affecting forests and impacting spring water availability,” it noted..

A “pilot project has been proposed for spring inventory and rejuvenation in Tehri Garhwal district of Uttarakhand,” as per the framework document, with the Union Ministry of Jal Shakti as the nodal agency for spring rejuvenation.

“Some aspects of spring rejuvenation is addressing erosion and deforestation. The problem is the lack of a holistic approach. When the government talks about spring rejuvenation we can’t only look at small interventions for a particular spring but we need to look at overall catchment areas and developmental activities like hydropower projects. Only talking about water without looking at other interlinkages is going to be pointless,” Asher of Himdhara Collective, an environmental research and action group, told Mongabay-India.

“Communities and inhabitants of catchments need to have a stake, ownership in any such process of planning and management,” she said.

Several states and non-governmental organisations are already pursuing some kind of spring revival programmes. For instance, in an initiative by the Sikkim government, drought-prone rain-shadow areas of the South District and the West District of the state was targeted for preserving springs. The effort resulted in recharging of 1,035 million litres of groundwater annually covering 637 hectares and revival of 60 springs and four lakes in 20 drought-prone gram panchayats. Meghalaya has also started work to map 60,000 springs and create a plan for spring water management for about 5,000 springs in 11 districts over the next four years. Other states where such programmes are ongoing include Uttarakhand, Himachal Pradesh, Nagaland, Arunachal Pradesh, Meghalaya, Jammu and Kashmir and some hilly areas parts of West Bengal.

Water from the Himalayan rivers is not readily available to the densely populated villages and towns in the mid-hills of the Himalayas as the fast-flowing rivers cut deep gorges and flow several hundred metres below while the glaciers are far above. The communities then depend on rain-fed springs and streams for their water requirements, the document explained, adding that with “changing climatic conditions and rainfall pattern, a large number of villages, hamlets and settlements” are staring at a potential of severe drinking water shortage. 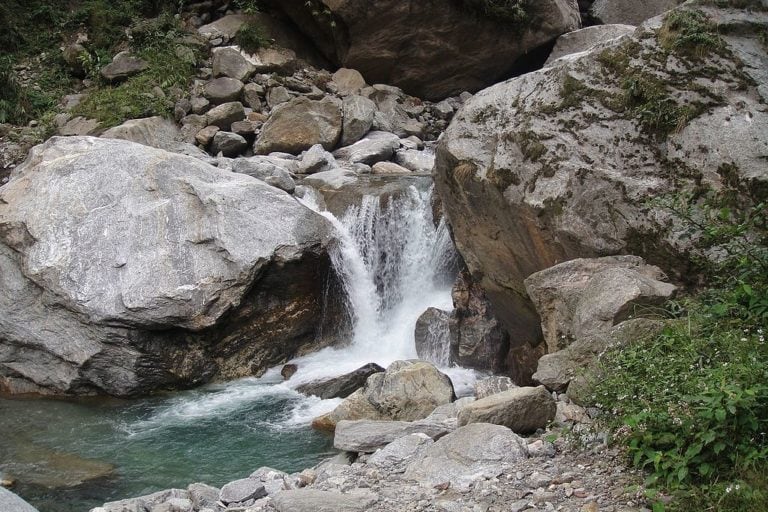 About 15 percent of India’s population depends on water from springs. Photo by Soham Das/Wikimedia Commons.

Over the past couple of years, water security has steadily garnered a lot of attention. This move by the government is in line with promises made by Prime Minister Narendra Modi during the campaign for India’s 2019 parliamentary elections where he had assured that his government would focus on access to safe drinking water.

After his party won the elections and came back into power in May 2019, all departments related to water issues were merged to form the ‘Jal Shakti’ ministry for a focused approach on water issues ranging from providing clean drinking water, international and inter-state water disputes, to the clean Ganga project.

During his June 2019 radio address, ‘Mann ki Baat’, Modi had urged people to start a mass movement for water conservation.

In 2018, Indian government’s think tank Niti Aayog came out with a report, ‘Inventory and revival of springs in the Himalayas for water security’ which held that about 30 percent of springs crucial to water security of people in the Indian Himalayan Region (IHR) are drying and 50 percent have reported reduced discharge. The Niti Aayog report had highlighted that 60 percent of the population in the IHR depend upon spring water and recommended a systematic mapping and revival of springs across the Himalayas.

Springs are crucial for the rivers

The water ministry’s document noted that while glaciers are considered to be the source of the mighty Himalayan rivers, most of them are fed by springs, even during the dry season and said that, “Any significant depletion in such springs flows at river origins will surely impact the flow of rivers.”

It is also estimated that springs and underground seepages provide about 90 percent of the hilly states’ domestic water needs besides being used for irrigation, livestock and cultural purposes.

The government expects that focused programmes across the country would lead to regeneration of springs leading to adequate quantity and quality of water for drinking and irrigation purposes, help in maintaining environmental flow in mountain rivers and empower communities to manage their water resources. Springs are crucial for the survival of rivers in the Himalayan region. Photo by Gayatri Priyadarshini/Wikimedia Commons.

The framework document noted several challenges in spring rejuvenation programmes. While noting that community participation is key for long term sustainability of the programmes, it said that only supply-side interventions may increase the water discharge for short term but may not solve the water security issues in the long term. It also noted that the convergence of various government schemes, efforts and funds remain a challenge.

“The knowledge remains in the hands of experts and is not adequately transferred to the local community making the community dependent on the government experts,” it added.

Further discussing the required roadmap, the document emphasised that the task of revival of Himalayan springs can be achieved through a systematically coordinated national, state and local level initiatives involving all possible stakeholders and partners including governments, community and people at large.

It called for augmenting the efficiency of water use by involving the communities and sensitising them about resource protection, preventing contamination of the aquifer that supplies water to springs and land use management and control.

The document also suggested steps like comprehensive mapping of springs, setting up of data monitoring system, understanding socio-economic and governance systems of springs, hydrological mapping, creating a conceptual hydrogeological layout of the springshed, classification of spring type, identifying mountain aquifer and demarcating recharge area, developing springshed management and protecting the catchment of the spring and the spring head from pollution.