Birds and me go a long way back. We started off on an emotional note that needed no common language to communicate - the emotion of compassion. There is nothing more heart - wrenching than seeing an avian glory lying on the ground with outstretched, injured wings.

I could see the silent plea for help in its soulful eyes. And in that moment, we formed a bond, a bond that would lead me to my fascinated explorations and experimentations of these beautiful winged creatures. An affair started between my lens and birds - in the wild, on the streets, amidst Nature, amidst concrete.

My vision for this series as a photographer was to blur the growing line of dissent between these winged beauties and the metropolis. Likewise, I decided to mix street and bird photography, pre visualizing a frame space shared by both. And the rest was a matter of imagination and long spells of patience.

Catapults and birds have a hostile history. One 's presence disturbs the other. As a child, I would feel sick seeing people use catapult to hurt and hunt birds. However, a few months ago, while noticing the graffiti of a child playing with a catapult in one of the artsy corners of Shahpur Jat, a question struck my mind. What if a bird is able to soar freely, without fear in front of a catapult? What if the sling device can no longer restrict its flight to freedom? And this feisty crow decided to give me the answer from this artistically liberated corner of Delhi. And what an answer it was! Birds are exotic because they are beautiful creatures of the wild. Flocked together, they preen, fly play and spend their lives together away from the prying eyes of human civilization. On a cold January morning of the year 2016, I ventured to the vicinity of Wadhwana Lake for birding where I noticed a bird perched atop one of the bare branches of a naked tree. Naked trees have always fascinated and perturbed me at the same time. There is something unsettling about the perceived strength of the vice - like grip of their branches. In my imagination, the bird seemed trapped in the thorny limbs of the derelict tree. I hoped it would release itself and fly away to its awaiting  flock. And then came my moment. As it slowly soared and whirred its wings in its flight to freedom, so did whir the shutter of my camera. The bird lover's eye in me identifies shapes of birds in any contour it lays its vision upon. Once, while visiting a friend's exhibition at the India Habitat Centre, I chanced upon looking up at an intricate pattern shading the open area from the vast sky. I was amazed to notice how much the pattern resembled the flight of a flock of birds. My next big task was actually to find the ring leader. But after some sharp observation and acute concentration, I was rewarded with this amazing picture. On a lazy Sunday afternoon, sitting in the balcony of my Mehrauli flat, I was ruminating on the drab nothingness of city life when my reverie was broken by a cooing sound coming from behind the vent of the window air conditioner. I noticed my shy companion, a pigeon, checking out the sky for its impending flight. I was just hoping it would spread its wings against the pale afternoon sky and fly.

Luckily, it seemed to agree with my thought and after some stealth maneuvering and furtive clicks, I got my afternoon dream etched on the frame. 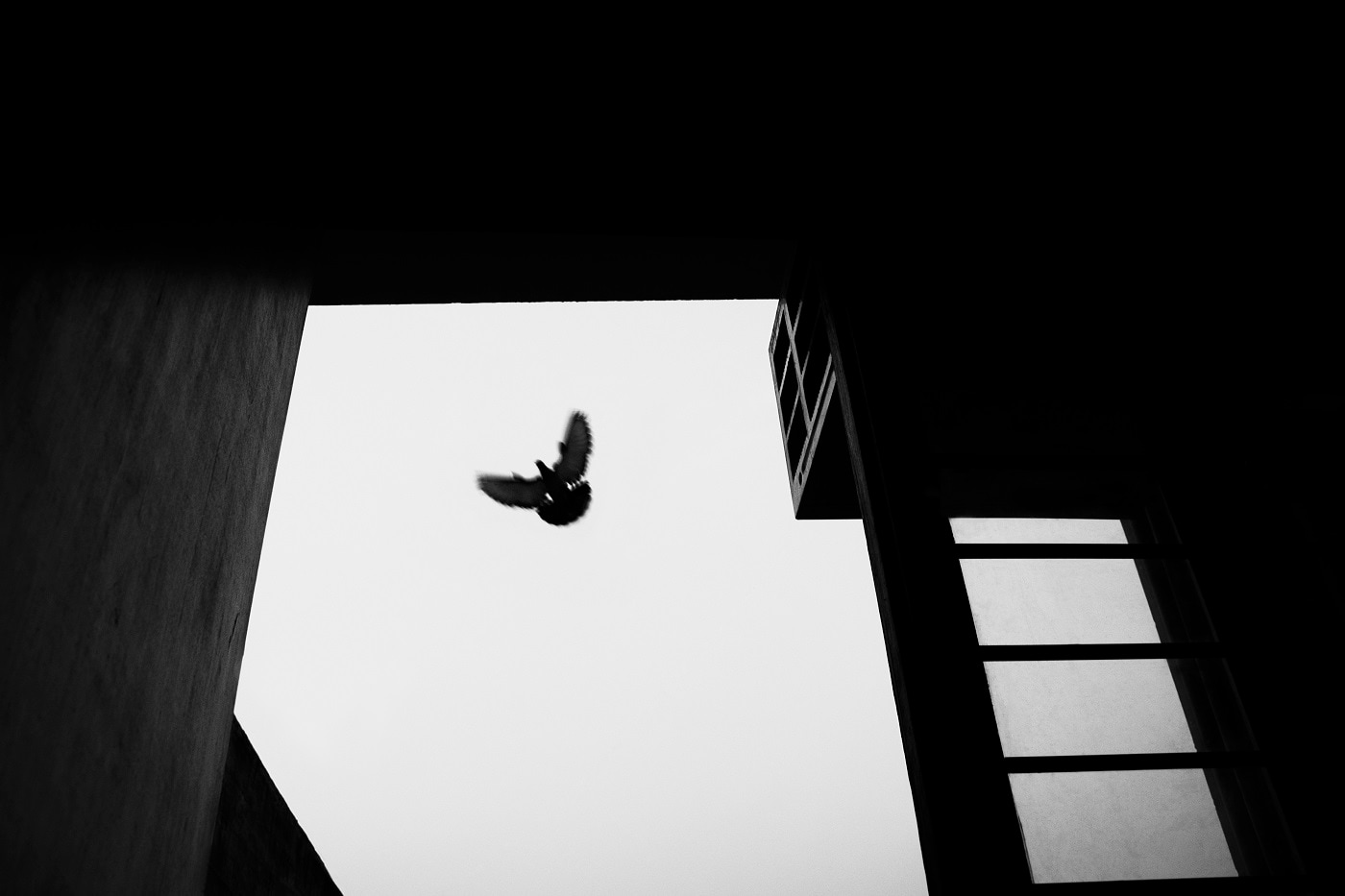 A wintry morning at the Bharatpur Bird Sanctuary held more promises to me than Noah's Ark. The mystical unveiling of the sun rays through the fog illuminated the serene ponds and green tunnels with a divine radiance. Animals and birds relaxed and trotted in peace, unperturbed by the worries of the human world. And in one such ethereal moment, I noticed this little Cormorant reveling and basking in nature's bounty. Its gentle movements broke the silence of the woods and the the monotony of my soul. 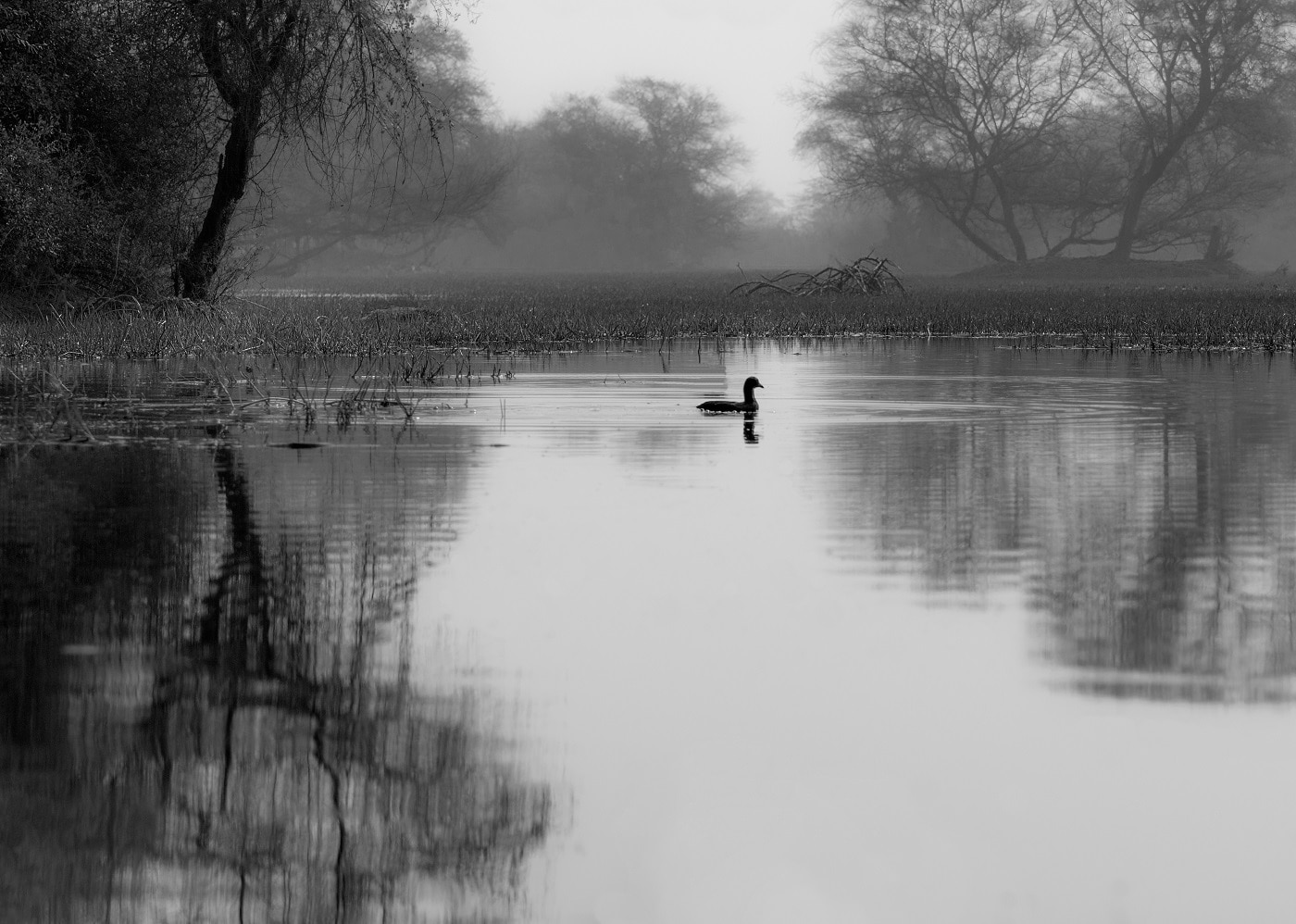 An artist always loves a creative challenge. This breathtaking statue of the floating lady in the Garden of Five Senses around Mehrauli heritage area stimulated my grey matter to add essence to her persona. And I knew the perfect contender for her attention. I could actually visualize another delicate creature being released to freedom through the dainty fingers of this cherubic creation. However, my greatest hurdle was in luring a bird to the otherwise avian desolation. I struggled for two days, until this bird graced me with its presence. The rest, the picture would speak.