Updated : August 29, 2019 03:04 PM IST
The year-long trade war between the US and China has already spread beyond tit-for-tat tariffs on goods to other areas and geographies.
The latest developments on the US-China trade dispute and other protectionist policies present both a challenge and opportunity for India.

With US President Donald Trump announcing plans to impose more tariffs on imports of Chinese goods and labelling Bejing a currency manipulator earlier this month, the trade dispute between the world's two largest economies is showing no sign of relief. The year-long trade war between the US and China has already spread beyond tit-for-tat tariffs on goods to other areas and geographies. After China, Trump started tariff wars with Mexico, Canada and the European Union.

Trump has also trained his guns on India as well, beginning with removing New Delhi from the Generalized System of Preferences (GSP) programme. India also imposed retaliatory tariffs on US goods. Besides, agricultural commodities, e-commerce and the data localisation policy were among the areas of disagreement between the two countries.

Chief economic adviser Krishnamurthy Subramanian recently said that the US-China trade war does not impact India’s exports, which is around 2 percent of the global exports. DBS Bank rejects the narrative. The latest developments on the US-China trade dispute and other protectionist policies present both a challenge and opportunity for India, said DBS Bank economist Radhika Rao in a research note. The August 28 report pointed out five key factors about how the US-China trade war impacts India. Even as India’s goods exports account for a modest 20 percent of GDP compared to higher weightage amongst peers, most phases of strong growth in India has coincided with its exports also rising by double digits.

For India, ongoing conflicts and a domestic turn towards protectionist policies could hasten the pace of imports substitution, raising costs and introducing inefficiencies.

2) The fallout from US-China trade conflicts

India’s direct exposure to the US (16 percent) and China (5 percent) is modest compared to its regional peers and account for a fifth of total merchandise exports, according to DBS Bank.  Between the two, India is more exposed to the US, even as their bilateral trade surplus has been narrowing in recent years. Despite this, India’s overall trade balance is in deficit, led by a sizeable gap with China. 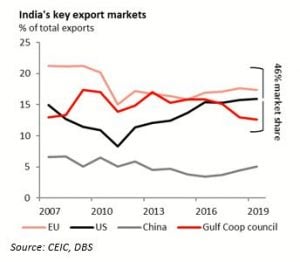 Exports of iron and steel to the US—around 3 percent of India's exports to the US—slowed down by a third, partly because of the tariff impact and bilateral anti-dumping cases, said DBS Bak.

Among the benefits, India could increase its trade footprint, particularly under categories on which the US has imposed tariffs on China. Apart from trade, diversion in investment flows is an opportunity that India could benefit from, as manufacturers seek alternative origination destinations, noted the report.

Meanwhile, India's retaliatory tariffs on 28 products imported from the US are expected to fetch $217 million in revenues, DBS Bank said, citing media reports. In response, the US has taken India to WTO and tightened visa regulations and higher income thresholds, impacting Indian software and information technology services.

Data from the Global Trade Alert database highlights India as amongst the top few countries with the highest number of restrictive trade practices, even after adjusting for liberalizing measures, noted the DBS Bank report.

India imposed more tariffs on imported goods in the last two years. Additional policies to support affected sectors have also been extended, by way of subsidies to agriculture and support to state-owned enterprises additional policy actions. On the policy front, India has been hesitant to join multilateral trade agreements.

"While these protectionist measures are understandable, it might also benefit India to lower some of its barriers at a time when the global players seek alternative trade and investment destinations across the region," siad Rao in the report.

5) Impact of Chinese yuan on the Indian rupee

The Indian rupee has declined over 4 percent against the US dollar in Q3 under pressure from broad US dollar gains. A sharp rally in the yuan against the dollar last month also send the rupee below the 72 mark.

DBS Bank’s empirical study on a linkage between the CNY and INR found that the relationship between the two currencies began to tighten since 2015, particularly since the yuan’s one-off devaluation. Since then, correlation has risen to 0.33.

According to the study, the US dollar dominates INR’s direction, and ties with the EUR are weak, while slightly negative with the JPY.

“As a counter to tough global conditions, domestic policies will have to constructive to revive demand,” said Rao, approving the recent measures announced by the government. She termed the RBI’s policy action on banks as timely.