Finance minister Nirmala Sitharaman said the government proposed to cut corporate tax rates to 22 percent for domestic companies provided they will not avail exemptions or incentives and 15 percent for new domestic manufacturing enterprises as part of a raft of measures to boost economic growth.
Companies not availing exemption will not be required to pay minimum alternative tax (MAT)," Sitharaman told reporters in Goa ahead of a meet on goods and services tax (GST).
Growth fell to a six-year low of 5 percent in the April-June quarter.
She said, "In order to attract fresh manufacturing and boost to make in India, any new domestic company incorporated on or after October 1, 2019 and commences product on or before March 31, 2023, will have an option to pay income tax at 15 percent. For companies who do not avail any exemption effective tax rate shall be 17.01 percent. Such companies will not be made to pay any MAT."
She said, "If companies want to opt for the existing regime, they can continue with their current tax holiday, once the tax holiday expires, they can opt to the new regime announced today.""If they once opt for new regime, companies can't go back to the old regime," Sitharaman said.
She said, "Companies enjoying tax holidays will be able to avail concessional rates after exemption period gets over."
Markets cheered the move as Sensex and Nifty surged 4 percent in a biggest one-day gains in 10 years soon after FM Sitharaman's announcement. 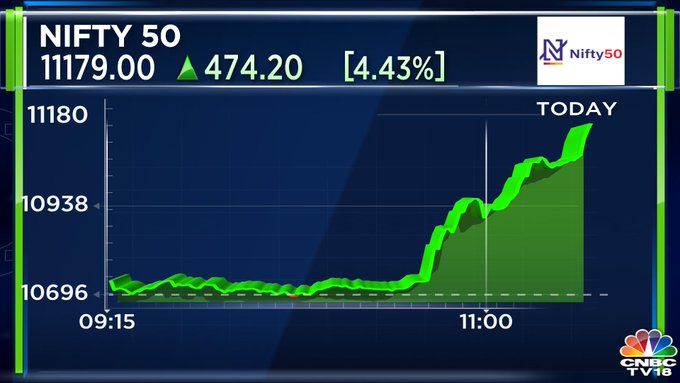 Nifty sees biggest-ever gain in 10-yearsSitharaman said, "The enhanced surcharge will not apply on capital gains is securities transaction tax (STT) is payable."
She said, "The total revenue foregone due to the relief provided stands at Rs 1.45 lakh crore per year."
FMCG to Benefit?
The measures announced by the finance minister will be positive for fast moving consumer goods (FMCG) companies like GSK Consumer, Nestle, ITC and Hindustan Unilever as their current corporate tax rates stand at 35 percent, 34 percent, 32 percent and 29 percent, respectively.
There will not be any change in corporate tax rate for companies like Godgrej Consumer, Dabur and Emami and they currently pay between 19 percent and 22 percent.
Buyback
Sitharaman also said companies who announced buyback before July 15 will be exempt from buyback tax.
IT companies like Wipro and Infosys are set to benefit from this move as the two had announced their buyback plans before the Union Budget 2019. For Wipro, the buyback tax (20 percent on Rs 10,500 crore of buyback announcement) came at Rs 2,100 crore, while for Infosys, the buyback tax stood at Rs 1,652 crore on its Rs 8,260 crore share buyback plan.
"A company, which does not opt for the concessional tax regime and avails the tax exemption or the incentives, shall continue to pay tax at the pre-amended rate. However, these companies can opt for the concessional tax regime after expiry of their tax holiday or exemption period. So if they are already enjoying some exemptions and also some tax holidays and if they would want to continue with that, they have a choice to do so. That is if they want to continue the existing exemptions," she said.
FPIs
Sitharaman said, "The enhanced surcharge shall also not apply to capital gains arising on sale of any security including derivatives in the hands of foreign portfolio investors (FPIs)."
Early Diwali for India Inc
Market expert Samir Arora, in a tweet, said, "This is not bigger than budget, this is bigger than last 20 budgets."
Manish Chokhani, director, Enam Holdings said, "Well done Nirmala Sitharaman. This is how a new economic cycle gets kick started. Bring back profits and animal spirits get ignited. Historic move! Now to India Inc to show it’s response and consumers and workers to benefit!"
Responding to the corporate tax cut, S Subramaniam CFO, Titan Industries said, "This is a fantastic news. 29 percent is the effective tax rate today so we got a 4 percent savings straight away. That straight away goes to earnings but one of the things all companies may have to look at is to boost demand. You may want to also look at passing on some of that benefit to the consumer. So it is a great thing. This really gives us that leverage."
Pawan Goenka, managing director, Mahindra & Mahindra (M&M) said, "Looks like Diwali has come early."
Keki Mistry, vice chairman and CEO, HDFC said, "I think it is a huge positive. It is the kind of fillip that the industry required. This will facilitate more investments into the economy and I think the two important things which we needed was more investments and higher consumption."
Uday Kotak, managing director, Kotak Mahindra Bank, in a tweet, said, "Reducing corporate tax rate to 25 percent is big bang reform. Allows Indian companies to compete with lower tax jurisdictions like the US. It signals that our government is committed to economic growth and supports legitimate tax abiding companies. A bold, progressive step forward."
Check out our in-depth Market Coverage, Business News & get real-time Stock Market Updates on CNBC-TV18. Also, Watch our channels CNBC-TV18, CNBC Awaaz and CNBC Bajar Live on-the-go!
Tags