Updated : April 24, 2019 05:45 PM IST
A study shows how approaches using crowdsourced citizen science – in which farmers themselves are involved in the scientific studies – improve and accelerate crop variety recommendations.
In India, Nicaragua and Ethiopia, farmers participated in a crowdsourced citizen science approach called tricot in which each farmer plants seeds of three crop varieties randomly assigned to them from a broader set of varieties.
This simple format (tricot) addresses the challenge of variety replacement for climate adaptation in a way that is scalable and demand-led at the same time.

Farmers in three countries, including in India, have turned into citizen scientists, helping generate data on crop varieties that adapt best to potential climatic changes.

In a study spanning India, Nicaragua and Ethiopia, researchers have demonstrated how farmers’ involvement in scientific studies can improve and accelerate crop variety recommendations.

Scientists applied a nifty crowdsourced citizen science approach called tricot – triadic comparisons of technologies- in which each farmer plants seeds of three crop varieties randomly assigned to them from a broader set of varieties.

The farmer then ranks the varieties according to different characteristics such as early vigour, yield, and grain quality.

There are several advantages in getting farmers to participate in data gathering, according to Jacob van Etten, senior scientist at Bioversity International and lead author of the paper.

“Farmers are the final users of the seeds, so they know best what works for them under local conditions. They test in the environment to which the varieties should be adapted. Also, by doing this on their own farm, they are able to see the full crop cycle from seed to final product,” van Etten told Mongabay-India.

“In other formats for on-farm experimentation, farmers only get snapshots of the crop. Another aspect is that farmers contribute with their land and effort, reducing the costs of the trials. Seeds are generally provided for free, but other formats of experimentation often require renting land,” he explained.

The researchers spread out the tricot trials over different seasons and landscapes to obtain a unique dataset covering 842 plots of common bean (Phaseolus vulgaris) in Nicaragua, 1,090 plots of durum wheat (Triticum turgidum ssp. durum) in Ethiopia and 10,477 plots of bread wheat (Triticum aestivum) in India.

The rank-based feedback format allowed even those with low literacy skills to contribute their evaluation data through various channels, including mobile telephones. Scientists then linked the farmer-generated data with agroclimatic and soil data.

“We combined the data from farmers with data on the seasonal climate of each plot. Farmers told us when they planted, and we had GPS coordinates of their farms. This allowed us to link the relevant weather data that occurred during the trial on each plot. We then used statistical analysis to see how the seasonal climate influenced how well the varieties did on each farm,” van Etten explained.

Seasonal climate data was sourced from weather stations and satellites.

It was a lot of fun to visit the plots and talk with the farmers. Each plot had its own little story: wheat growing in an orchard or next to a cooperative and women’s groups getting involved, the researcher recalled in a blog post.

As the plots are smaller (with only three varieties from 120 grams of seed), they are easier to accommodate.

Discussing the significance of the study, Ambica Paliwal of Bioversity International, India, emphasised that in vulnerable, low-income areas, climatic analysis of variety performance is possible with trial data generated directly by farmer citizen scientists on farms.

The unique contribution of the tricot approach is that it integrates aspects of approaches such as multilocation trials, participatory variety selection, variety dissemination and others into a simple trial format.

This simple format addresses the challenge of variety replacement for climate adaptation in a way that is, at the same time, scalable and demand led.

Tricot trials can track climate trends as they manifest themselves on farms, adjust variety recommendations and recommendation domains, and contribute to understanding how climate affects on-farm varietal performance.

These are farmers evaluating traits of durum wheat varieties in Ethiopia. Photo by Samantha Collins/Bioversity International.

For bread wheat in India, diurnal temperature range (DTR) during the vegetative period, determined which varieties do better and which worst under certain seasonal climate conditions.

Varietal performance patterns changed with the DTR, the difference between the minimum and maximum daily temperatures.

To assess what the tricot trial results mean in practice, results were weighed against existing recommendations. For India, findings were compared with the front-line demonstrations of the Indian Institute for Wheat and Barley Research (IIWBR).

A key insight was that certain older varieties such as K 9107 are still preferred by farmers, researchers said. “Also, we found that variety recommendations which were homogeneous for the Indo-Gangetic Plains, can benefit if they are more location-specific and based on climate analysis,” van Etten pointed out.

“A limitation is the use of the tricot method by government-funded institutions. The current approach is to use frontline demonstration plots. The results of the study suggest that the tricot approach could complement that approach, to allow for a more scientific analysis of the climate adaptation of varieties,” he stressed, adding this would require a change in the work routines of extension workers. Farmers have shown a lot of interest, the researchers observed. As end users, they were keen to carry out field trials and then adopting varieties as per their experiences, said Ambica Paliwal.

“They return data in almost all cases, and if they didn’t it was mostly due to external causes, such as the loss of the plot to drought. Variety adoption has been very high. We have measured yield increases of more than 30 percent. This is a very important achievement, that will be published soon,” added van Etten.

During the execution of the project, some challenges did come up. Seed arrived late in the first cycle, but farmers were ready to remove other crops or clear spaces to plant the trial seeds since little land is required. Another challenge was to get the women involved.

“In the first year, few women participated. For cultural reasons, crop variety evaluation is often seen as mainly of interest to men. We thought that their participation was important, however as women are often knowledgeable about different aspects than men, especially food preparation,” van Etten noted.

“We reached out to women self-help groups in different areas and this proved a good strategy. Many women were very enthusiastic to participate.”

A survey conducted in April 2017 in Bihar indicates that 83 percent of farmers in Samastipur, 95 percent in Chhapra and 95 percent in Vaishali districts want to grow the varieties evaluated in the participatory trials under Bioversity International’s ‘Seeds for Needs‘ initiative which works with farmers to research how crop diversity can help minimise the risks associated with climate change.

Before the intervention, the farmers usually used only two to three varieties, but now they know of more than ten varieties of rice and wheat, and their response to different climatic conditions.

For instance, Jagdish Singh of Mukundpur village in Bihar says he assesses all the varieties and then selects the better ones for use in the subsequent years.

Nirmala Devi, a farmer with a landholding of an acre in Bhatadasi in Bihar, pointed out that before the trials, she knew about only two to three varieties available in the local market. Currently, she grows five wheat varieties on her farm.

Jacob van Etten underscored the importance of collaborating with farmers: “I think that farmer collaboration is essential for selecting climate-resilient varieties. Without feedback from farmers, scientists may be promoting varieties that have low acceptance among farmers, even though they may be very tolerant of extreme weather.”

“Stress tolerance is only one aspect, and farmers look at the whole crop and its product to evaluate its value to them. On the other hand, farmers have the capacity to produce data that make good sense from the perspective of a crop scientist. The insights we obtained from their data matched other scientific findings well,” he told Mongabay-India. 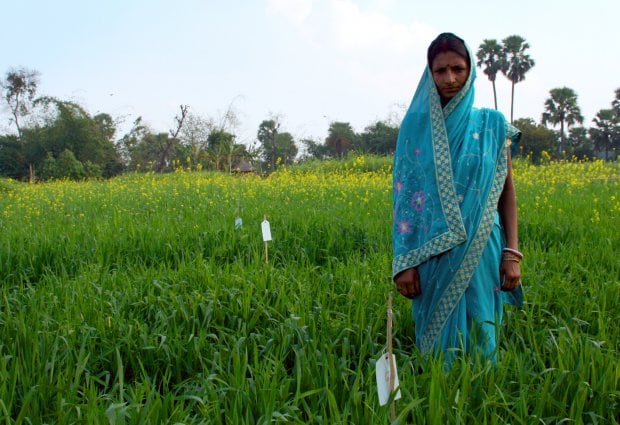