Updated : March 22, 2019 03:54 PM IST
Ahead of India’s 2019 parliamentary elections, farmers’ unions from across India have released an 18-point agenda for political parties to include in their manifestos with clear implementation timelines.
The poor state of agriculture sector was touted as one of the main reasons behind Bharatiya Janata Party’s loss in recently held assembly elections in Madhya Pradesh, Chhattisgarh and Rajasthan.
Rural distress and unemployment were the main influencing factors in the election campaigns before the narrative changed to nationalism, following the Pulwama attacks on Indian security personnel and India’s retaliatory air strikes. Farmers are hopeful that agricultural distress would still be an important issue in the elections.

The ruling party’s loss in the assembly elections in December 2018 in five Indian states, reminded parties of how dissatisfied farmers could derail all electoral calculations. Now, just before India’s 2019 parliamentary elections, farmers’ groups from across the country have come together to present an 18-point agenda outlining their problems and demand political parties to include it in their manifestos with a clear timeline for implementation.

India continues to be a predominantly agriculture-based economy with over sixty percent of the population dependent on agriculture and thus the community’s disenchantment with any party can be a serious cause of concern for it. Over 300 seats of the 543 seats in lower house of the parliament come from rural areas. The link between agriculture and elections was visible in the recent state elections where the agricultural crisis was touted as one of the main reasons for the ruling Bharatiya Janata Party’s loss in Madhya Pradesh, Chhattisgarh and Rajasthan.

Last week, the All India Coordination Committee of Farmers’ Movement comprising all the significant farmers unions in India such as the Bhartiya Kisan Union (BKU), Karnataka Rajya Raitha Sangha (KRRS), Tamilaga Vivasaiyagl Sangham (TVS), Adivasi Gothra Mahasabha (AGM) and a host of organisations from across India, released their 18-point agenda demanding all the political parties to include in their manifestos with clear timelines for implementation.

The unions have also met and had discussions with representatives of all the major political parties like Bharatiya Janata Party (BJP), Congress, Samajwadi Party (SP), Bahujan Samaj Party (BSP) and the left parties. The unions voiced their displeasure with the Prime Minister Narendra Modi-led National Democratic Alliance (NDA) government and called it a failure for not doing enough to address rural distress.

“We have given our agenda to representatives of all major political parties like BJP, Congress, BSP and SP and they have assured to include it in their manifestos. The farmers’ issues are still a top priority in the 2019 elections,” Rakesh Tikait, a farmer leader and national spokesperson of the BKU, told Mongabay-India. Tikait comes from the western region of Uttar Pradesh, an important state for BJP where, in the 2014 Lok Sabha elections, the party got over 70 of the total 80 seats in the state. However, in the past few years, rural distress has worsened, and farmers from all over, including U.P. have been agitating across the country seeking steps for their welfare.

The 2019 elections for Lok Sabha of India’s parliament are scheduled to take place in seven phases starting from April 11 and concluding on May 19 while the counting of votes would take place on May 23.

What are the demands of farmers?

Some of the main demands of the farmer groups include a special parliament session for a month to discuss the agrarian crisis, implementation of the ‘Right to Fair Compensation and Transparency in Land Acquisition, Rehabilitation and Resettlement Act, 2013’ in all states and making land acquisition a central subject rather than state subject.

They have sought a ‘fair and remunerative price’ for their farm produce and a guarantee from the government for 100 percent procurement of all crops.

Other major demands include an unconditional waiver of all types of loans of all farmers within six months of coming into power, exhaustive changes in prime minister’s crop insurance scheme like including losses caused by wild animals and fires, income support of Rs. 10,000 per acre per year per farmer to all farmers and pension of at least Rs. 5,000 per month, action plan to tackle crop destruction by wild animals, free electricity for irrigation via tube wells, that all equipment used in agriculture be made GST (Goods and Service Tax)-free, a social security scheme for farmers losing life to snake bites and other occupational hazards. 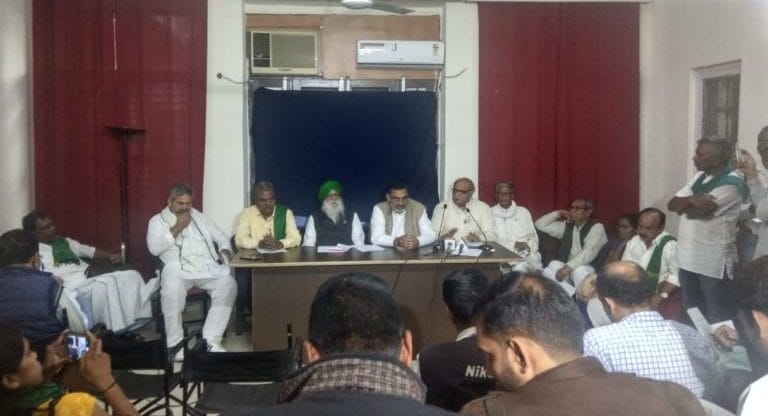 The farmer groups of India have come out with a detailed 18-point agenda in the run up to the general elections. Photo by Mayank Aggarwal/Mongabay.

They also lent their support to the campaign of tribal people and forest dwellers who are facing eviction from forests after February 2019 Supreme Court order (the Court stayed its order later). In past two years, farmers including tribal people have taken out several protests to ask government to listen to their demands.

Held few months before the 2019 Lok Sabha elections, the results of assembly elections in Chhattisgarh, Madhya Pradesh and Rajasthan in December 2018 came as a warning for the ruling BJP whose juggernaut came to a halt as it lost power in all the three states.

The government quickly read the writing on the wall and took action. As a result, the 2019 union budget was tailor made to appease farmers and the rural community. For instance, India’s then Finance Minister Piyush Goyal in the 2019-20 budget announced a minimum assured income for farmers.

“To provide an assured income support to the small and marginal farmers, our government is launching a historic programme Pradhan Mantri Kisan Samman Nidhi (PM-KISAN). Under this programme, vulnerable landholding farmer families, having cultivable land upto two hectares, will be provided direct income support at the rate of Rs. 6,000 per year. This income support will be transferred directly into the bank accounts of beneficiary farmers, in three equal installments of Rs. 2,000 each,” said Goyal in his budget speech.

Goyal added that the programme to be funded by the government of India would benefit around 120 million (12 crore) small and marginal farmer families and would involve an annual expenditure of Rs. 750 billion (Rs 75,000 crores).

But the announcement has failed to cut ice with farmers.

“Modiji has done nothing for farmers in the last five years and it has been business as usual. Only lofty announcements like ‘per drop more crop’, health-card, neem coated urea were made. The government also promised to double farmers’ income by 2022 but nothing was done on it. In five years, the income of neither farmers nor agricultural labourers has increased,” Vijay Jawandhiya of Maharashtra Shetkari Sangathan told Mongabay-India. Rural distress and unemployment were the main issues in the election discourse before the Pulwama attack in February 2019. Photo by Mayank Aggarwal/Mongabay.

“It was the loss in the assembly elections in December that forced the Modi government to announce the support of Rs. 6,000 for farmers. This too won’t benefit all the farmers,” said Jawandhiya.

Until last month, rural distress and unemployment had the centre stage in the run up to the 2019 elections. But following the Pulwama attack on Indian security personnel and the Indian government retaliation with air strikes, the election narrative has changed and nationalistic fervour is now in the limelight.

Nilanjan Mukhopadhyay, a political analyst, explained that the overall rural distress and farmers’ issues were playing a “very eminent part in the election discourse till February 14, 2019 before the Pulwama terror strike and Indian government’s subsequent air strike in reaction, took place.”

“That event somewhat changed the picture. We have to see whether the present wave of nationalist fervour sustains till the voting. We are eight weeks away from the conclusion of polling and it is a fairly long period. The first phase is also about 20 days away (April 11, 2019). We don’t know for how long the nationalistic fervour would continue. But, if things remain the same – which I doubt – as they are now, then rural distress and the declining non-agricultural rural incomes are not going to come back in a significant way in the election narrative,” Mukhopadhyay told Mongabay-India.

He stressed that while public sentiment surveys that came post-Pulwama attack have shown the rise of nationalistic fervour and resurgence of BJP, they still do not indicate that the BJP-led NDA government, currently at the centre, will get full majority.

In the 543-member Lok Sabha of India’s parliament, one party or a coalition of parties requires 272 seats to stake claim to form government. In the 2014 elections, the BJP alone had won 282 seats.

“So, the argument is that even if at the peak level – immediately after the Balakot airstrike (in February 2019 end)– all that BJP would get is 200-220 seats. In case BJP is not being able to sustain the nationalistic narrative, they may again slip back to 180 seats and then rural distress would make a comeback,” Mukhopadhyay added. 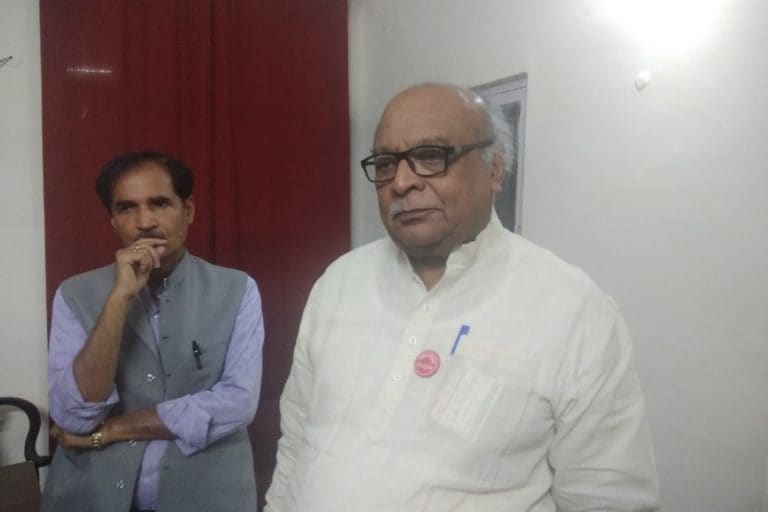 Experts are hopeful that farmers’ problems could still play an important role in the upcoming elections. Photo by Mayank Aggarwal/Mongabay.

However, Maharashtra’s Vijay Jawandhiya feels that the changing narrative will push back the issues that he and his farmer community have been trying to bring into focus. .

“The effort to bring emotions (nationalism) in the elections will lead to all other issues going under the carpet. The farmers will continue to die,” Jawandhiya said.