Family plants over 6000 trees in Mumbai and inspires communities

Updated : August 15, 2019 07:36 PM IST
The Athalye family is continuing a tradition that spans two decades and three generations: of planting native trees and shrubs to make densely populated suburban Mumbai greener and healthier.
The family has planted around 6000 saplings and also setup a butterfly park in Aarey.
Their actions inspire many and could contribute to building up the coastal city’s green spaces and climate resilience.

The high noon sun makes it tough to inspect the shrubs and plants in the butterfly park without squinting. Despite the harsh conditions, the Athalye family – Sandeep, his wife, son, and mother – arrived at the two-acre park for their regular visit, not just to have a leisurely time, but to survey the thriving Eden they helped establish inside Mumbai’s green lung: the roughly 3000-acre Aarey Milk Colony.

The Athalye family’s weekend trip to Aarey, adjacent to a congested highway in the heart of the city, is sacrosanct. It is unique because they were continuing a deeply rooted tree-planting family tradition.

But it isn’t just any kind of tree saplings that he planted. Based on traditional knowledge, Athalye purposefully planted five native tree species: peepal (sacred fig/Ficus religiosa), vad (banyan/Ficus benghalensis), amla (Indian gooseberry/Phyllanthus emblica), bael (Aegle marmelos) and ashoka (Saraca asoca) that are collectively called panchavati (grove of five trees). Through the years, he also added 550 saplings of these native trees to a patch of land that grew into a densely wooded area and was later publicly known as Panchavati as well. “These tree species, planted together in specific directions, are believed to increase oxygen in the atmosphere,” said Sandeep, displaying his father’s compiled notes about tree plantations. Though the land was later allotted to one of Mumbai’s defence forces and became restricted to the public, Athalye was known for this deed.

After his father’s demise in 2015, Sandeep’s family continued the tradition of greening the city, having planted approximately 700 saplings of native species to date. To fulfil the senior Athalye’s wish, the family also planted 1200 shrubs and converted another barren plot into a bustling butterfly garden. “We must give back to nature,” said 39-year-old Sandeep. 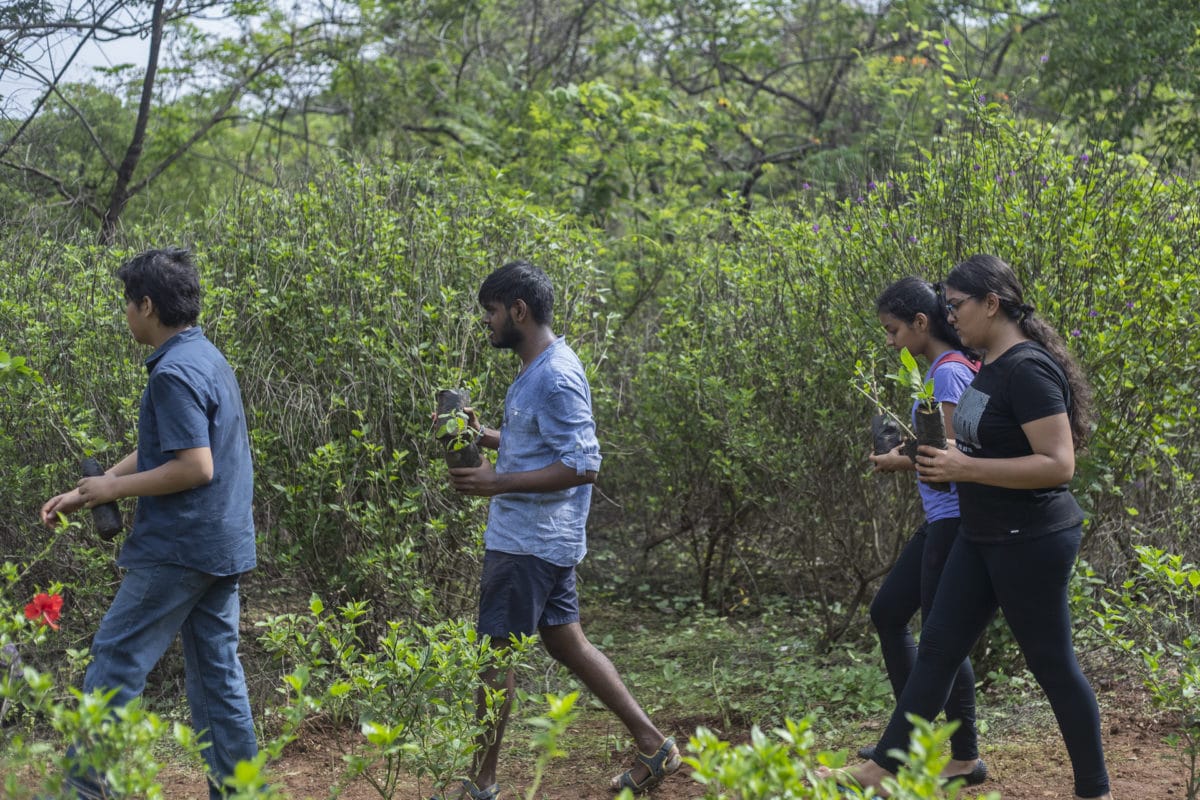 Young participants carry saplings in the butterfly garden set up by the Athalye family in Aarey Milk Colony, Mumbai. The family, along with the help of volunteers, planted 1200 shrubs which would host and provide nectar to butterflies. Photo by Kartik Chandramouli/Mongabay.

Green and open spaces are a rarity in this densely populated megacity of over 12.4 million.

Rashneh Pardiwala, ecologist and founder of the Centre for Environmental Research & Education (CERE), explained, “One of the areas of concern in India is the diminishing availability of green spaces in our major metros. Today, Mumbai, for example, has just 1.1 square metres of open space per person, including Sanjay Gandhi National Park, gardens, recreation grounds, and playgrounds.”

The Environment Status Report (ESR) 2017-18 conducted by the governing civic body of Mumbai, Brihanmumbai Municipal Corporation (BMC), revealed that the city has one tree for every four people – an insignificant number compared to the eight trees per person recommended by a study by the Indian Institute of Science (IISc), Bengaluru.

Further, a recent study by the Indian Institute of Technology (IIT)-Bombay highlighted how people from lower socio-economic backgrounds have less access to green spaces in Mumbai. Ronita Bardhan, a co-author of the study and assistant professor at the Centre for Urban Science & Engineering at IIT-Bombay, said, “Urban green spaces are loosely defined in Mumbai as compared to cities such as London and Singapore. These places should be accessible as well as safe for people. Our cities need a green audit to understand the health of these spaces and to decide what needs protection or restoration.”

Many studies have demonstrated that coastal cities such as Mumbai are highly vulnerable to the impacts of climate change. And green spaces are a crucial part of urban infrastructure.

Trees aid in carbon sequestration i.e. they act as a sink by absorbing carbon dioxide (CO2) from the atmosphere and release oxygen (O2) in the process. The increase in the amount of CO2 due to anthropogenic reasons is one of the leading causes of climate change. A recent study claims a natural solution to mitigate this: plant a trillion trees in specific regions of the world to capture 25% of CO2. A volunteer places a sapling during a tree plantation drive organised by the Athalyes in Aarey, Mumbai. Urban green spaces provide a plethora of benefits and mainly act as a sink to absorb carbon dioxide and other harmful pollutants. Photo by Kartik Chandramouli/Mongabay.

“A single mature tree can absorb about 20 kg of CO2 per year, which equals to emissions from driving over 80 km in a passenger car,” said Pardiwala.

CERE has planted 46,557 large native trees across 61 locations, including many sites in Mumbai under its Urban Afforestation Project (UAP). The initiative helps companies, organisations, and individuals to reduce their carbon footprint and has sequestered 12,602 metric tonnes of CO2.

The benefits of a green cover branch in several directions. It regulates the local climate and reduces the urban heat island effect caused by heat trapped between the artificial structures of the city. Urban trees also play a crucial role in reducing air pollution as the leaves absorb harmful pollutants rising from vehicles, industries, and other sources.

Green spaces in urban areas provide shelter to local biodiversity, act as sound and wind barriers and contribute to the social, mental, and physical well-being of people – the list goes on.

Fortunately, the barren plot where the second-generation Athalyes established a butterfly park is at present free for all to access and enjoy. A kaleidoscope of butterflies might welcome visitors who enter the garden. Aarey has recorded 86 butterflies species, and Sandeep is hopeful to shelter them here.

The Athalyes have never been alone in the journey though. The senior Athalye was supported by his walking partners and received donations from individuals and other communities who were inspired by his efforts. Sandeep continues to receive funds from many of them and has added other corporates, NGOs, communities, and individuals to his band of funders. Participants plant peepal seedlings in a plot of land in Aarey. Over 400 people attended this plantation drive by the Athalyes to plant 300 peepal saplings. Photo by Kartik Chandramouli/Mongabay.

But his idea doesn’t end with planting a sapling. He invites volunteers to the plantation drives and makes them aware of the benefits of planting indigenous trees and hopes to give them experience and get inspired. “They should not just become opportunities for selfies,” he said. “Once you plant a sapling, you have to monitor it like a baby for the first few years.”

A recent drive in a roughly three-acre plot of land which opened up to a view of Mumbai’s skyscrapers at the horizon pleasantly surprised Sandeep. He expected around 100 to 150 people to attend and plant 300 peepal saplings but 400 – 500 people turned up.

Sandeep is relieved that his six-year-old son gets the chance to get his hands dirty in the soil, acknowledging the alienation of several urban residents from the environment. He believes it will help him form a bond with nature and become sensitive to its issues.

India pledged to reduce its national emissions by creating an additional carbon sink for 2.5 to 3 billion tonnes of CO2 equivalent through additional forest and tree cover by 2030. Mumbai, like many other cities in India, bears witness to rapid urban infrastructure projects, mostly at a disproportionate environmental cost. At such a time, the efforts of individuals and communities to safeguard or revive existing ecosystems and create new ones can be crucial.

“There are three types of people: one who damage the environment, those who watch the damage happening and comment on it. I want to be in the third category who do whatever they can to protect the environment,” said Sandeep.