EY’s Global Fraud Survey finds that millennials are most corrupt

Updated : April 27, 2018 12:42 PM IST
The Survey finds that there has been “no reduction in global fraud and corruption in last two years”.
11% of global corporates admitted that they experienced a significant fraud in the last two years.

Organisations are increasingly using digital technology to change the way they do business.

Increased connectivity means a heightened exposure to fraud, corruption and other risks.

EY in its biennial global fraud survey of 2550 companies across 55 countries attempted to gauge fraud in businesses, and it is quite clear now, if it was not earlier, that we are a corrupt set of people!

“Despite regulators and law enforcement agencies around the world imposing more than $11bn in financial penalties since 2012, 38% of global executives still believe bribery and corrupt practices remain prevalent in business,” the survey found. The Survey finds that there has been 'no reduction in global fraud and corruption in last two years'.

11% of global corporates admitted that they experienced a significant fraud in the last two years.

Question: Experienced a significant fraud over the last 2 years

Only 20% of respondents from the developed world said bribery and corruption is a common practice, compared with 52% of those in emerging markets.

Risk of corruption was highest in:

Integrity is important for corporate leaders with 97% recognising the  importance of their organisation being seen to 'operate with integrity'.

Despite that, 41% think it is the organisation’s primary responsibility and only 22% believe that the individual should share the burden.

While customer perception, staff retention and business performance are all seen as benefits of integrity, there is mismatch between intention and actual behavior of employees as 13% say that it is totally justified to make cash payments to win or retain business.

Not surprisingly, the study found that the group who did not believe it was primarily an individual responsibility to ensure that employees behave with integrity is more prone to act inappropriately. 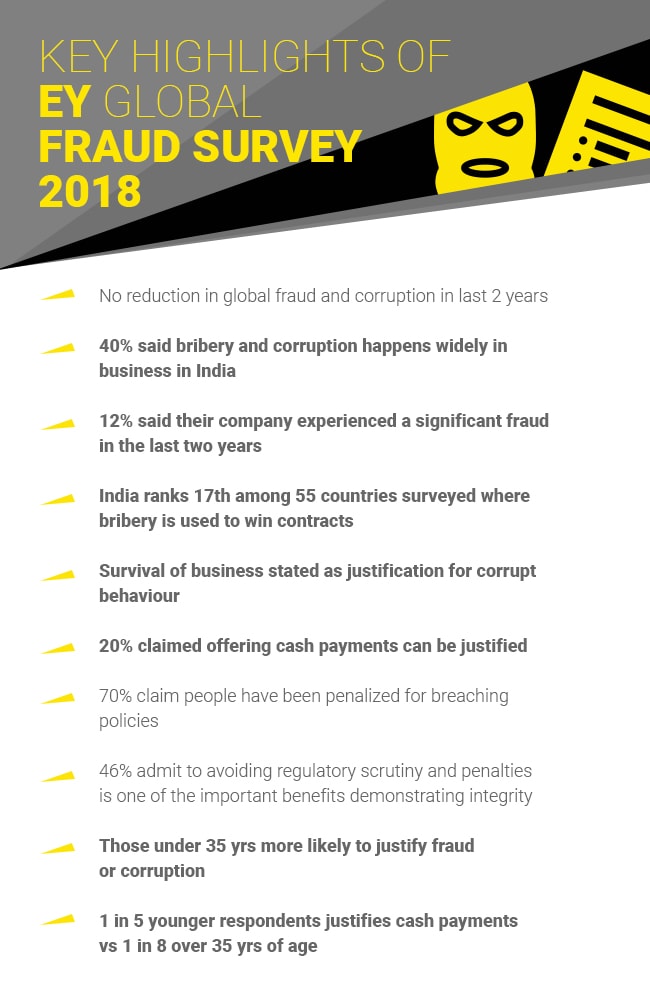 Question: Can cash payments be justified?

Number 4: Millenials are the most corrupt

Despite being the generation with the most potential, millenials have also emerged as the most corrupt business persons.

According to the Survey, those under 35 years of age are more likely to justify fraud or corruption to meet financial targets or help a business survive an economic downturn, with 1 in 5 younger respondents justifying cash payments compared to one in seven respondents over 35.

Number 5: Corruption is ‘made in India’

Almost half of all finance team members interviewed stated that they would be prepared to engage in at least one form of unethical behaviour to meet financial targets or safeguard the company’s economic survival.

When it comes to India, 40% of the 50 companies interviewed admitted to paying a bribe for business.

In fact, India ranks 17th among 55 countries surveyed where bribery is used to win contracts. Survival of business was stated as justification for corrupt behavior.

Anti-corruption enforcement by global agencies continues to accelerate, but there is still a significant lag between the introduction of laws and real change being made by organisations on ground.

For example, Brazil that has seen a huge thrust on legislation and increased enforcement over the last four years, had 96% of respondents saying corrupt practices occur widely in business.

In the US, however, where enforcement of the Foreign Corrupt Practices Act (FCPA) intensified in the mid-2000s, perceived levels of corruption fell this year to 18%, an improvement from 22% in 2014.
Tags EY Fraud report