After New Delhi eased restrictions for Chinese imports, a fresh issue has now emerged at India-Bangladesh border as West Bengal government has issued informal orders to restrict entry of import consignments coming from Bangladesh through land route over COVID-19 scare.

West Bengal government demanded that truck drivers should do 14 day quarantine and only then they can be allowed to enter, which is not acceptable to drivers and thus, the border doors have been shut down. 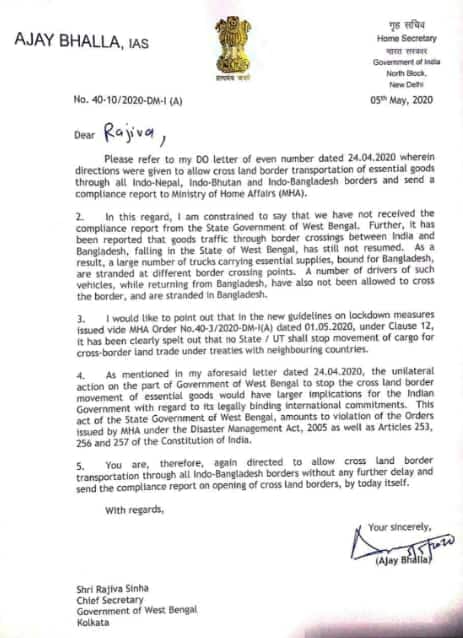 After relentless persuasion by Federation of Indian Export Organisations (FIEO), exports and imports finally resumed at these land ports from June onwards as per orders issued by the district administration.

However, once again the cross border trade got stalled, a few days back across the Petrapole-Benapole and the Ghojadanga-Bhomra international land borders.

"Not a single Bangladesh truck, vehicles are entering Indian territory for completion of imports. The situation at the ground has worsened over the last couple of days since the Kalitala parking authorities at Bongaon, which is near to the Petrapole border has completely stopped allowing entry of new export trucks with current date of registration," said Ajay Sahai, director general, FIEO.

"Over the last few days, several new conditions were being laid on trucks. The Exim fraternity is at a complete loss as such fees and charges sound illogical, unreasonable and unjustified. Further, it was conveyed by local administration that the district administration was supposed to come out with a SoP for the resumption of imports through these two borders. But, no such development has taken place till now," Sahai added.

Some of the immediate challenges, the trade halt situation poses to the Exim community are: mounting financial losses, soiling, pilferage and restricting market access to other South East Asian countries.

"Presently, around 2,097 Indian export cargo trucks are stranded at Petrapole. While around 500 to 550 trucks and tankers including perishable items are waiting at the Benapole and Bhomra borders respectively," Sahai added.

Central government sources said that if such a cross border stalemate continues, it will impact bilateral trade relations between India and Bangladesh.

"Exim trade bodies have submitted representations saying that such a situation if not resolved soon, will lead to loss of jobs, livelihood. Internationally, such issues get bad name for the country as it shows that India could not abide by the international trade obligations. It also poses risk of loss of markets for Indian exporters to other major South Asian countries as a lot of traders use this border as a via route for import-exports," said a senior central government officer.

According to government data, around 60 percent of the Exim trade between India-Bangladesh takes place through the land routes. The current restrictions by the West Bengal government are slowing down Exim trade via land route, however, Exim trade via sea and air route are normal and have not been impacted.