Employees' bargaining power likely to remain high: The job market is set to see an uptick in hiring as recruiters expect attrition to rise further in the coming months. Naukri, a leading job portal, sees a big jump in demand for those with an experience of at least 3 years.

The recent series of layoffs in companies like Better.com, Meesho, Unacademy and Trell, or the spate of resignations — at Whitehat Jr and UpGrad — does not mean that the excess of jobs over talent may reverse in a hurry.

Worried employers unable to acquire talent that's demanding hefty pay packages, even at entry-level, may not get a breather any time soon as skilled employees, such as those in the tech or financial services sectors, still have more chips in hand for at least a few more months. And, that could mean good pay hikes in the appraisal season too. Check the estimates below. 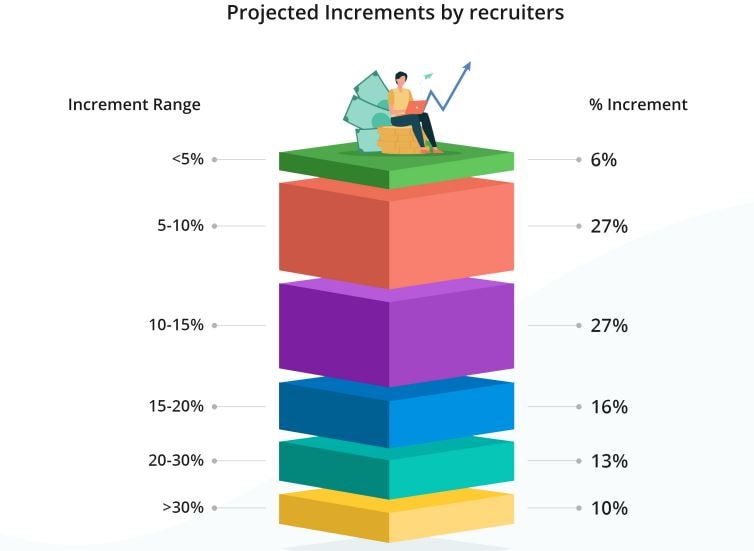 Source: Naukri's Hiring Outlook Report 2022
The job market is set to see an uptick in hiring as recruiters expect attrition to rise further in the coming months. Naukri, a leading job portal, sees a big jump in demand for those with an experience of at least three years. While experts in staffing services do not see an immediate shift from an employees' market to an employers' market, they do expect a gradual, natural, reversal of the great resignation phenomenon.
Balasubramanian A, TeamLease Services VP & Business Head, Consumer & Healthcare, believes the employer generally holds a slight edge over employees in the job market. “It's only been the last three months where there has been a bit of an aberration — where because of the great resignation, employees had kind of all the cards. But a reversal is bound to happen.”
He thinks the tables may start to turn in the second quarter of this fiscal, but not immediately. According to him, hiring intentions haven't exactly changed yet and markets will remain optimistic and bullish for the course of this financial year. 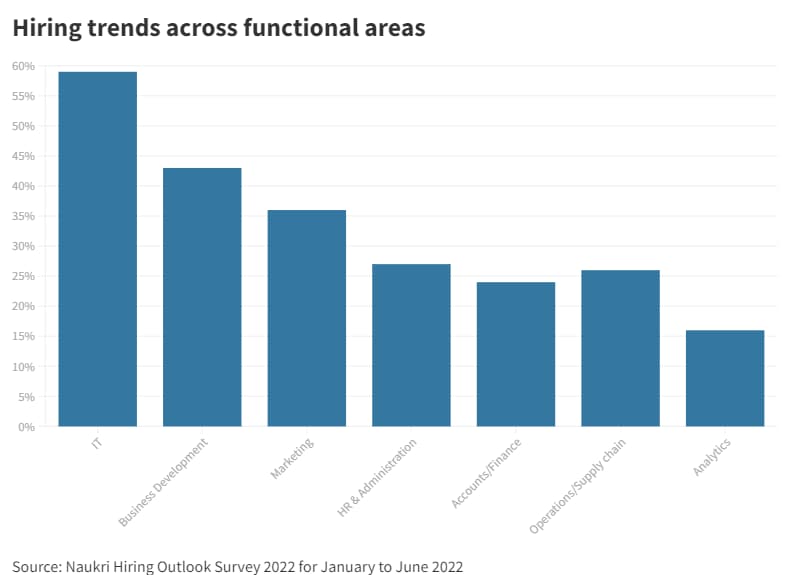 Sekhar Garisa, CEO, Monster.com, attributed the overall trend in favour of employees basically to the demand-supply gap in the job market. While professionals are asking for and also getting higher remuneration, many also want more flexibility.
"To deal with this shift in the market, companies must adopt new policies and  redefine their retention and appreciation strategies to build trust among existing employees. This will create a win-win situation for both employer and employee," he said.
However, it may not continue in the same frenzy, but we’ll continue to witness the employee’s market for at least a few more months, he asserted.
Jobseekers likely to continue to dictate terms
Business service provider Quess Corp expects the return of bargaining power in employers' hands sector-wise, but not an overall, sudden shift.
Lohit Bhatia, President — Workforce Management, Quess Corp, believes IT and ITeS will potentially see high attrition for at least the next 2-3 years, if not more. Retail, hospitality, aviation, tourism, and consumer space will also see an attrition rise as these sectors were negatively impacted by multiple COVID-19 waves. So, they will now add capacity and expand, he said.
Banking, financial services and insurance (BFSI) and telecom, on the other hand, are based on broad market and GDP growth. As GDP increases, these segments will show attrition within which new-age manufacturing like renewals, EVs, energy, assembly line, etc will see higher demand due to new investments planned in India, Bhatia explained.
This includes impact of government’s production-linked incentive (PLI) scheme in manufacturing, increased infra spend on roads and construction segment, and 5G impact on the telecom sector, he added.

Source: Naukri Hiring Outlook Survey 2022
Although a marginal dip has been registered in engineering, cement, construction, and iron/ steel, the industry has seen a revival in job activity in April, according to MEI data.
Also, while Tier 1 continues to post robust growth, hiring has improved in Tier-2 markets as well. Following the reverse migration of workers to Tier-2 markets, and the newer trend of work moving to talent has also created job opportunities in emerging cities and towns, Bhatia said.
“Baroda exhibited a significant increase (up 15 percent) in hiring demand, followed by Kochi and Kolkata (up 8 percent) and Jaipur (up 3 percent). Though Chandigarh showed muted growth in April 2022 from the year-ago level, the overall city-wise data shows the perceptible signs of upcoming growth stories for job creation in these cities,” according to Monster Employment Index’s April 2022 data released by Monster India, a Quess company.
The situation is not the same across the board…
The startup ecosystem has already started to feel the pressure in reverse. Many startups and new-age tech firms have already started mass layoffs — companies like Uber are considering hiring a ‘privilege’ — as funding has slowed down.
“Startups that were adding personnel and were raising funding at higher valuation/working on cash-burn models may see a slowdown as the new fundraise slows thus slowing the overall hiring intent,” Bhatia told CNBCTV18.com.
Media & entertainment (down 17 percent) also observed fewer job opportunities since last year, according to MIE data.
Quess Corp Workforce Management President explained that with low hiring for almost two years in some segments, high growth cannot be delivered with low investment in new hires. Hence, that will be a key factor in achieving growth in the coming quarters.
Mahesh Vyas, MD & CEO, CMIE also flagged concerns about investments.“For us to see a real turnaround, we require increased investments,” he told CNBC-TV18 and stressed on the need for manufacturing and services sectors to boom at a much higher pace for the informal sectors to flourish as well.
What does the coming appraisal cycle hold?
Monster.com CEO Garisa says with appraisals around the corner, the attrition rates are subdued. Companies are re-evaluating their appraisal models to keep up with the rising inflation and which in turn helps them to retain their talent.
“This will reinforce their attention towards their valuable asset ensuring employee retention along with their job satisfaction. Also, employers are seen working more towards employee engagement and value proposition which makes employees feel valued within an organisation,” he said.
However, Naukri Hiring Outlook Survey suggests recruiters predict better increments for job seekers in the coming months with 40 percent expecting average raises to be over 15 percent, and only 6 percent expecting to rollout an increment below 5 percent.
Quess Corp’s Bhatia believes the current appraisal cycle is dependent on the past, i.e. 2020 and 2021. Hence, the appraisal will factor those years and thus assuming a 100-150 basis points higher appraisal in the current cycle in India.
Future hiring will depend on how 2022 progresses, in case the inflation becomes a runaway issue and central bankers do not react, we could be in a different scenario, he added.
Check out our in-depth Market Coverage, Business News & get real-time Stock Market Updates on CNBC-TV18. Also, Watch our channels CNBC-TV18, CNBC Awaaz and CNBC Bajar Live on-the-go!
Tags