Despite controversies on tribal issues, BJP wins in tribal constituencies

Updated : June 03, 2019 04:33 PM IST
Issues related to tribal communities and forest dwellers had gained public and media attention just ahead of India’s recently-concluded 2019 parliamentary elections.
However, the outrage on the issues failed to translate into electoral gains for opposition parties. Of the 47 seats in the elections, reserved for scheduled tribes, the ruling Bharatiya Janata Party won more than half and even improved its performance from the 2014 elections.
The tribal community didn’t vote as a single block and were swayed by BJP’s focus on nationalism, emphasise civil society groups and political experts

Controversies and uproar around tribal issues over the past few years failed to make a dent in the recent elections with the tribal community in fact voting to reinstate the government held responsible for many of these issues. The first tenure of the Prime Minister Narendra Modi led National Democratic Alliance (NDA) government saw tribal people facing displacement from forests, debate around poor implementation of the Forest Rights Act 2006 and dilutions in the green laws hampering tribal rights. But the issues did not show an impact in the recently concluded 2019 parliamentary elections in India where the Bharatiya Janata Party (BJP) won more seats reserved for scheduled tribes in the 2019 elections, as compared to the 2014 elections.

Of the 543 seats in Lok Sabha, 47 parliamentary seats are reserved for candidates of the scheduled tribes and the BJP won well over half of them in these elections, despite the agitations on tribal issues preceding the elections.

In September 2018, thousands of farmers and tribal people marched to the national capital to protest against several issues including poor implementation of the Forest Rights Act (FRA) 2006.

Subsequently, just ahead of the 2019 elections, in February 2019, the Supreme Court of India directed the state governments to evict those tribal people whose claims under the FRA 2006 had been rejected. However, the NDA government was soon cornered by opposition parties on the issue following which the government approached the SC and the eviction order was stayed. The order could have impacted nearly two million tribal families which means 8-10 million people. The opposition parties, especially the Indian National Congress led by Rahul Gandhi, had also aggressively taken up the issue. But it didn’t bear any major electoral fruit for them.

In March 2019, the central government’s move to amend the Indian Forest Act (IFA) 1927 gained attention. The proposed amendments plan to give more powers to the forest authorities and encourage large scale afforestation but experts stressed that it could also lead to an increase in injustice to forest dwellers. 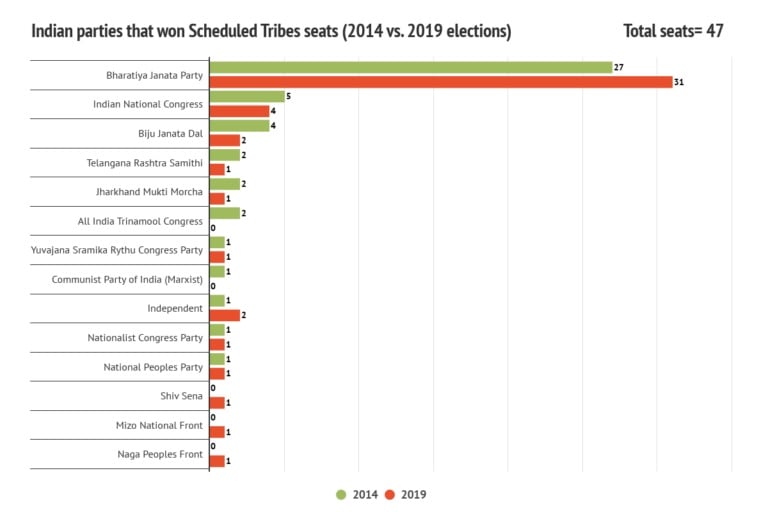 In 2019 elections, BJP improved its performance in parliamentary seats reserved for scheduled tribes as compared to 2014 elections. Source: Election Commission of India.

Mukhopadhyay emphasised that over the last four decades, the Rashtriya Swayamsevak Sangh (RSS) through a concerted outreach programme in the tribal seats in the north and western India, has been able to make them (tribal people) a part of the Hindutva (Hindu nationalism) constituency. RSS is the ideological parent of the BJP.

“This has played a very major role in the reserved seats in the Hindi heartland. That is why you see stalwart tribal leaders from regional parties like Shibu Soren (of the JMM) losing to the BJP. This means that regional parties which used to voice tribal concerns are no longer being looked as alternatives. For instance, see the way BJP has performed in the last several elections in Chhattisgarh. Basically, the RSS has reached out to tribal people and conducted a campaign that you are part of the larger Hindu society,” Mukhopadhyay told Mongabay-India.

It is not just the regional parties that failed to rally tribal people behind them. Even a party like Bharatiya Tribal Party, founded by a tribal leader, focusing mainly on the welfare of tribal communities failed to win even a single seat.

“Why will tribal people vote for someone who is planning to push them out of the forest which is their home? This election result is due to the manipulation of the electronic voting machines. If elections are conducted by ballot paper today the picture will change. The issues of forest dwellers and tribal people are the main issue for us and we will continue to fight for them,” Chhotubhai Amarsinh Vasava, who is the founder of the Bharatiya Tribal Party, told Mongabay-India.

BTP fought on 17 seats across constituencies in Gujarat, Maharashtra, Madhya Pradesh, and Rajasthan but failed to win any seat.

“The problem is that this election was fought on non-issues. Issues like displacement, mining, and implementation of forest rights did not find resonance in the 2019 Lok Sabha elections. In the past few years, issues of farmers, the stress in the rural sector and problems faced by tribal people got the attention but BJP was successful in changing the narrative through the issue of nationalism. So, even if a farmer is facing problems he is voting for the BJP in the name of strengthening the country. It was not an issue-based election,” Alok Shukla of the Chhattisgarh Bachao Andolan told Mongabay-India.

Explaining further the reasons behind BJP’s success, Nilanjan Mukhopadhyay stressed that the underlying message of the entire campaign was to put nation above all other issues.

“They were made to feel that it is the time to think for the nation and not just for the small personal demands. That is what I think has prevailed in this election,” said Mukhopadhyay. 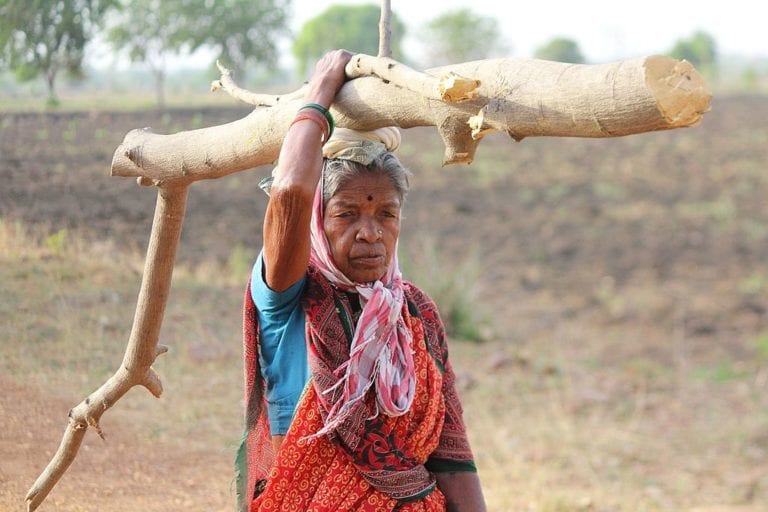 Experts believe the tribal community got swayed by the issue of nationalism. Photo by Azhar Feder/Wikimedia Commons.

But leaders stressed that it is not an end to their struggles for ensuring the welfare of the tribal community.

A senior Congress leader, who wished to remain anonymous, said throughout the 2019 elections they highlighted the issues of tribal people not getting justice, but it didn’t translate in support for them.

“Our party was very vocal about the problem of the tribal community. We were the ones who enacted the FRA 2006. Our party’s president Rahul Gandhi had even asked the chief ministers of Congress-led governments in Rajasthan, Madhya Pradesh, and Chhattisgarh to oppose SC’s decision and file a review petition. We will continue working on the issue,” said the Congress leader.

BTP’s founder Vasava too said that they would continue their struggle and unite tribal leaders from across India under one single platform.

“We are not giving up as no one is going to fight for the tribal people. We will take this struggle to a logical conclusion ourselves because no matter who forms the government they are not going to work for the welfare of the tribal community. Over the next few years, we will unite all tribal leaders under one platform,” Vasava stressed.