On Denver’s 16th Street, weird names were whirling in my head - Cookie Wreck. Death by Lemons. Durban Poison. Cobra Lips. No, I was not tipsy. Death was not a thought. I am not an opium-eater. And 4/20 certainly is not my shorthand for smoking marijuana. I do not smoke the weed. Never had I. In Colorado’s capital, I had no intent to get high in Denver, the Mile-High City.

Curiosity that killed the cat drove me to Euflora, a store selling legal recreational marijuana. A huge digital signboard beamed ‘Make America Green Again’ and by the wall was nailed a notice: ‘Must be 21 years of age. No exceptions’.

Cookie Wreck. Death by Lemons. Durban Poison. Cobra Lips. I had picked these marijuana strain names off Euflora’s menu. It was my first time ever into a marijuana store and my mind was repeating the strain-names to sound weed-smart.

An automatic door opened into a huge store. Weed lay curled in bowls on tidy tables, tablets were loaded with information and men were staring fixedly at muggles, skunkweed, Mary Jane, mezz, dagga, mootah, bambalacha, mohasky, boo (too many synonyms for marijuana).

“Do you have an id?” Perched on a high chair, the fat security guard in blue snarled. “No. But I am over 21”, I stood my ground. “No exceptions. You cannot enter,” the guard snarled louder. “Go away. Come back with an id,” he shrieked and the automatic door closed behind me. My first marijuana-store tootle was such a dead duck.

Kendall Norris would have been politer than the fat guard. The founder of Mason Jar Events — wait, roll your blunt — does cannabis pairing events. Norris compares cannabis-pairing with wine-pairing. “Some of the cannabis-flavour profiles can be similar to wine, eg., hints of tobacco, chocolate, citrus…

One of our favourite pairings is the strain Tangie. Rich in citrus notes, this marijuana strain is paired with bright mixed greens and citrus salad,” says Norris who started in 2016, and has so far done 14 sold-out cannabis-pairing dinners for the canna-curious and the canna-connoisseurs.

In Colorado, weed is not a hush-hush whisper. In 2012, it became one of the first states in the United States to legalise recreational marijuana. Adult-use marijuana stores opened in 2014, and as of March 2018, there were more than 38,000 issued individual licenses in the marijuana industry, including 1,637 business owners.

According to Colorado Department of Public Health & Environment’s Medical Marijuana Registry Program, as of April 2018, 88,946 patients have an active medical marijuana registration.

Here, marijuana is not about gummy ribbons and cheeba chews. The green leaf gets the economy high. In 2017, Denver County registered $577.5 million in cannabis sales. In January 2018 alone, dispensaries collected $ 118 million. Since 2014, marijuana industry has generated $617 million in the Centennial state.

The first $40 million collected each year goes to building and renovating deteriorating public schools. Legalisation has led to a 6 percent increase in housing values, with single family residences within 0.1 miles of a retail marijuana establishment witnessing an 8.4 percent increase.

According to dictionary.com, marijuana is altered by influence of Spanish proper name Maria Juana ‘Mary Jane’ from mariguan (1894), from Mexican Spanish marihuana, of uncertain origin. The first known appearance of a form of the word marjuana in English is in Hubert Howe Bancroft’s 1873 The Native Races of the Pacific States of North America.

If the fat guard at Euflora had let me in, Bob Marley’s words would have come true. Marley said: “When you smoke the herb, it reveals you to yourself”. I would not have smoked the herb, but in Denver, the Mile-High City, Cobra Lips, Cookie Wrecks and Durban Poison might have revealed me to myself! 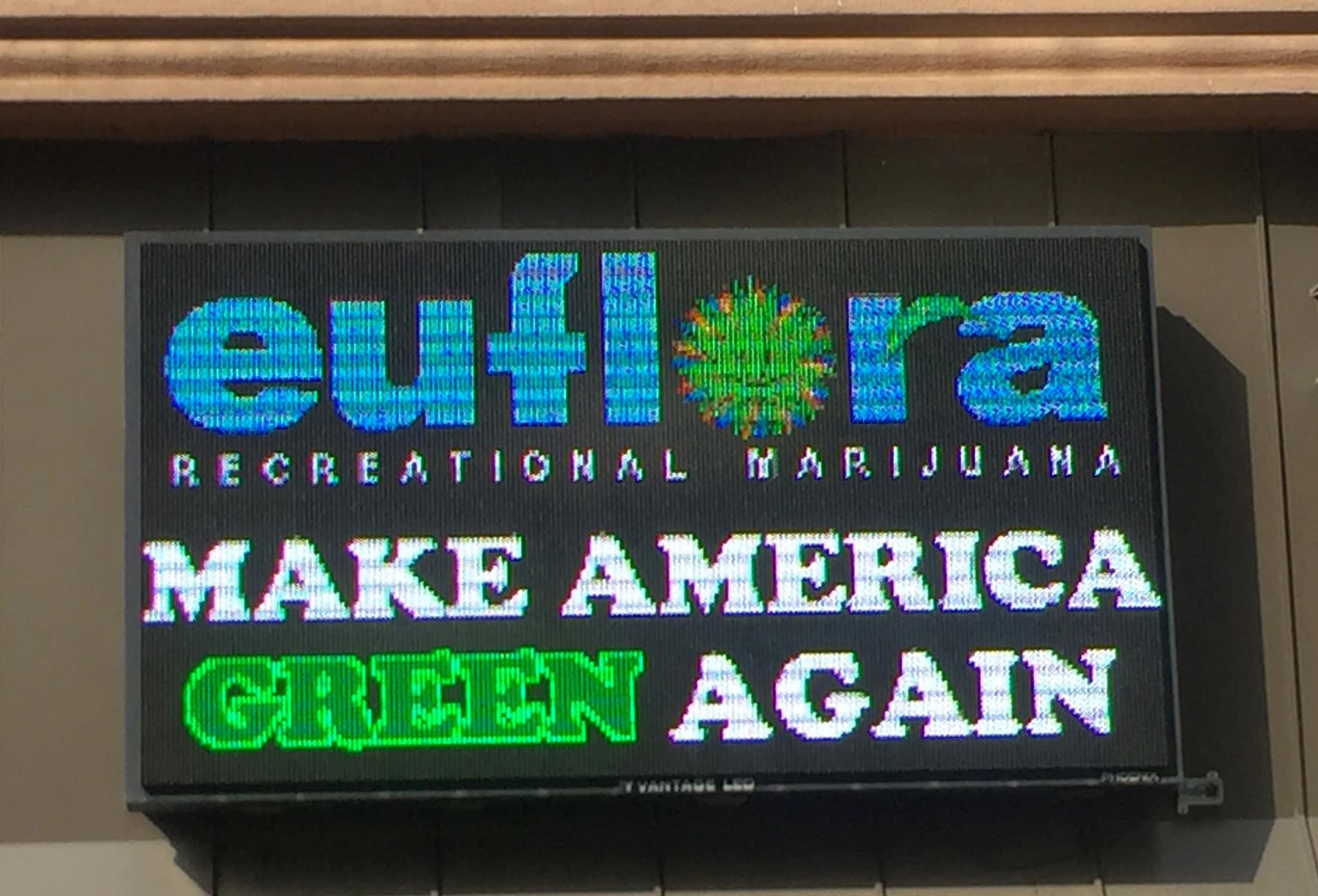