Updated : August 06, 2019 04:11 PM IST
About 100 years ago, Mirzapur forest area in Uttar Pradesh was home to rich wildlife population including tigers and cheetah but the wildlife population has declined over the decades.
A camera trap study has now recorded a thriving wildlife system including the presence of several protected species that have been recorded for the first time, such as the Asiatic wild cat, rusty-spotted cat and leopard.
The study has recommended to the government to notify a part of the Mirzapur’s forest area as a conservation reserve with sloth bear as a flagship species. It noted that the Mirzapur forests are an important wildlife corridor for protected areas around it.

Historical references reveal that a little over a 100 years ago, during the British rule in India, the forests of Uttar Pradesh’s Mirzapur area were home to rich wildlife, including species like cheetah, that are now extinct in India. While wildlife population has been declining in the forests for some years, a latest camera trap study has recorded thriving wildlife with several protected species surveyed in the area, including some recorded for the first time.

With these observations, the study has recommended about 408 sq. km identified from the forest area to be declared as a ‘conservation reserve’ by the government to ensure that it gets the desired attention and protection against threats like logging, poaching, encroachments and mining. It also called for declaring sloth bear as the flagship species for the Mirzapur conservation reserve

The study was authored by Debadityo Sinha, a wildlife conservationist and the managing Trustee of Vindhyan Ecology and Natural History Foundation, Mirzapur and Rakesh Chaudhary, who is the divisional forest officer of the Mirzapur forest division of the Uttar Pradesh government, along with three other contributing authors Avinash Kushwaha, Mohit Chauhan and Sudhanshu Kumar. The study was supported by Wildlife Trust of India-David Shepherd Wildlife Foundation and Earth Matters Foundation.

The researchers carried out a camera trap survey in three forest ranges of Mirzapur division – Marihan, Sukrit and Chunar – between May 2018 and July 2018. A total of 15 camera traps were deployed at 50 different locations selected randomly covering different habitat types and at locations likely to be used by animals. The study suggests notifying a part of the Mirzapur’s forest area in Uttar Pradesh as a conservation reserve. It’ll help safeguard the wildlife corridor between the protected areas around it. Map adapted from the study published by Vindhyan Ecology and Natural History Foundation.

The survey revealed a “very good representation of all trophic levels indicating a functional ecosystem in existence” and that “most of the camera trap images were captured after sunset, with few instances of daytime images indicating nocturnal movement of animals.”

It recorded three cat species, Asiatic wild cat, rusty-spotted cat and leopard, all of which are recorded for the first time in this forest division. All three are among the category of animals that have the highest protection under India’s Wildlife Protection Act.

The other species recorded in the study, which have the highest protection under the country’s wildlife laws, are sloth bear, Indian wolf, Indian gazelle, blackbuck, peafowl, Bengal monitor and Mugger crocodile. Photographs from camera traps installed in various locations of the proposed conservation reserve. All photos from Vindhyan Ecology and Natural History Foundation.

It, however, specified that the list “may not be considered as a complete list of wild animals found in this landscape” as the camera trap exercise was greatly limited to some representative samples and there is a “high possibility that few species may not have been captured.”

“The forests of Mirzapur have always been known for a remarkable description of its wildlife diversity in British literature. Unfortunately, the same has remained largely neglected for years. The camera trap study is expected to fill the gap and to acknowledge the wildlife presence which includes several species previously never recorded both in the district and state. The findings should be enough to convince the state to declare the region as a conservation reserve,” lead author Sinha told Mongabay-India.

The study also observed that this rocky landscape with low elevation hills are particularly suitable habitat for sloth bears and their presence is recorded in all the forest ranges surveyed in this work.

Sloth bears are endemic to the Indian subcontinent and in Uttar Pradesh, Mirzapur forest division is one of the remaining sloth bear habitats. The International Union for Conservation of Nature’s Red List describes the population of sloth bear (Melursus Ursinus) found in India, Nepal and Sri Lanka as ‘vulnerable’ with numbers decreasing.

“The area is very rich in biodiversity and wildlife and needs protection.  If it is notified as a protected area then it will serve the purpose of conservation of sloth bear beside other important flora and fauna,” S.P. Yadav, who is the member secretary of the Uttar Pradesh’s State Biodiversity Board, told Mongabay-India.

As per the study, the forests of Mirzapur are classified as tropical deciduous forests that have long and intensely hot summers, low rainfall and short mild winters. Many small rain-fed streams and rivulets pass through the entire hilly terrains which are almost dry during the hot summer.

It observed that the wildlife richness of Mirzapur and the threat to their habitats can be understood from various incidents of human-animal conflicts which is very common in some areas as “wild animals like sloth bear, leopard, hyena, jackal, deer and crocodile straying in villages are often reported by local newspapers.” 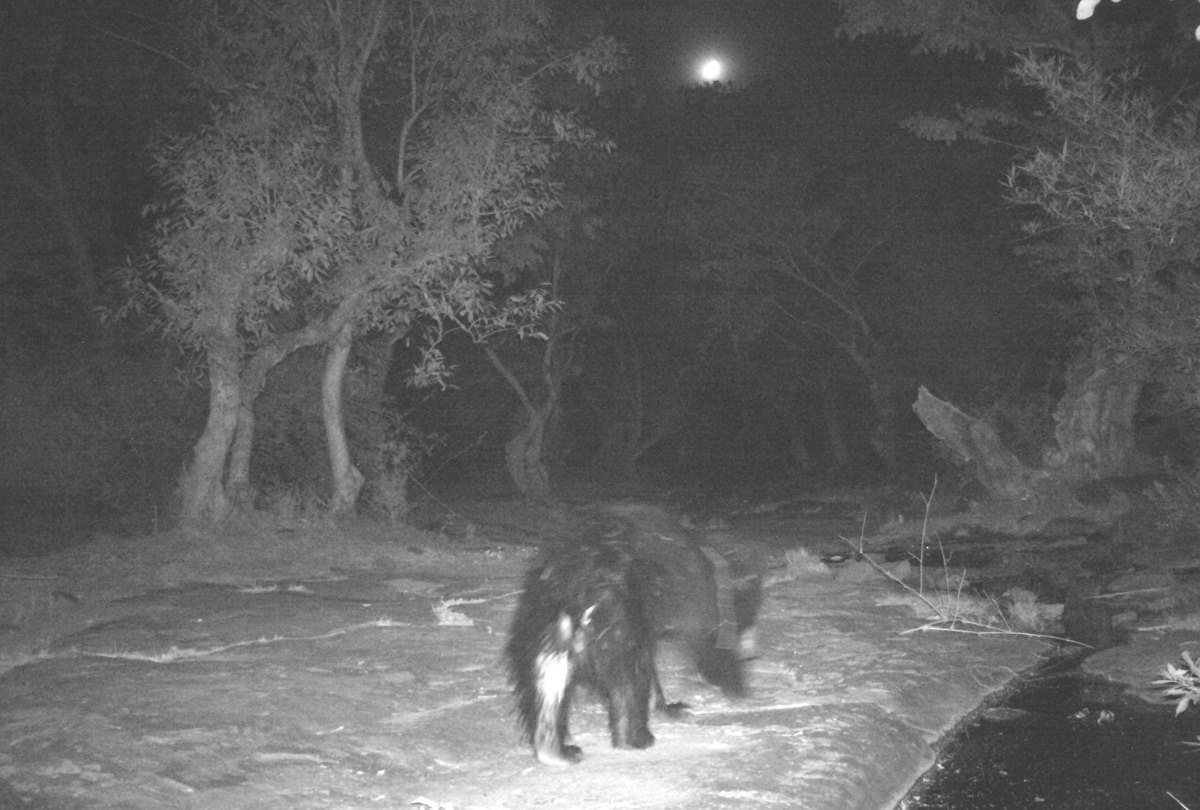 A sloth bear photographed at night. The study suggests declaring the sloth bear as a flagship species for the proposed conservation reserve. Photo from Vindhyan Ecology and Natural History Foundation.

“Declare the area as a conservation reserve”

The study noted that the forest area of Mirzapur is facing severe threats from activities like mining, logging, hunting, unsustainable construction and infrastructure development, the encroachment of forests and watersheds and forest fires. It proposed a conservation reserve in Mirzapur forest division which will include Marihan, Sukrit and some parts of Chunar and Lalganj ranges with an area of approximately 408 square kilometres.

India’s network of the protected area comprises national parks, wildlife sanctuaries, conservation reserves and community reserves. At present, the country has a network of 869 protected areas spread across an area of 165,158 square kilometres which is about 5.02 percent of India’s total geographical area.

Conservation reserves are declared for the purpose of protecting landscapes, flora and fauna and their habitat outside protected areas. They are often declared with a focus on flagship species such as elephant, tiger, leopard etc. At present, there are 76 conservation reserves in India. Among them, the top five states are Jammu & Kashmir (34), Karnataka (14), Rajasthan (10), Uttarakhand (4), Punjab (4) and Himachal Pradesh (3).

According to India’s Wildlife (Protection) Act, 1972, a state government may, after having consultations with the local communities, declare any area owned by the government, particularly the areas adjacent to national parks and sanctuaries and those areas which link one protected area with another, as a conservation reserve for protecting landscapes, seascapes, flora and fauna and their habitat.

The present study stressed that the forest ranges proposed to be declared as conservation reserve are also of strategic importance for the conservation of wildlife and maintaining the genetic diversity as they are contiguous with protected areas and are part of a larger landscape used by a variety of wild fauna as habitat and meeting their resource needs.

“These forests also act as a huge catchment of different rivers and streams which helps in maintaining the water levels and providing water to many reservoirs and dams in this region which are critical for sustaining agriculture and other drinking water needs,” said the study while noting that in recent years there has been an increased disturbance to the forests from human activities such as conversion of forests for infrastructure development, mining, agricultural expansion, logging etc.

It cautioned that the loss of connectivity between different forest ranges is a matter of deep concern and declaration of conservation reserve will be the first step towards a landscape-based conservation approach.

The study noted the conservation reserve is proposed only in the areas already recorded as reserve forests and the villages in and around these reserve forests. “No resettlement or rehabilitation of existing villages are recommended and the forest division will involve the people dependent on forests for better management of forests and ensuring that the rights of people traditionally dependent on forests for livelihood are least affected,” said the study.