Ministry of Civil Aviation: Airports Authority of India (AAI) conducted review meeting today at Bhubaneswar Airport at 1830 hrs & took stock of the situation. Bhubaneshwar will resume commercial flight operation with effect from 1300 IST on 04 May. #CyclonicStormFANI

West Bengal: Visuals of heavy rainfall from Kolkata. #CycloneFani made its landfall in Puri, Odisha earlier in the day. pic.twitter.com/dZxOHjraOC

The telecom department on Friday reviewed services provided by four operators - Bharti Airtel, Vodafone Idea, Reliance Jio and state-owned BSNL - in areas affected by cyclone Fani, according to official sources.While services in Andhra Pradesh is expected to be fully functional by Saturday morning, the restoration work has already started in Puri and Bhubaneswar (in Odisha), which suffered extensive network damage.The sources also said that the facility for free SMS has already been activated, and free interconnect between Airtel, Vodafone Idea, Reliance Jio and Bharat Sanchar Nigam Ltd (BSNL) has been facilitated to ensure calls can be made on whichever network is available.Among other measures, helpline number 1938 has been activated and the entire situation is being closely monitored, they added.Earlier in the day, India's largest telecom operator Vodafone Idea had said it has initiated contingency measures, including activating emergency helpline number and free SMS, for its customers in Odisha, which is facing a severe cyclonic storm.

As cyclone 'Fani' is expected to trigger heavy rains in the northeast after hitting West Bengal, the Assam government Friday directed all district deputy commissioners and agencies concerned to be on alert and take necessary measures to deal with the situation.The Central Water Commission, in a bulletin, has forecast high rainfall in west and central Assam districts on May 4 and 5.According to a release by the Assam State Disaster Management Authority (ASDMA), state disaster response force (SDRF) personnel have been deployed in 40 locations across the state.The National Disaster Response Force (NDRF) have reached for pre-positioning in Cachar, Barpeta, Bongaigaon, Sonitpur, Tinsukia and Jorhat districts. Dhemaji district and Patgaon in Guwahati each already have an NDRF battalion stationed there, the release said.Toll-free numbers have been set up in the district and state control rooms which will be operational round the clock. The toll-free number for the district control room is 1077 and the those for the state control room are 1070 and 1079. The ASDMA is in constant touch with the central government, the Central Water Commission, India Meteorological Department and disaster management authorities of neighbouring states, the statement said.

State-owned Oil and Natural Gas Corp (ONGC) on Friday restored operations at its fields in the Bay of Bengal after a category-4 cyclone made landfall without causing any disruption to its offshore installations.Official sources said ONGC had as a precaution halted operations, evacuated some 500 employees and towed rigs to safer waters ahead of the cyclone.While cyclone Fani made landfall around Puri in Odisha and is moving towards West Bengal, most of ONGC installations are off the Andhra coast.Sources said all operations have been restored and employees are being moved by boats to installations.There is no loss of production, they said.India's eastern coast is dotted with oil and gas installations, including three refineries and numerous rigs and offshore platforms that are used to explore and produce oil and gas.While operations at Paradip port in Odisha and Visakhapatnam in Andhra Pradesh were shut and ships moved out to sea to avoid damage, the refineries operated normally.Sources said ONGC had six rigs operating off the Andhra coast, four of which were moved away from the path of severe cyclonic storm Fani earlier this week.They will be brought back to their locations over the next couple of days.

Rains lashed parts of Srikakulam district of Andhra Pradesh as a fall out of Cyclone 'Fani', which hit the Odisha coast on Friday, but no human casualties have been reported, officials said.Nine head of cattle and 12 sheep were killed in rain-related incidents, while over 2,000 electricity poles were uprooted because of high velocity winds and 218 cellular phone towers damaged, they said.The extremely severe cyclonic storm made landfall at around 8 a.m. in Puri but thanks to enough advance warning, about 11 lakh people had already been evacuated from vulnerable and low-lying areas of at least 11 coastal districts of Odisha by Thursday.The Andhra Pradesh government's Real-Time Governance Centre, which tracked the cyclone's movement round-the-clock for the last two days and predicted the exact landfall at Puri, came in for praise from the Odisha government.

Govt of India Spokesperson: As per telephonic information, in Puri, extensive damage to kuchha houses, old buildings and temporary shops. No confirmed report of deaths, but 160 reportedly injured. Power and telecom is completely down. NDRF & State forces are clearing roads. #Fani

As per telephonic information, in Puri, extensive damage to kuchha houses, old buildings and temporary shops. No confirmed report of deaths, but 160 reportedly injured. Power and telecom is completely down. NDRF and State forces are clearing roads.

West Bengal: Visuals of heavy rainfall and strong winds from Digha. #CycloneFani made its landfall in Puri, Odisha earlier in the day. pic.twitter.com/uuFGAVimFl

West Bengal: Visuals of heavy rainfall and strong winds from Digha. #CycloneFani made its landfall in Puri, Odisha earlier in the day. pic.twitter.com/uuFGAVimFl

Power utility CESC Ltd on Friday said it has deployed 200 mobile vans around the city to tackle any likely disruption caused by cyclonic storm 'Fani', which is headed to West Bengal from neighbouring Odisha. A company spokesman said the mobile vans are fitted with dedicated radio communication sets, and are capable of promptly springing into action in the event of power supply failure. Focus will also be on electricity supply to drainage pumping stations to reduce water logging in and around the metropolis, he said. "Teams comprising engineers, workmen and contractors are on stanby to respond to consumer requirements across 567 sq km of licensed area," the CESC spokesman said.

Here are the helpline numbers provided at various stations. 'DGCA will issue revised guidelines to airlines as and when necessary'

Aviation regulator DGCA will issue revised advisories to airlines "as and when necessary" in view of the cyclone 'Fani', said Civil Aviation Minister Suresh Prabhu Friday.Prabhu also said that he has directed Pradeep Singh Kharola, Secretary, Ministry of Civil Aviation, to "continuously monitor the situation". Cyclone 'Fani' rolled through Odisha on Friday, packing rain and windstorm that gusted up to 175 kmph, leaving at least three people dead, blowing away thatched houses, and swamping towns and villages.In a series of tweets about the cyclone, Prabhu said he will pledge funds from Members of Parliament Local Area Development Scheme (MPLADS) if necessary "as per the extant rule"."Directed Secretary (MOCA) to continuously monitor the situation. DGCA will be issuing revised advisories to Airlines as and when necessary. Taking all possible steps for passenger safety and to minimise their inconvenience," he added.The Directorate General of Civil Aviation (DGCA) Friday said no flights will depart or arrive at Kolkata airport from 3 pm Friday to 8 am Saturday in view of the cyclonic storm 'Fani'.

Bhubaneswar: A 32-year-old woman gave birth to a baby girl in Railway Hospital today at 11:03 AM. Baby has been named after the cyclonic storm, Fani. The woman is a railway employee, working as a helper at Coach Repair Workshop, Mancheswar. Both the mother&child are fine. #Odisha pic.twitter.com/xHGTkFPlAe

Three people were killed in separate incidents as cyclone Fani battered the Odisha coast Friday, officials said. A teenager was killed when a tree came crashing down on him at a place within Sakhigopal police station area limits in Puri district.

Flying debris from a concrete structure hit a woman in Nayagarh district when she had gone to fetch water, killing her. In Debendranarayanpur village in Kendrapara district, a 65-year-old woman died after suspected heart attack at a cyclone shelter, official information reaching here said. (PTI)

Indian Oil Corporation, the country’s top refiner, said its 300,000 barrels per day (bpd) refinery, its newest facility on the coast of Odisha, had been built to withstand windspeeds of 250 kph and would not halt operations, reported Reuters. However, its 1,500 staff at the refinery were told to stay indoors, a company spokeswoman said.

India’s biggest state-owned oil and gas producer, Oil and Natural Gas Corp Ltd, had shifted people from its rigs off the coast of Andhra Pradesh as a precaution.

A senior company executive in Reliance Industries Ltd, which also runs an oil and gas block adjoining the ONGC block, said the company was following standard operating procedures as prescribed during a cyclone.

#CrowdSourced | The National Disaster Management Authority, Govt of India, has issued a number of guidelines for the safety of the people stuck in the #CycloneFani affected areas. | #TrackingCycloneFani

A fuel station destroyed by cyclone Fani in Odisha 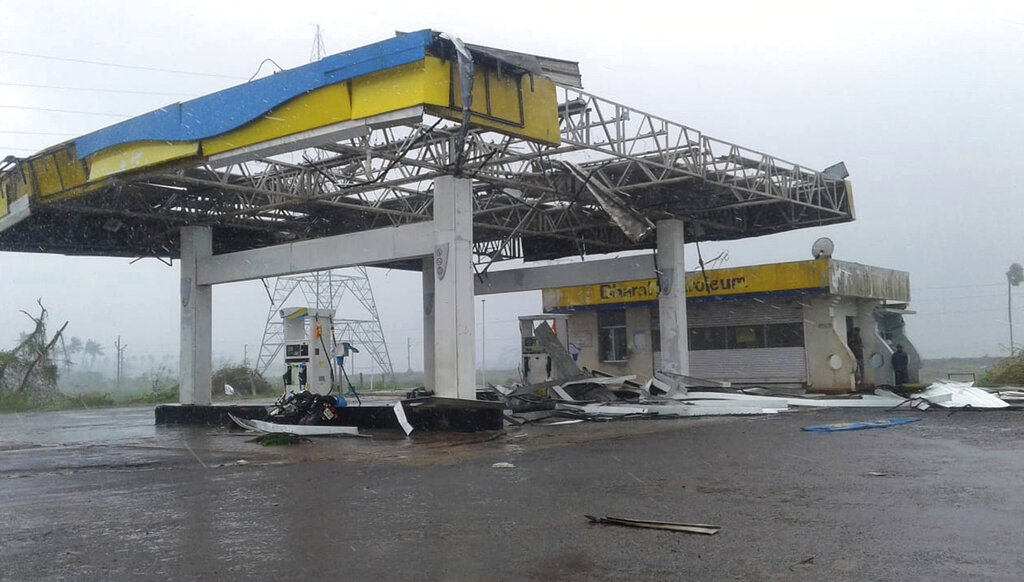 The Election Commission of India has approved a proposal for granting relaxations in the provisions of Model Code of Conduct in East Godavari, Visakhapatnam, Vizianagram and Srikakulam districts of Andhra Pradesh for all the preventive and relief work associated with, reported ANI.

"The outer ring cloud band has already reached the coastal areas of West Bengal and Kolkata, prompting rainfall. The rain intensity will be gradually increasing. As the cyclone comes closer to Bengal it will have a speed of 80-100 kmph," weatherman J. K. Mukhopadhyay said.

"It crossed Odisha coast between Gopalpur and Chandbali close to Puri with a maximum sustained wind speed of 170-180 kmph gusting to 200 kmph," it said. All precautionary measures like flight cancellation at airports, cancellation of trains and water transport services have been taken.

#CycloneFani has hit #Cuttack severely. Lots of trees are uprooted. @DCP_CUTTACK and ODRAF unit as per the guidance of @DGPOdisha is putting all the possible efforts to ensure the roads are cleared asap. #DutyAboveElse pic.twitter.com/eNl1HwENEy

Cyclone Fani is expected to weaken in next three hours with a wind speed of 150-160 km per hour, subsequently, it will weaken and move north-northeastwards, said Mrityunjay Mohapatra, IMD, Delhi, to ANI. By evening, it may weaken into a severe cyclonic storm over the extreme northern part of Odisha.