Fani is expected to hit the Odisha coast south of Puri and is likely to impact coastal districts like Ganjam, Gajapati, Khurda, Puri, and Jagatsinghpur, Kendrapada, Bhadrak, Jajpur, and Balasore, it said.

Cyclonic storm 'Fani' is expected to make landfall in Odisha on May 3 afternoon with wind speeds ranging up to 180 km per hour causing heavy rainfall in the coastal districts of the state, the India Meteorological Department (IMD) said on Wednesday.

Fani is expected to hit the Odisha coast south of Puri and is likely to impact coastal districts like Ganjam, Gajapati, Khurda, Puri, and Jagatsinghpur, Kendrapada, Bhadrak, Jajpur, and Balasore, it said.
In West Bengal, districts of East and West Medinipur, South and North 24 Parganas, Howrah, Hooghly, Jhargram, and Kolkata along with Srikakulam, Vijayanagram and Visakhapatnam districts of Andhra Pradesh are likely to be affected, the IMD added. 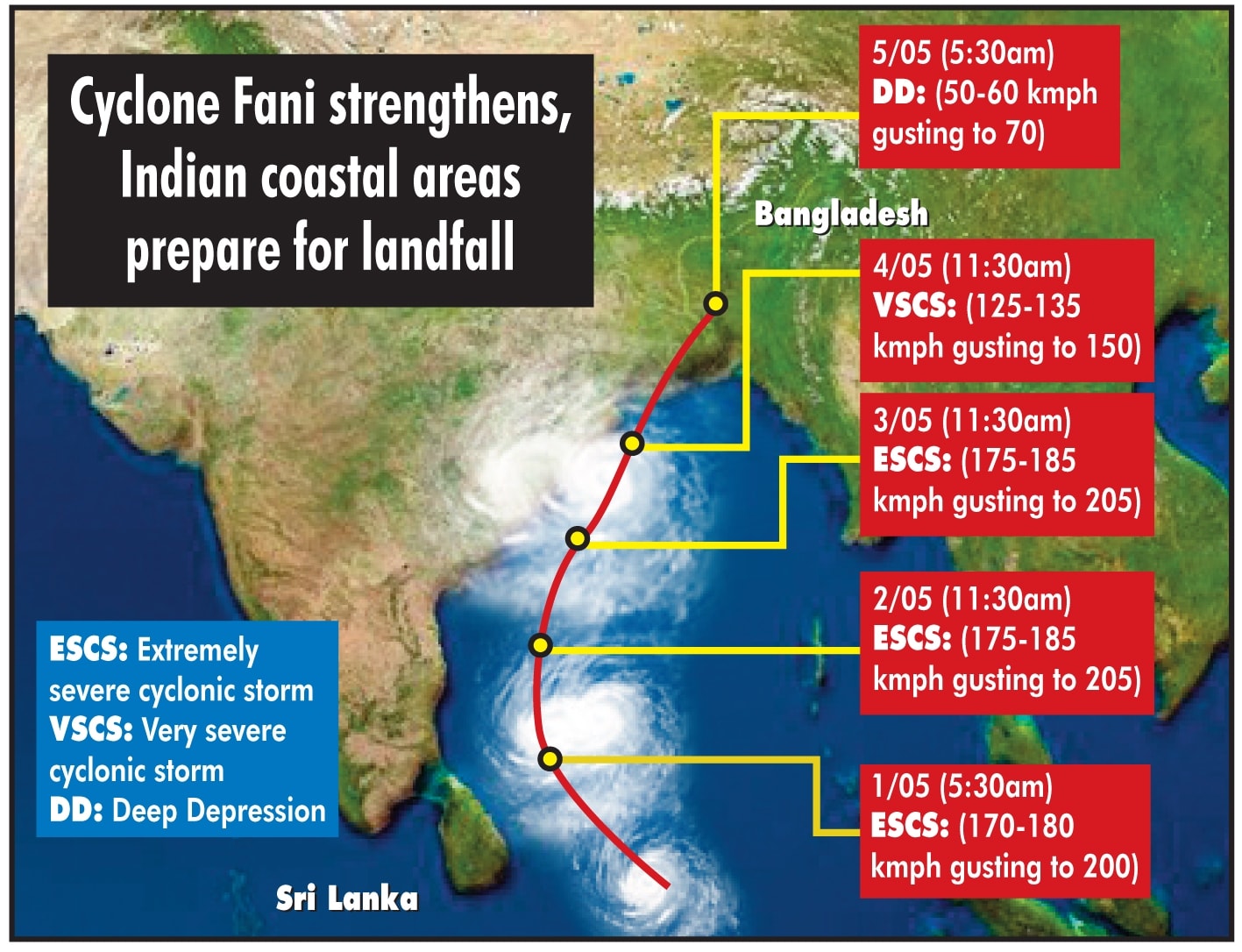 Infographics: Cyclone Fani strengthens, Indian coastal areas prepare for landfall. (IANS Infographics)
The IMD also warned of a storm surge of about 1.5 meters height which may inundate low- lying coastal areas of Odisha's Ganjam, Khurda, Puri and Jagatsinghpur districts at the time of landfall.
Cabinet Secretary PK Sinha held a National Crisis Management Committee (NCMC) meeting again on Wednesday and reviewed the preparedness of states and Central ministries and agencies concerned to deal with the situation arising out of the extremely severe cyclonic storm 'Fani', a Home Ministry statement said.
See Pictures: Odisha prepares for Cyclone Fani; NDRF, Navy, Coast Guard on high alert ahead of May 3 landfall
He directed that all necessary measures be taken to complete evacuation of people from areas in the cyclone's path and maintain adequate quantities of essential supplies such as food, drinking water, and medicines.
Odisha informed that around 900 cyclone shelters have been made ready to house the evacuees and requested two helicopters to be stationed in the state for emergency food distribution.
The Cabinet Secretary directed the Ministry of Defence to meet the requirements of Odisha government, and once again advised all concerned to make adequate preparations to ensure the maintenance of essential services such as power and telecommunications in the event of damages caused to them.
"Railways, Civil Aviation, and Shipping Ministries were advised to review their preparedness well in time and ensure the quick resumption of their services in the event of any disruption," an official statement said.
The Indian Coast Guard and the Navy have deployed ships and helicopters for relief and rescue operations.
"Army and Air Force units have also been put on standby in Andhra Pradesh, Odisha, and West Bengal. The National Disaster Response Force (NDRF) has deployed 12 teams in Andhra Pradesh, 28 teams in Odisha and six teams in West Bengal. Additionally, 32 teams have been kept on standby. The teams are equipped with boats, tree cutters, telecom equipment," the statement said.
States have issued advisories and are ensuring that fishermen do not venture into the sea, said the statement, adding the IMD has been issuing three hourly bulletins with the latest forecast to all the states concerned and the Ministry of Home Affairs is also in continuous touch with the state governments and the Central agencies concerned.
Chief Secretaries, Principal Secretaries of Andhra Pradesh, Odisha and West Bengal participated in the NCMC meeting through video conference. Senior Officers from the Ministries of Home Affairs, Shipping, Civil Aviation, Railways, Fisheries, Power, Telecommunications, Defence, Drinking Water and Sanitation, Food Processing, Health, the IMD, the NDMA, and the NDRF also attended the meeting.
The NCMC will meet again on Thursday to take stock of the emerging situation, the statement added.
Check out our in-depth Market Coverage, Business News & get real-time Stock Market Updates on CNBC-TV18. Also, Watch our channels CNBC-TV18, CNBC Awaaz and CNBC Bajar Live on-the-go!