In the last 20 years, India has witnessed 4 'downturns', however, the current slowdown seems to be the most protracted and severe both in terms of time and its spread, said a report by Centrum Broking. The impact on both rural and urban demand in this slowdown has been unprecedented.

In the last 20 years, India has seen four phases of a downturn in the economy but the current slowdown seems to be the most protracted and severe both in terms of time and its spread, said a report by Centrum Broking. The impact on both rural and urban demand in this slowdown has been unprecedented, it said.

These downturns are Agrarian crisis due to severe drought and Gujarat earthquake of 2002-03, the global financial crisis of 2008, higher inflation and the commencement of 'taper tantrum' in 2012-2013.
While all the past three downturns have been either due to exposure of heightened external vulnerabilities or natural calamities, the ongoing slowdown seems to be self-inflicted on account of 3 successive shocks in 3 years in the form of demonetization, rolling out of GST in not so phased manner coupled with the blowout of NBFC crisis. 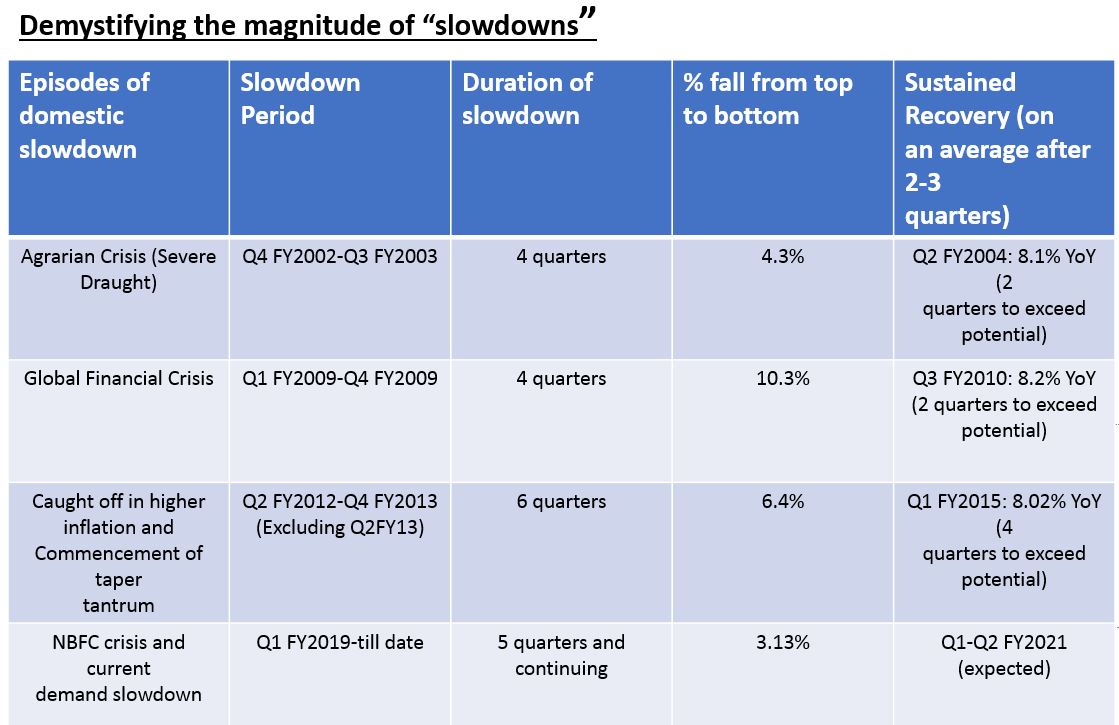 The study by Centrum Broking suggests that no downturn has reversed without government intervention. However, the magnitude of intervention varies given the severity of the downturn and the government’s ability to utilize the fiscal space. It also revealed that it takes on an average 2-3 quarters for an economy to normalize once government intervention starts,
Hence, the brokerage believes that the September quarter may be the bottom of the slowdown and expects growth to rebound to normalized levels in Q1FY21-Q2FY21.
What should investors do?
Accordingly in their strategy, they advocate that though the worst seems to be behind us, this is going to be a slow ride towards the path of normalisation. Given the current government has a political mandate and has acknowledged the slowdown, it will continuously intervene to bring the economy back on track, as evident from the recent announcement of lowering corporate tax rates, the brokerage noted.
In this background, they recommend reducing cash gradually and look for value investing. In the next few quarters, there will be a lot of false starts, giving an opportunity to invest, they explain.
They further advocate moving away from the defensive portfolios and increase weightage to rate cyclicals like corporate banks, auto, etc. Hence, they are underweight in both IT and metals, neutral in pharma and telecom.
The various 'downturns'
Agrarian Crisis: Lower farm incomes weighed heavily on rural consumption growth and muted government expenditure weighed on total economic activity. However, private investments and exporting activity remained intact and provided cushion to the GDP growth.
As 2004 delivered surplus rains, agro activities gathered momentum, efforts by RBI and government along with better monsoon aided consumption. Lower rates and higher capex helped in accelerating investment and GDP rebounded sharply as all attributes showed signs of recovery.
Global Financial Crisis: In 2008, world GDP contracted on account of the international banking crisis. The plunge in world exports contracted external demand and disrupted business sentiments too and real GDP growth witnessed the steepest slump.
The decline in growth in agriculture and industry, however, was more prominent compared to services. Slumping urban and rural demand contracted private consumption but services did not decelerate much and thus limited downside.
To curb this, the government opted for aggressive fiscal policy in order to reverse the downturn and the RBI lowered repo rate by 400 basis points over a period of 7 months. After this, the sharp rebound was seen in FY2010 on account of fiscal and monetary expansion. With the recovery in credit demand, investment activity accelerated and Industrial production also recovered sharply.
Taper Tantrum: Later, domestic headwinds coupled with global headwinds constrained output growth in FY12 and FY13. Elevated global oil prices kept the inflationary pressures intact, while the global uncertainty on account of the Euro-Zone debt crisis impacted exports. Excessive monetary tightening also weighed heavily on private investments. Industrial slowdown and dampened demand weighed on services too during this period, and agri growth decelerated below trend due to deficient monsoon.
While the heightened inflationary pressures did not give abundant room to RBI and the government to expand policy, the government calibrated fiscal deficit of FY13 to limit the impact on inflation RBI undertook calibrated monetary easing and reduced rates by 100 bps. Later, mild economic recovery in FY14 was largely on account of moderating inflationary pressures.
Rebound happened on the back of a normal monsoon, supported agri growth while the export growth also improved due to Rupee depreciation
Check out our in-depth Market Coverage, Business News & get real-time Stock Market Updates on CNBC-TV18. Also, Watch our channels CNBC-TV18, CNBC Awaaz and CNBC Bajar Live on-the-go!