The one thing that is constant across all markets in India is customers asking for free dhaniya and mirchi (coriander leaves and green chilli) while buying vegetables in bulk, according to customers, this has now become an issue.“I also know the prices are so high so I myself have stopped asking it for free because then it gets into a whole debate with the vendor and it gets embarrassing,” said 34-year-old, Pushpa Chouhan a resident from Block A, Noida, Uttar Pradesh.

“Aajkal free main paani nahi milta, aur aapko ye Rs 160/200 per kilo ka dhaniya chaiye (people don’t even give water for free, and you want Rs 160/200 per kg green coriander)?", quipped Shankar Chowdhury, a local vegetable vendor, in Noida's Sector 34 in Uttar Pradesh.
The price of the most used herb in Indian kitchens has skyrocketed this summer. Chowdhury, who sources his vegetables from the Azadpur Sabzi Mandi in Delhi, said that in September, the wholesale price at the mandi ranged from Rs 100-120 per kg.
According to data by Commodity online and Commodity insights (websites to check mandi price), coriander leaves are currently selling at an average price of Rs 8,000 per quintal (Rs 80 per kg) at the Azadpur Mandi. The prices have been skyrocketing since March due to the uneven monsoon (heavy monsoon in Rajasthan, the country's largest coriander producer) and low production.
Last year in July, the spot prices for coriander in Kota (the biggest market for coriander in India) stood at Rs 6,000 per quintal, while this year, the prices touched Rs 10,000 per quintal, according to data by Agriwatch.
This year at Kota Mandi, total coriander supply from March 1 to August 19 was reported at 6,724 MT compared to 7,500 MT during the same period last year, down by 10.35 percent in the wake of lower production, as per a report by Agriwatch. (1MT =10 quintal)
According to official data by the Spices Board of India, the area per hectare for sowing coriander for 2021-2022 is estimated to be 6,31,698 hectares while the production is estimated to be at 8,00,742 tonnes. The production this year is estimated to go down by 10.3 percent. 'Embarrassed to ask for free dhaniya'
For many Indians, especially those from the north, vegetable shopping ends with vendors pushing a handful of free and fresh coriander bunches and chillies in bags as a 'bonus'. But this summer, this was rare.
“The herb is so costly these days, I have stopped asking for free dhaniya. If you do, you will have to get into a debate with the vendor, and it gets embarrassing,” said 34-year-old Pushpa Chouhan, a Noida resident.
Many vendors pointed out that since May, they stopped giving coriander leaves as the buying rate from mandi increased.
“In February-March, I used to give a bundle for free when people bought vegetables in bulk, as it was at Rs 20-30 per kilo. Now, if they ask, I just give 2 or 3 strands as it feels weird to say no to the customer,” said Santosh Kumar Jaiswal, another vendor in Noida.
According to Shivraj Singh Dhakkad, a wholesale trader from Guna, Madhya Pradesh, the mandi has not received much supply from farmers and the markets in Rajasthan, resulting in the price going up.
How much are the farmers getting?
“I am getting Rs 60-80 per kg from the mandi. The maximum this summer was Rs 100,” said Richa Singh, owner of Bheemraj Farms, Jaipur.
Singh said the difference in what the farmer gets, what mandi sells, and what the retail price stands at comes because of losses incurred by mandi sellers and retail owners as coriander is a perishable crop and needs to be sold within a maximum of a week on buying.
Coriander is grown as a Rabi season crop in the north and central parts of India, with sowing being done between the middle of October and the middle of November. It takes approximately 100 days for maturity, though harvesting for green leaves starts earlier. So, usually, during summer, crop production goes low.
“This year due to late monsoon and also heavy monsoon in Rajasthan not only damaged the crop but also caused problems with transportation which was also aided by a hike in petrol and diesel prices causing the spike in prices,” said Jain. 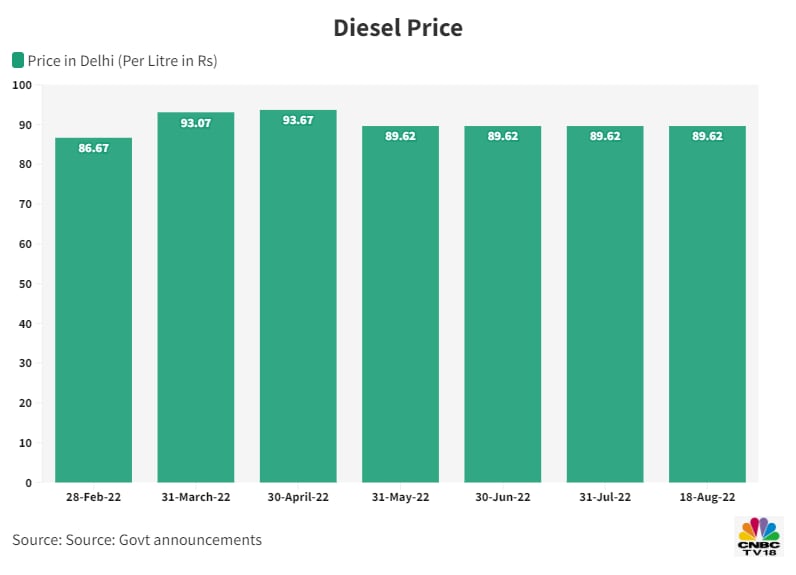 Can consumers expect prices to go down?
According to experts, the prices will come down soon with the monsoon going away. “We have already seen them going down in different parts. It has started to swing between Rs 60 and Rs 100 per kg in Rajasthan. So, with monsoon going away, prices will go down,” added Jain.
As coriander is also used for producing and retailing dry coriander seeds and powder, we have seen the prices in total surge due to monsoon, shortage of the commodity, and international demand. "Still, it will start correcting from the highs now," said agri commodities expert Manoj Kumar Jain.
Jain said prices are expected to go down as there is a possibility that sowing will increase.
Check out our in-depth Market Coverage, Business News & get real-time Stock Market Updates on CNBC-TV18. Also, Watch our channels CNBC-TV18, CNBC Awaaz and CNBC Bajar Live on-the-go!