Updated : October 02, 2019 04:37 PM IST
A popular tourist destination, the hill town of Coonoor in the Nilgiris, was suffering due to garbage blocking its streams and rivers.
Early European travellers have commented on the fresh and sparkling waters of the streams in this hill town. In the recent years, encroachments and the garbage had nearly killed the feeder streams that flow into the Coonoor river, reducing them to sewers.
Concerted action by Coonoor citizens, with support from the district administration, has helped in cleaning the waterways and maintaining them.

On September 22, the World Rivers Day, Clean Coonoor, a local NGO, started the second phase of the Coonoor River clean-up drive. Coonoor is a small town of around 45,494 people in the Nilgiri mountains in the state of Tamil Nadu in southern India.

The Coonoor River flows out of the town between two hills, Bazaar Hill and Mission Hill. Like other rivers in India, over the years it has become more like a sewer with most of the town’s sewage being dumped into it. Four feeder streams drain into the river at various points.

It has however, not been always like this. Early European travellers to the Nilgiris have commented on the fresh and sparkling waters of the streams in this hill town. However, the past 60 years have seen the water sources in this hill town being compromised due to a number of reasons: tea plantations, unauthorised buildings, overcrowding and unplanned urban development.

In recent times, Coonoor has been prone to severe water shortage despite the town having access to numerous water sources. The drinking water supply comes from Raliah Dam and the streams, including tributaries of the Coonoor River, in its upper reaches. A survey undertaken by the Kotagiri-based NGO, Keystone Foundation, states that Coonoor has been blessed with a large number of wetlands and more than 75 perennial streams.

The Nilgiris district benefits from both the monsoons, with Ooty (official name Udhagamandalam) and Gudalur getting more rains during the southwest monsoons and Coonoor getting rains during the northeast monsoon between October and December. In August this year, Avalanche, a tourist hotspot 24 km from Ooty, received 820 mm of rain on a single day, the first time in 76 years, and Coonoor received some scattered rainfall during this period. So, there can be no reason for a water crisis.

That the Coonoor River is polluted is a known fact. Residents shrug their shoulders and go about their way without a glance at the sluggish rill that meanders through the bazaar carrying its load of garbage. In some parts of the town, even the blood and gore from slaughterhouses are let into the stream.

A report filed first in The Hindu Business line on June 23, 2017 quotes a World Wildlife Fund India (WWF) report: “Coonoor town discharges five MLD of untreated sewage into the Kallar River, which flows down to Mettupalayam. The WWF study also found the presence of coliform bacteria 14 times higher than the CPCB (Central Pollution Control Board) norms.”

Prompted by this report and the water crisis, Clean Coonoor began addressing the problem. In June this year, they silted and cleared the river off pollutants. Earlier, the NGO had cleaned the culverts and started replanting native grass varieties in the wetland in an attempt to revive it. 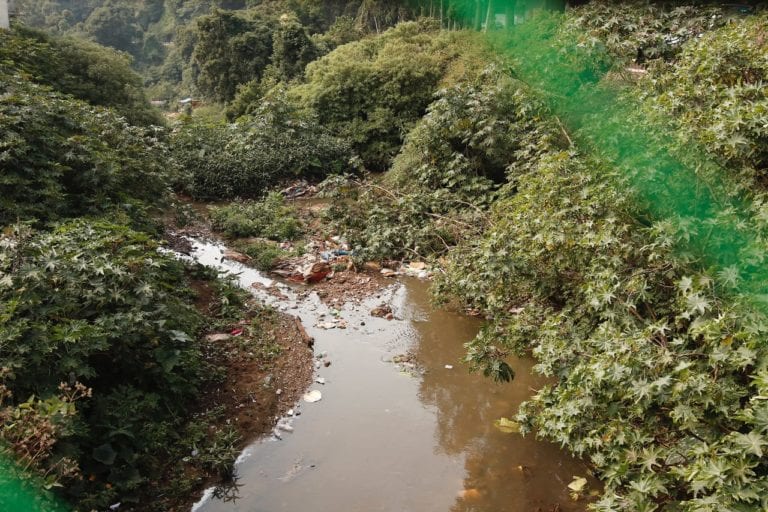 A Coonoor stream blocked with debris and garbage before clean up. Photo from Clean Coonoor.

Vasanthan Panchavarnam, a trustee of Clean Coonoor, said, “Coonoor town is drained by four perennial streams. The Hancoonthorai aka Ganguathorai, which flows through the Wellington Cantonment below Black Bridge, separates East and West Coonoor. This is the upper stream. The second or the middle stream is the one that flows through the Gorethorai region between Mission Hill and Bazaar Hill. The third is the Gondekambaithorai or the lower stream which flows between Tiger’s Hill and the ridge through which passes one of the arterial roads of the Coonoor-Barlows Road. The fourth stream, Araihalla, drains Reilly’s Compound, a middleclass residential locality, and Mission Hill. Sadly, this stream is now nothing more than a glorified gutter that empties its refuse into the lower stream.”

For most of the year, the river winds its way listlessly through the town carrying its contaminated burden. Then, once in a long while, it floods, as it did in March 2015, at the tail end of the northeast monsoon. Due to this heavy downpour, the middle stream washed away a number of vehicles in lower Coonoor in the early hours of the morning. The report stated that Coonoor had recorded 88 mm of rainfall in three hours that day.

According to Dr Vasanthan, the stream that flows by the side of VP Street (a crowded part of the town) flooded because of the encroachments on it. He said, “This stream which is supposed to be 50-feet wide, is now just 12-feet wide at a number of places. And there are low foot bridges which choke up when the water flow increases.”

This feeder stream has a number of encroachments, including buildings, municipal toilets and household sewage draining into it, and was the first one that Clean Coonoor cleaned at a cost of Rs 1.5 million. The funds for cleaning the stream came from a Hyderabad-based philanthropist.

It took 42 days of hard labour to clear 12 tonnes of soil, plastic and other debris, including an auto rickshaw and a couple of sofas, in the stream. On the crowded VP Street, which is usually choc-a-bloc with lorries unloading produce for the market, the mud and debris could not be carted away during the day. So, volunteers worked during the night, sometimes till dawn, standing in the water, braving the chill of the night. Many shopkeepers were cooperative, helping in traffic management, and supplying tea to volunteers.

Samantha Iyanna, managing trustee of Clean Coonoor, said they had worked along with the local administration and the municipality on this project, and expected to do so in future projects as well, to work out viable solutions. She said the cleaning of the river and its tributaries would be undertaken in a phased manner, and that the operations were expected to be carried out over a period of two years.

The District Collector of Nilgiris, Ms J. Innocent Divya, told Mongabay India that the government had plans to set up a sewage treatment plant at a cost of Rs 5 crore to serve Coonoor. The local administration is awaiting technical sanction for the plant. Asked about the encroachments on the river, the Collector said she would be looking into it.

Another problem in Coonoor is the municipal solid waste dump on Ottopattari hilltop. For the past six decades, the municipality has been dumping garbage here. The residents in the area have been complaining about the smell emanating from the dump to no avail. Early this year, the National Green Tribunal expert team visited Udhagamandalam and directed the municipality to close down the garbage dump there. Perhaps taking a cue from this, the Coonoor Municipality along with Clean Coonoor decided to clean up the dump and levelled off the mounds of rotting garbage and covered it with the 8,000 tonnes of soil salvaged from the river clean-up drive.

Vasanthan said the major problem was the plastic that had been dumped along with the wet waste. The plastic melts, ignites and smoulders because of the heat and the methane gas generated during decomposition of the organic detritus, letting off carbon monoxide, dioxins and furans into the atmosphere. These gases are toxic and injurious to health.

Earlier, the garbage used to be composted and sold to the estates, said J. Raghunathan, the Municipal Health Officer. However, this has not been possible in the past decades with excessive amounts of plastic getting accumulated in the garbage.

Today, thanks to the plastic ban in the district, the quantity of plastic being disposed has come down drastically. Since single-use mineral water bottles form the bulk of the plastic garbage, the district administration has installed drinking water dispensers to discourage people from using bottled water.

According to Raghunathan, Coonoor town generates 14 tonnes of waste a day. Of this, 5.6 tonnes are dry waste and the rest wet waste. The dry waste is sold to local retailers by the conservancy workers, which serves as an incentive for them.

Recently, the Hyderabad-based NGO, Gandipet Welfare Society, donated a plastic baler to Clean Coonoor, which was then loaned to the Coonoor Municipality to recycle plastic waste. Vasanthan said the plastic baling machine had the capacity to compact about 200 kg of plastic into 1.5 cu m blocks. These blocks can then be used for other purposes.

The Coonoor Municipality already has micro composting centres up and running around the town to deal with the wet waste.

The municipality has instructed households to segregate garbage. Vasanthan said that the wet garbage was once again being composted. The waste from fish and chicken does not decompose easily, so as a temporary measure, this is being put into a pit till a better and more viable solution can be found.

Taking a step further, the Nilgiri District Administration has issued an order that power and water supply would be cut to households that do not segregate their garbage even after three warnings. The municipality has erected a tall wire mesh netting to prevent people from throwing garbage into the river and this has had its effect: the amount of garbage being dumped into the river has come down considerably.