Compromise? Time ticking down for Britain to come to Brexit agreement

Compromise? Time ticking down for Britain to come to Brexit agreement 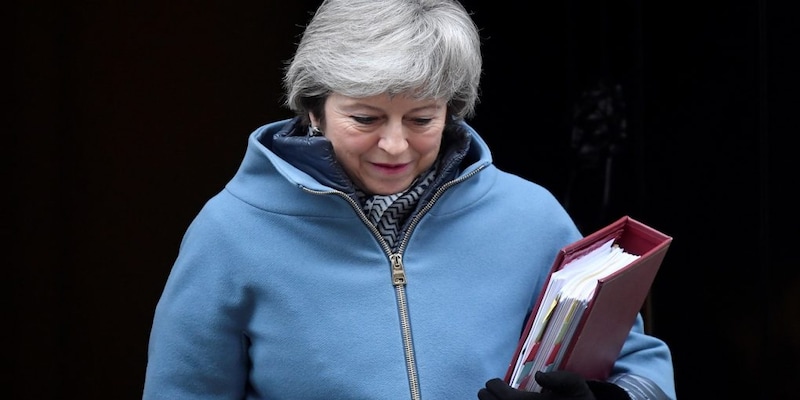 Prime Minister Theresa May, weaker than ever after her Brexit deal was rejected by parliament three times, made another appeal to the public to explain why she turned to Labour leader Jeremy Corbyn after giving up on winning over eurosceptics in her Conservative Party, whose opposition has hardened.

Britain's government held out the possibility of compromise with the opposition Labour Party on Sunday to try to win support in parliament for leaving the European Union with a deal, just days before the latest Brexit date.

Prime Minister Theresa May, weaker than ever after her Brexit deal was rejected by parliament three times, made another appeal to the public to explain why she turned to Labour leader Jeremy Corbyn after giving up on winning over eurosceptics in her Conservative Party, whose opposition has hardened.
With Britain's departure now set for April 12, May's government is running out of time to get a deal through a divided parliament and must come up with a new plan to secure another delay from EU leaders at a summit on Wednesday.
Britain's biggest shift in foreign and trade policy in more than 40 years is mired in uncertainty, with ministers saying Brexit may never happen, businesses worried the country could leave without a deal, and others just wanting to reverse it.
In a last-ditch bid to get her deal through parliament, May opened talks with Corbyn last week to try to strike a deal on Britain's future ties with the EU in exchange for his support for her divorce deal, the Withdrawal Agreement.
So far those talks have failed to yield any kind of accord, with Labour policy chiefs saying the government has yet to move from its "red lines", above all over a customs union, which sets tariffs for goods imported into the EU.
"Specifically provided we are leaving the European Union then it is important that we compromise, that's what this is about and it is through gritted teeth," said Andrea Leadsom, the Brexit-supporting Leader of the House of Commons, parliament's lower house.
"But nevertheless the most important thing is to actually leave the EU," she told the BBC's Andrew Marr show, adding that May's proposal for a customs arrangement after Brexit was not too far from Labour's desire for a customs union.
Germany's finance minister, Olaf Scholz, called on the two sides to find what he called "a sensible agreement to end the paralysis in British politics and to avoid a disorderly Brexit".
No Real Change
But, while describing the talks so far as positive, Labour's business policy chief Rebecca Long-Bailey said there had as yet been no "real changes" to the deal.
"I think both sides are committed to working quite rigorously to compromise as much as possible so that we can provide that compromise Brexit deal that I think parliament desperately needs at the moment," she told the BBC.
Shami Chakrabarti, Labour's legal policy chief, was more blunt. "It's hard to imagine that we are going to make real progress now without either a general election or a second referendum on any deal she can get over the line in parliament," she told Sky News.
May has opposed remaining in the EU's customs union saying it would mean that Britain could not secure free trade deals with other countries -- a key plank to her Brexit strategy that saw her create a new government department for trade.
"I think, the government thinks, we absolutely must leave the European Union ... that means we need to get a deal over the line," May said in a new video, explaining why she was now pursuing cross-party talks.
Britain voted by 52 to 48 percent in 2016 to leave the EU, and parliament, May's cabinet and the country at large remain deeply polarised over the terms of Brexit and even whether to depart at all.
Despite the lack of convergence between the two major parties over a deal, there was one thing they did agree on -- time is running out for Brexit to be secured.
May, who has been verbally mauled by members of her own party for turning to Labour, herself warned Brexit-supporting lawmakers that "the longer this takes, the greater the risk of the UK never leaving at all".
In an attempt to avoid falling out of the EU without a deal, she again heads to Brussels this week to ask for a further delay until June 30 -- something EU leaders have said requires her setting out an alternative path to getting her deal approved.
Any extension would require unanimous approval from the other EU countries, all weary of Britain's Brexit indecision, and could come with conditions. EU summit chair Donald Tusk plans to propose an extension of a year, which could be shortened if Britain's parliament eventually ratifies the deal.
But even the threat of losing Brexit has so far failed to change the minds of hardline eurosceptic Conservative lawmakers, and some are now suggesting that Britain make the EU's life a misery if Britain is forced to accept a long delay.
"If we are forced to remain in we must be the most difficult member possible," Jacob Rees-Mogg, leader of the European Research Group, a Conservative eurosceptic group, told Sky News.
"When the multi-annual financial framework comes forward, if we're still in, this is our one in seven-year opportunity to veto the budget and to be really very difficult."
Check out our in-depth Market Coverage, Business News & get real-time Stock Market Updates on CNBC-TV18. Also, Watch our channels CNBC-TV18, CNBC Awaaz and CNBC Bajar Live on-the-go!