Community farming in Goa emerges as a tool against land conversion

Community farming in Goa emerges as a tool against land conversion

Father George Quadros hit upon the idea of collective farming almost by accident. As an amateur farmer, he has been dabbling in various cultivation methods since 1986 at southern Goa’s Don Bosco Loutolim Society (DBLS). A votary of farm mechanisation, Quadros realised that although the use of machines reduced costs and boosted yields, the cost of machinery was too high for smallholder farmers.

“The collective farming concept started because the machinery is costly, but is economical over large areas,” said the 63-year-old Catholic Salesian priest. “Farmers have to come together if it has to work.”
There was a breakthrough in November 2015, when Quadros deployed Japanese-made rice nursery and transplanting machines on 3,000 sq. metres of paddy fields in Velsao village through an initiative of DBLS called Goa Paddy. The trial saw costs shrinking, and the harvest was plentiful.
Enthused by the success, Quadros convinced farmers in several villages in the vicinity to try out co-operative paddy cultivation. During the 2016 Kharif (summer) cultivation season, collective mechanised farming was put into practice in Loutolim (15,000 sq. m), Curtorim-Maina (20,000 sq. m), Cavelossim (20,000 sq. m), and Carmona (40,000 sq. m) villages.
The success of Velsao in the previous winter cropping season was repeated in these villages. Since then, Goa Paddy has been working as a service provider to collective paddy farming efforts in many other villages in south Goa. “We move in clusters,” said Quadros. “We appoint one person in each village to speak to farmers and get them together. Bookings are taken in February-March.”
By 2018, Velsao had 80,000 sq. m, Loutolim 250,000 sq. m, Curtorim-Maina 300,000 sq. m, and Carmona 200,000 sq. m under collective paddy farming. Today, with two machines, DBLS’s nursery is capable of providing seed nursery preparation and transplanting services for 150 hectares every season. Father George Quadros on a paddy-transplanting machine. Photo courtesy goapaddy.com.
Decline in paddy cultivation
Goa has seen a decline in paddy cultivation in recent years because farmers and landowners have been reluctant to practice the conventional, labour-intensive method of raising nurseries and transplantation. The fall has been exacerbated in the past 10 years due to prohibitively high labour costs and manpower shortages.
Rice production in Goa has risen to 113,227 tonnes in 2016-17 from 71,070 tonnes in 1987-88, according to the state’s Directorate of Planning, Statistics and Evaluation. However, land under paddy cultivation has reduced significantly to 31,000 ha today from 50,302 ha in 1961, official data from Goa’s Directorate of Agriculture show.
This has led to large parcels of arable land lying fallow, which have in recent years become prime targets of real estate developers. Building activity on farmland is seen as a danger to biodiversity in a state where an aware citizenry has been protesting environmentally destructive activities such as mining, coastal development and irresponsible building construction. Co-operative farming is being seen as a way to stymie the rapid conversion of farmland. 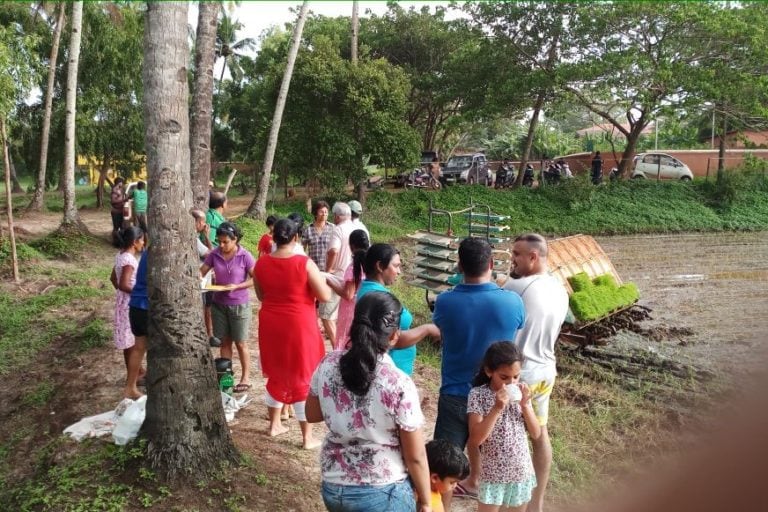 Mechanical transplanting underway in Cansaulim village in south Goa. Photo courtesy goapaddy.com.
The state government has woken up to the problem as well. In a recent address, Goa Chief Minister Pramod Sawant has underscored his government’s shift towards reviving the state’s agriculture sector. “During the Portuguese era, Goa’s economy was entirely dependent on agriculture, which was later replaced with other activities,” he said in the month of May this year. “Now, the youth should take up agriculture using all the incentives available with the state government.”
Sawant has exhorted the youth to take advantage of subsidies for community farming and revive primary sector occupations like farming, pisciculture and dairying. These are options, at a time of rising unemployment and disenchantment, due to the grounding of mining activity and the downswing in tourism, the two key sectors of Goa’s economy.
The state’s agriculture department in October 2018 floated a scheme that promised 90% subsidies for community farming, where more than 10 farmers pooled their land. In the current Kharif season, four farming clubs have registered for the scheme.
However, before the government subsidies, a collective farming movement has been building up from the ground, leaving the agricultural bureaucracy to follow the lead given by citizens. The government’s 2017-18 Economic Survey Report acknowledges this.
“The tendency to keep fertile paddy fields fallow needs to be vigorously fought. The Sao Paulo Farmers Club, Nachinola, Bardez Goa has shown the way by getting even disinterested landowners involved,” the report stated. “It has taken up land preparation, mechanized paddy transplanting, mechanized weeding and combine harvesting collectively for the entire block of 4.00 ha in the possession of 31 members. Half of this area was under organic cultivation. A small beginning to market paddy after milling by direct sale has been made. It may be difficult to replicate this mode of farming everywhere. Hence, the concept of ‘Community Farming’ is being promoted.”
Experiments to revive Goa’s rice fields
In 2018, threatened by plans for a coal transportation carriageway and the hunger for real estate development, the northern Goa island village of St. Estevem adapted the DBLS experiment to their village’s fallow fields. In a show of unity and community spirit, the Ilha Verde Farmers Club pooled some 450,000 (4.5 lakh) sq. m of fallow rice fields, utilised machines of DBLS, and harvested a bumper 75,000 kg of rice in the Kharif season. This was despite losing 30 percent of the crop due to natural causes and beginner’s mistakes.
This year, riding on its spectacular success and considerable media spotlight, the Ilha Verde Farmers Club has doubled its target area, and has plans to grow rice on 1 million sq. m of land. “The St. Estevam experiment has given the entire agricultural sector in Goa hope that mechanisation, land pooling, community farming and social marketing can work and make Goa’s rice fields a working reality once again,” said former agricultural officer Miguel Braganza.
“St. Estevam succeeded because the people were united. They saw their village, land and way of life threatened by a coal corridor and encroaching builder interests, and decided that it was better to utilise fallow fields than be sitting ducks for a takeover,” said Club President Nestor Rangel (51), an electrical engineer-turned-farmer. “That was the impetus.” Rice nursery mats await transplantation at St Estevam Island, Goa, in 2019. Photo by Pamela D’Mello.
The St. Estevam community decided to follow organic methods to cultivate and then husk the paddy into brown rice, which has seen a revival in demand in the state and has a robust overseas market. The club’s social marketing is a huge success, and the brown rice has found many takers across the globe, said Club member Ansyl Gonsalves (23).
Despite the successes, spreading community farming is not without its hurdles. “I held a few meetings with farmers in Santa Cruz village, where I reside,” said Rangel. “But I wasn’t able to succeed there.” The value of land in Santa Cruz, which adjoins state capital Panjim, is so high that it is far more lucrative for tenant farmers to let fields lie fallow, which are then surreptitiously swallowed by land sharks. “People want to sell their fields,” said Rangel. “Everyday, you will find people dumping mud and debris to fill up their fields and convert them.”
“Under Section 36 of the Agricultural Land Tenancy Act, the government is supposed to survey and take over management of fields not cultivated for three years. But that is never done,” said Tulio de Souza, President of the Guirim Comunidade. “If we want to revive the rice planting fields, the government has to use both a carrot and stick approach. Provide subsidies, but hold out a threat that fallow fields will not be permitted.”
The Comunidades of Goa are a form of land association where ownership was held collectively. Comunidades like Guirim owned vast swathes of fields, cashew hillside plantations and pasture land, but lost 70% of the land to tenants when the Tenancy Act came into force in 1965. Quite a few tenant tillers gave up farming once they got a stake in the land. This year, de Souza is making attempts to bring tenanted fields in Guirim under community cultivation. Community rice cultivation revival in Verna village in south Goa. Photo courtest goapaddy.com
A major challenge co-operative farming faces in Goa is that there is not enough farming machinery. The Don Bosco nursery runs two, and two of it’s former trainees now run a machine each with a capacity of 60 ha a season each. “Other southern India states have 50-100 machines up and running. They are way ahead. Goa needs at least 70 such service providers for the sector to completely revive,” said Quadros. “The sooner this happens, the happier I will be to retire.”
There is also a shortage of service providers for transplanting and seeding. Some communities are hiring service providers from the neighbouring state of Karnataka but that’s not a long-term solution. The St. Estevam community has hired Karnataka-based Surya Agri Solution this year. The village council of Bastora in northern Goa had hired a service provider from Karnataka in 2018. “Initially, 20 farmers banded together, with fields ranging from 1000-3000 sq. m,” said Bhiva Bagkar, a village resident. “We did well, so this year more have joined us.”
Retired corporate employee Andrew D’Souza brought his family fields under cultivation this June after a gap of six years. “Mechanisation brings the cost down by a third,” he said. However, mechanisation has progressed sporadically in the state, with success localised to few farming clubs and areas. This needs to change for mechanised community farming to take firmer root in Goa.
(This story was first published on Mongabay)
Check out our in-depth Market Coverage, Business News & get real-time Stock Market Updates on CNBC-TV18. Also, Watch our channels CNBC-TV18, CNBC Awaaz and CNBC Bajar Live on-the-go!