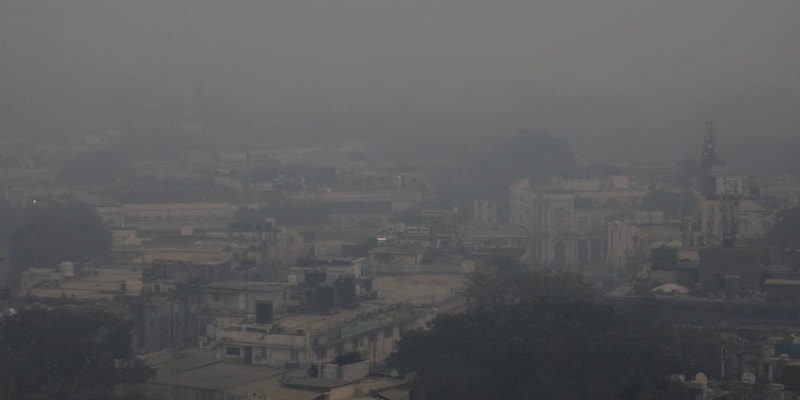 With persistent cold conditions and moist westerly winds, the air quality in Delhi moved slightly towards the upper level of the 'very poor' category with overall Air Quality Index (AQI) recorded at 322.

It was a misty morning for the national capital on Wednesday with cold winds keeping the minimum temperature at 8 degrees Celsius, a notch above the season's average.

"There was shallow to moderate fog in the morning; however, the sky got cleared soon and will remain that way until sunset after which haze or smoke will cover the sky," an India Meteorological Department (IMD) official said.
With persistent cold conditions and moist westerly winds, the air quality in Delhi moved slightly towards the upper level of the 'very poor' category with overall Air Quality Index (AQI) recorded at 322.
The humidity at 8.30 a.m on Wednesday was recorded at 97 per cent - a highly unfavourable condition for pollutants to disperse. The maximum temperature was recorded at 19.7 degree Celsius.
"Although the wind speed is moderate, moisture in the air and persistent cool conditions are holding the pollutants close to the ground," System of Air Quality and Weather Forecasting And Research said.
The agency further said that there won't be any immediate relief from the 'very poor' air quality in Delhi and it might further deteriorate a few notches in the next three days.
After the weekend's rainfall, the IMD has again forecast light rainfall or thunderstorm in Delhi during Saturday and Sunday.
The maximum and minimum temperature on Wednesday is expected to hover around 20 degrees Celsius.
On Tuesday, the minimum temperature was recorded at 7 degrees Celsius, the season's average, while the maximum settled at 20 degrees Celsius, a notch above the season's average.
A senior Railways officer said nine trains have been delayed by an average of three hours due to fog. Purshottam Express, Brahmputra Mail, Poorva Express, Sampark Kranti and Mahbodhi Express were among those delayed as a cover of moderate fog enveloped the city.
(With inputs from agencies)
Check out our in-depth Market Coverage, Business News & get real-time Stock Market Updates on CNBC-TV18. Also, Watch our channels CNBC-TV18, CNBC Awaaz and CNBC Bajar Live on-the-go!