Updated : September 23, 2019 04:38 PM IST
India will participate in the global Climate Action Summit on September 23 in New York where the United Nations secretary-general has called for countries to enhance their commitments to reduce greenhouse gas emissions.
Days before the summit, the Indian government in a ‘discussion paper’ stated that it will only aspire to implement its already promised climate actions, citing lack of finance and technology transfer from developed countries.
It emphasised that the goal of net zero emissions by 2050 can be a global aspiration but not something developing countries can commit too as technology and its availability has not progressed to attain it.

As the United Nations secretary-general calls for countries to ramp up climate action, India demands the appeal be matched with climate finance to developing countries.

The UN Climate Action Summit will be held in New York on September 23, 2019, hosted by António Guterres, secretary-general of the United Nations, who has asked leaders to give concrete and realistic plans to intensify action on climate change as emissions around the world continue to rise. Guterres calls for countries to target net-zero emissions by 2050, by enhancing their Nationally Determined Contributions (NDCs) by 2020 in line with reducing greenhouse gas emissions by 45 percent over the next decade.

But India, one of the major players in international climate change negotiations, has stated in a discussion paper on September 17 that at this juncture, it is “not aware about the availability of technology and finance and thus, can only aspire to implement its already promised climate actions and do equally well or better in comparison to economies with similar levels of development.” India had submitted its intended nationally determined contributions (INDCs) to the United Nations Framework Convention on Climate Change (UNFCCC) in 2015. Indian Prime Minister Narendra Modi is scheduled to take part in the summit in New York.

The discussion paper, ‘Climate summit for enhanced action: A financial perspective from India’, was released by Indian government’s finance ministry’s Department of Economic Affairs (DEA) for use by stakeholders during deliberations at the UN Climate Action Summit. The paper said that NDCs are the bedrock of India’s climate actions post-2020 and these indicate India’s “best-effort” while balancing the developmental imperatives of the country. The paper, reflecting India’s position at the climate summit, said that national circumstances demand that the first priority for India is adaptation, being a country highly vulnerable to extreme weather events.

“Climate change impacts are expected to worsen with the passage of time because of the momentum due to present carbon stock continuing to raise the temperature… In short, enhancement of climate actions in the Indian context means more adaptation actions which would further require more resources to enable these actions … India is doing the promised mitigation actions also in mission mode. However, finance still remains the critical issue,” the paper observed.

It held that the worldwide call for stepping up climate action will have to be matched with adequate provision of climate finance to developing countries adding that India is stepping up targets by relying on domestic budgetary resources. “Given this, India will be better placed to consider a mid-term assessment of its actions and suitably recalibrate thorough re-examination and improvement when the global stocktaking takes place in 2023,” said the paper.

Invoking the idea of climate justice which has regularly been the stance of India and other developing nations on climate action at global forums, the paper noted that despite the various climate finance decisions, there are attempts by some developed countries to shrug off even their modest past responsibilities and that “we are very far from the climate finance goals promised under various CoP (Conference of Parties to the United Nations Framework Convention on Climate Change) decisions.”

“For ambitions to be set high, finance should be an integral part of it. Only then, climate justice can be delivered to the poorer countries. Denying the developing countries, their fair share in the atmospheric resource goes against all tenets of equity and the well-established principle of common but differentiated responsibilities,” the paper noted.

The demand of finance and technology transfer to the developing world from the developed world has been one of the most contentious issues at international climate change negotiations. In 2009, at the climate change Conference of Parties at Copenhagen, developed countries had committed to a goal of jointly mobilising $100 billion a year by 2020 to address the needs of developing countries. The COP in Paris in 2015, built on these financial commitments and developed countries intended to “continue their existing collective mobilisation goal through 2025” to support meaningful mitigation action and transparency on implementation. The Agreement also highlighted that prior to 2025, parties would set a new collective goal upwards of the existing annual target of $100 billion. The deliberations for this new goal are expected to be initiated in November 2020 as discussed in the latest climate conference at Katowice in 2018.

However, countries seem to be falling behind on the pace of meeting the collective financial targets. According to the report of the standing committee on finance of UNFCCC (2018), the finance flow from the developed world (in 2016) was “around US$ 38 billion which is less than 40 percent of the US$ 100 billion target of climate finance.”

The DEA’s discussion paper also noted that as per the latest data of Climate Funds Update which reports multilateral climate finance initiatives, the “actual pledges from developed to developing countries for climate finance is around only US$ 30 billion” as of August 2019.

R.R. Rashmi, who works as a senior fellow with The Energy and Resources Institute (TERI), explained that the paper questions the approach of expecting emerging economies or developing countries to make an isolated effort in raising their NDCs without the availability of required resources.

“It has to be a global effort. Mature economies that can make significant contributions need to act together according to their capabilities. But most of the developed countries are not acting in accordance with their capabilities. They have not bothered even to reduce their emissions, let alone provide resources,” Rashmi told Mongabay-India.

“The paper essentially points out the deficiencies in the efforts of the developed countries who have a larger responsibility. When they are not meeting their commitments how will global ambition be raised? The developed world has given very little money to developing nations as part of their commitments – it is peanuts. Most of this money is flowing through bilateral channels and the regular finance which was given is now being linked to climate. Regular aid and assistance which normally was given to the developing world – they are now trying to link it to climate imperatives,” said Rashmi, a retired IAS officer who worked as India’s principal negotiator at climate change conferences.

He stressed that building conditionalities into finance is not the best way to move forward and “what needs to be done is to support the countries through a cooperative regime.”

The discussion paper noted that the UN secretary-general’s climate action summit has a number of “new asks” as it calls for ramping up of climate actions worldwide, reduce greenhouse gas emissions by 45 percent over the next decade, and to net zero emissions by 2050. 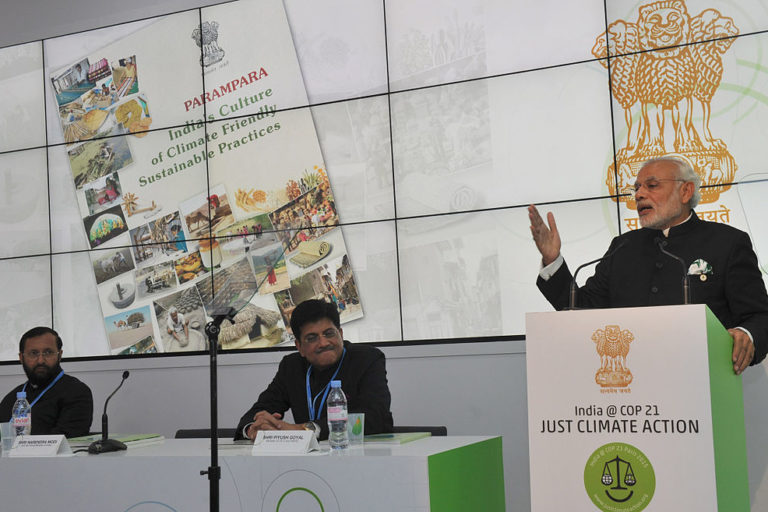 “The new asks, in particular, net-zero emissions mean a sweeping change across the entire economy, doing away with emissions. This can be a global aspirational goal and developed countries must be on track to take measures and legislate for net-zero emissions by 2050. But it cannot be a goal for developing countries as the technologies have not progressed and aren’t all available yet for developing countries. And the past performance on both finance and technology front is just not reassuring for them,” said the DEA’s discussion paper.

Ramanshu Ganguly, assistant vice president-research at Sambodhi Research, an Indian research services organisation working in areas such as energy and environment, said that considering that the objective of the climate action summit in New York is to do a rain check on the climate adaptation and mitigation mechanisms, in line with the Paris Agreement, being taken globally, this “paper holds critical importance.”

“The paper highlights the gaps between the commitments and the actuals in terms of climate finance. The whole idea behind global action for climate change lies in the principle of equitable action. Hence, to expedite action, climate financing measures doled out by developed nations to the developing nations is a necessity. However, if the targets are to be achieved, adequate finance is a critical input. The focus of the paper is to make the developed world walk the talk,” Ganguly told Mongabay-India.

He explained that the government’s discussion paper does bring out quite a few interesting trends on how the 3S’s of climate finance (Scope, Scale and Speed) have performed.

“If the road maps towards an annual US$ 100 billion commitment has to be developed, there definitely lies the need to take concrete actions towards this end. The global agreement has been towards an equal distribution of public climate finance towards mitigation and adaptation measures. However, the paper calls out the skewed preference towards mitigation than adaptation. A developing Party such as India has laid significant focus on adaptation measures, this paper will definitely call for more concerted, focused and intended action by the developed Parties,” Ganguly said. Extreme weather events are on the rise in India due to climate change. Photo by Smibinozone/Wikimedia Commons.

Rakesh Kamal, an independent climate negotiations expert, said that “we are in a state of climate emergency and everyone is looking out for themselves.”

“The track record of climate finance is so bad that we need to start looking inwards more and make use of our indigenous methods of fighting climate change,” Kamal told Mongabay-India.