Updated : March 26, 2019 05:20 PM IST
Royal Bengal tigers in the Bangladesh Sundarbans could be wiped off by 2070 due to a combination of climate change and sea level rise.
By 2050, researchers forecast a Ceriops-dominated mangrove stretch along the India-Bangladesh border would potentially be the last refuge of the big cats in the Sundarbans.
Transboundary conservation measures by the Bangladesh and Indian governments are needed urgently otherwise the fate of the tiger will be the same in the entire Sundarbans, said researchers.

In 50 years from now, by 2070, the entire population of Bengal tigers in the Sundarbans mangroves in Bangladesh is likely to be lost to climate change and sea level rise, a modeling study by Bangladesh and Australian researchers has predicted.

Further, by 2050 researchers forecast that a Ceriops decandra-dominated mangrove stretch along the India-Bangladesh border would potentially be the only refuge of the big cats in the Sundarbans, underpinning the urgency of executing transboundary measures in conservation. “If we don’t look after Bengal tigers and their critical habitats, our studies show a rapid decline in the Bengal tiger population and suitable tiger habitats in the Bangladesh Sundarbans area by 2050, and a complete loss of this species by 2070,” said the corresponding author of the study, Sharif A. Mukul.

Spanning more than 10,000 square kilometres, the Sundarbans region of Bangladesh and India is the biggest mangrove forest in the world and also the most critical area for Bengal tiger survival. Sprawled out across 6,017 square kilometres, the Bangladesh side of the forest covers nearly 60 percent of the total area of the Sundarbans. The rest is in India.

The latest census using camera traps has pegged the number of tigers to be between 83 and 130 in the Bangladesh Sundarbans while in India side of the mangroves they are believed to be 86 (photographed).

“Quite surprisingly, we found that climate change has a bigger impact on Bengal tiger in Sundarbans than that of sea level rise alone, which was thought to be more important than climate change until recently,” said Mukul an assistant professor at Independent University, Bangladesh.

The study considered sea level rise as a consequence of climate change and therefore both of them are mentioned separately, explained Mukul. The researchers specifically examined suitable tiger habitats in the mangrove ecosystem where the big cats prefer to live.

Mukul told Mongabay-India: “Another interesting point that we saw from our study is that in the last moments when the tiger population reaches a critical stage, the suitable habitats with tigers would be present only in the mangrove landscape bordering India.”

This is the space along the India and Bangladesh borders in the Sundarbans and is the site of Bangladesh’s Sundarban West Wildlife Sanctuary. Mukul believes the reason could be the domination of Ceriops decandra species of mangroves in this border stretch where salinity is relatively higher than the rest of the Sundarbans.

“These areas are also far away from human interference,” he said.

The researcher underscored the contiguity of the mangrove landscape, between the two nations, as a unifying factor in implementing transboundary conservation measures that are still on paper.

Climate change is likely to follow a similar path in the Indian Sundarbans and its counterpart in Bangladesh, observed Mukul, adding both sides are also vulnerable to rising sea level.

“Both India and Bangladesh Sundarbans share the similar environmental and socio-economic setting and interestingly there has not much illegal logging or forest loss on both sides of the Sundarbans as much of the mainland/land-based forests in both countries have experienced,” Mukul reasoned.

“Apart from illegal poaching and human-tiger conflict, which is also common on both sides of the Sundarbans, we believe the fate of the tiger will be the same in entire Sundarbans if the governments don’t take necessary action including transboundary conservation and monitoring of Bengal tiger and more areas dedicated for tiger conservation,” he warned.

Y.V. Jhala, scientist at the Wildlife Institute of India, working on the monitoring of status of tigers, co-predators, prey and their habitats in India agrees with the findings of the study.

“Magnitude can vary depending on simulation model parameters but threats are real and affect Indian Sundarbans as well,” Jhala told Mongabay-India.

A 2016 modeling study on the Bangladesh Sundarbans mangrove forest predicted a substantial loss of mangrove forest area by 2100 under highest possible (realistically by 1.48 meter ) sea level rise scenario. But the authors note “the mangrove forest loss cannot be more than 17-20 percent of the existing area, considering the still prograding nature of the delta in Bangladesh part due to water and sediment supply from Brahmaputra, Padma and  Meghna rivers.”

Using climate change predictions to determine the impact on tigers

The researchers tapped into computer simulations to assess the suitability of the low-lying Sundarban region for tigers and their prey species, using two greenhouse gas concentration scenarios (RCP6.0 and RCP8.5) developed by the Intergovernmental Panel on Climate Change (IPCC).

Representative Concentration Pathways (RCPs) are based on plausible ranges of global greenhouse gas emissions and/or concentrations, where RCP8.5 is a substantially rising pathway (“worst-case scenario”) and RCP6.0 is an intermediate pathway.

Their analyses included factors such as extreme weather events and sea-level rise. The vegetation data of the Sundarbans were obtained from the Bangladesh Forest Department.

“We used the occupancy data of Bengal tiger based on pugmark sign. For the present study, we used 66 tiger presence points. To predict the future distribution of Bengal tiger in the Bangladesh Sundarbans, we used two reference year, 2050 and 2070,” said Mukul.

Climate change alone will result in a reduction of 96.2 percent and 99.4 percent Bengal tiger habitats in the area in 2050 and 2070, respectively using IPCC’s RCP8.5 and RCP6.0 scenarios, the analysis revealed.

In both the scenarios, the combination of climate change and sea level rise will lead to the total loss of Bengal tiger habitats in the area by 2070.

Important factors linked to the distribution of the big cats in the Sundarbans are rainfall in the summer season, vegetation (mangrove species) and maximum temperature of the warmest month.

“However, our models did not incorporate aspects such as disease outbreak, poaching of the tiger, reduction of prey species that also shape their existence and distribution. We must also understand that the Sundarbans is a very dynamic system. While land is lost to erosion, island deposits are also formed due to accretion. So the actual scenario could be better or worse than what we have predicted,” Mukul said. 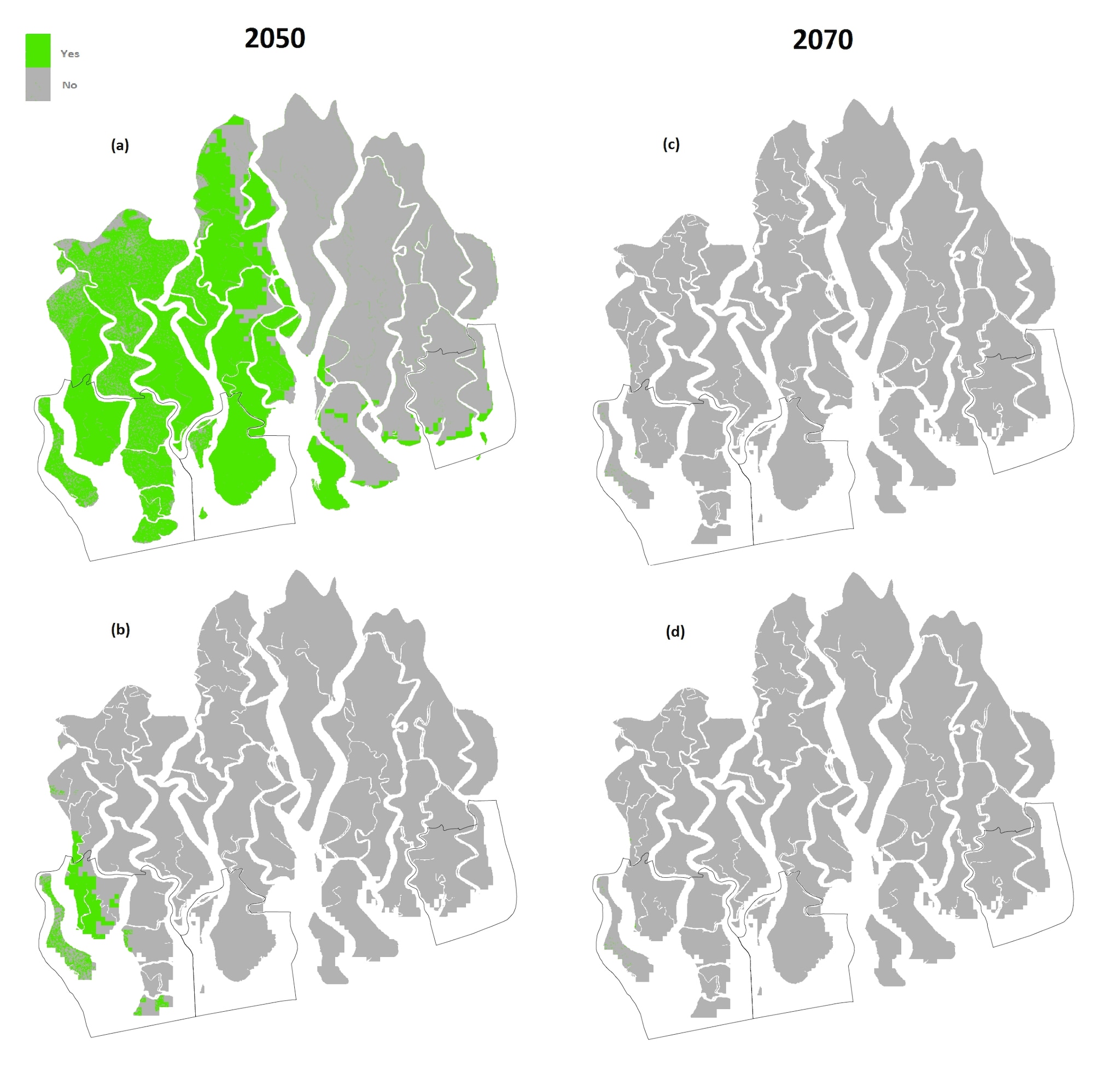 Congruence of climate change and sea level rise impacts for 2050 and 2070. Photo by Sharif Mukul.

In Bangladesh Sundarbans, the three main wildlife sanctuaries (i.e., Sundarban West, South and East) together cover around 23 percent of the total Sundarbans reserved forest owned by the Bangladesh Forest Department.

This figure is “still inadequate”, the researchers argue, considering the fact that, Sundarbans is the largest wild habitat of Bengal tigers and only place where tigers are adapted to live in mangrove ecosystems.

The government of Bangladesh should prioritise tiger conservation by designating more areas for tiger conservation, create corridors for transboundary tiger movements, continue with strict monitoring and law enforcement to control illegal human activity in the area, avoid unplanned development in the vicinity and raise public awareness to control human-tiger conflicts in the area, the authors suggest.

“No other place like the Sundarbans left on earth”

The Sundarban Tiger Reserve was created in 1973 and constituted as a Reserve Forest in 1978. The current core area was established as Sundarbans National Park (1330 square km) in 1984. In 1989, under UNESCO’s Man and Biosphere (MAB) Programme, the Sundarbans Biosphere Reserve (SBR) was declared which includes the STR and the reserve forests outside the STR.

Over the last three decades, expansion of core area (by 28 percent) in the Indian side and notification of a part of the buffer area as a wildlife sanctuary, shrunk the area available for fishing (both land and water) from 892.38 square km to roughly 523 square km.

Even in the reserve forest outside the STR, where fishing is permitted only to boats with licenses, fishing areas are gradually becoming unavailable.

“On the Indian side, there are some positives. For example, the height of the land (metres above sea level) is more than that in Bangladesh Sundarbans. Human pressure on the forest is low. To control escalating human-wildlife conflicts the provision of alternative livelihoods has to be executed properly,” said Mukul.

Professor Bill Laurance of James Cook University in Australia, a co-author of the study emphasised in a press release that the more of the Sundarbans that be conserved – via new protected areas and reducing illegal poaching – the more resilient it will be to future climatic extremes and rising sea levels.

“There is no other place like the Sundarbans left on earth,” said Laurance. “We have to look after this iconic ecosystem if we want amazing animals like the Bengal tiger to have a chance of survival.” 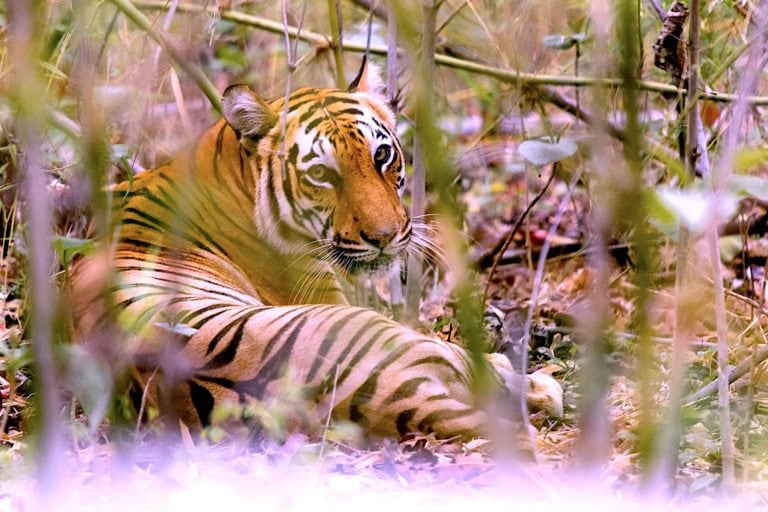 Transboundary conservation measures by the Bangladesh and Indian governments are needed urgently otherwise the fate of the tiger will be the same in the entire Sundarbans, said researchers. Photo by Rakesh Narala.
The story was originally published in Mongabay-India.
Tags climate change endangered species India-Bangladesh border Mongabay-India Sundarbans tiger habitats Tigers Transboundary conservation