Updated : March 29, 2019 04:40 PM IST
For many tree species in India, we don’t have enough widespread and long-term data to make meaningful links to a changing climate.
SeasonWatch, a citizen science initiative, is collecting data about leafing, flowering and fruiting in common trees from volunteers to understand their seasonal phases and links with changing seasons.
Though the program is open to all, its special focus on schools is helping engage with more people, spreading interest and awareness about the natural world and how it is changing, while also receiving consistent data from ‘citizen scientists’.

A school teacher in Meghalaya spent the last four days of his holidays travelling around 30 villages looking at trees. Resly Roy Pariong was scanning trees in backyards, gardens and any tree along the road that caught his inquisitive eye. “It took approximately three minutes to observe each tree and make a note of the location, fruits, flowers and leaves,” said the science teacher.

He was on a self-motivated mission to monitor the trees in West Khasi Hills district as part of the first edition of Spring Tree Quest, a nationwide event that had 137 individuals and participants from 59 schools and colleges across the country gazing at flowers and foliage.

Spring Tree Quest is the latest in a series of events organised by SeasonWatch, a citizen science initiative established in 2010 is a three-way partnership between the Nature Conservation Foundation (NCF), the National Centre for Biological Sciences (NCBS) and Wipro Foundation. By getting people to observe and record trees, SeasonWatch aims at spreading interest and awareness about the natural world and at the same time collect data on the seasonal phases of common trees from across the country, in order to understand the influence of changing seasons.

This year’s ‘bioblitz’ Spring Tree Quest took place between 15th and 18th March 2019, heralding the onset of spring in the country. 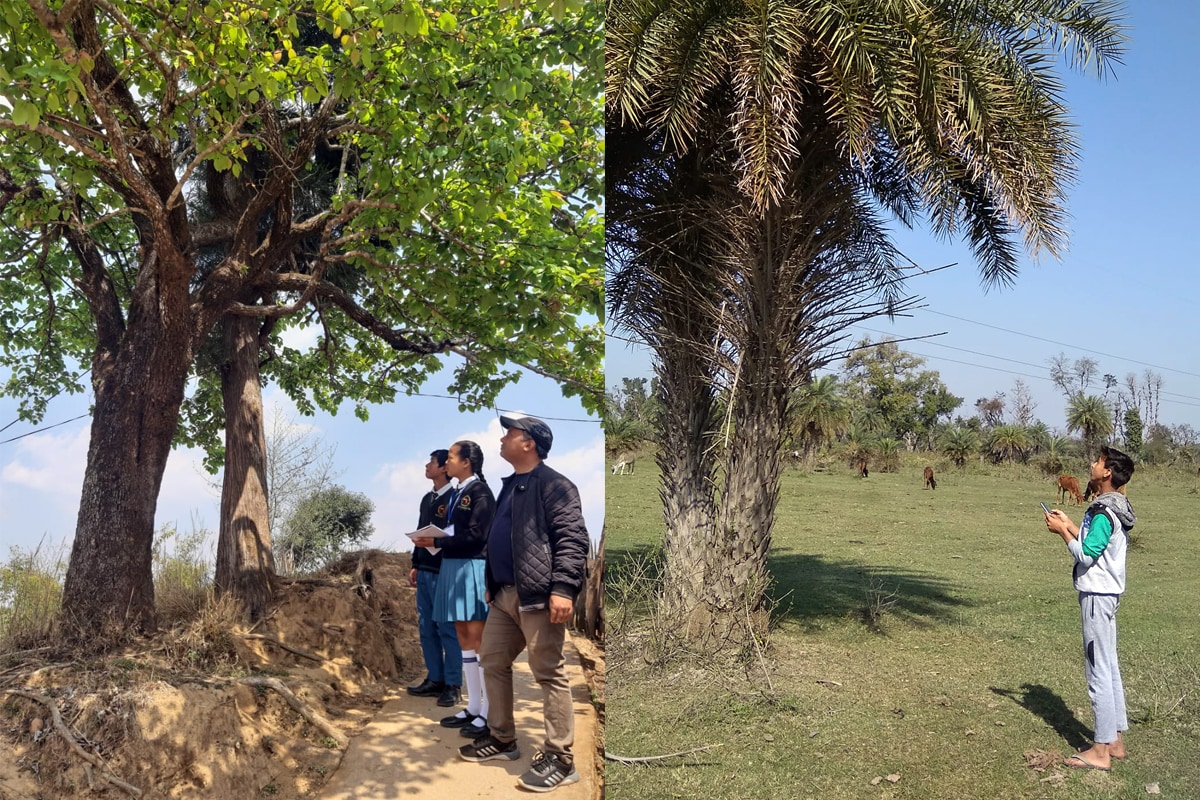 Volunteers from 22 states and 5 union territories in India collectively shared observations of 14,706 trees during Spring Tree Quest. This data is part of a larger set of observations collected year-round by SeasonWatch through its website or mobile app. As of 29th March 2019, over the past nine years, the program has collected 2,71,857 observations from 40,725 trees from a list of 122 most common and widespread trees of India. The program has also managed to register 627 schools to contribute data. Involving students and teachers and marshalling their inclination towards outdoor activities has helped the database receive a regular flow of weekly data.

Analysing the data of trees such as mango, teak and neem, which have been sufficiently represented in the database, researchers can ascertain certain seasonal patterns. “Next step is to correlate the phase of the tree and the climatic conditions,” said Ramaswami. “The only issue is that we need a lot more data.”

Talk to trees to know about climate change

The IPCC 2007 report states that phenology – the seasonal activity of plants and animals – is the simplest way to track changes in the ecology of a species in response to climate change.

Phenological changes in trees are a widely accepted indicator of climate change, especially for temperate regions. For example, a study period of 71 years (1936-2006) on the flowering times of seven plant species in Alberta, Canada, revealed that the quaking aspen (Populus tremuloides), standing tall in the central parklands, showed signs of early blooming. An increase of 5.3 degree Celsius in the mean monthly temperatures for February caused the bloom dates of the native North American tree to advance by two weeks.

Thousands of kilometres away in the south Indian state of Kerala, the Indian laburnum (Cassia fistula) is blooming weeks in advance. The blooming period of its conspicuous bright yellow flowers is traditionally known to coincide with Vishu (the first day of the Malayalam calendar) in mid-April. But is climate change the reason?

“Peninsular India is tropical and here the temperature difference between summer and winter is not as stark as it is further north or in temperate regions. Here, it may be difficult to tease apart the effect of changing temperature from other factors, such as rainfall,” said Ramaswami. “It is also difficult to comment on the effect of varying climatic conditions in the absence of large-scale historical data on tree phenology since we do not have any baseline phenology to compare current patterns with.” Data from Spring Tree Quest 2019 revealed higher proportions of the Indian laburnum flowering before their expected bloom time in mid-April. Researchers need a lot more phenological data to find the reasons for the shift. Data from SeasonWatch, graph by Kartik Chandramouli/Mongabay.

She pointed out to a well-known study about how an early spring due to global warming has caused phenological mismatches in the Netherlands. Caterpillars of the winter moth which feed on the young leaves of the oak tree had to adapt to changing climate when the oak started putting out new leaves earlier due to a warmer spring. While the caterpillars managed the shift and emerged earlier, the pied flycatcher, a migratory bird for this region, couldn’t adapt to this change to advance its migratory period. The cascading impacts resulted in population decline for the bird.

Such systematic, nationwide studies are not prevalent in India, said Ramaswami. “A number of research groups have undertaken phenology research across India. However, they may not be comparable owing to the fact that the parameters and protocols used to measure phenology are variable across studies.”

“In India, we need an openly available database,” commented Sridhar Gautam, senior scientist at Indian Council of Agricultural Research-Indian Institute of Horticultural Research (ICAR-IIHR) and a contributor to SeasonWatch. “Published studies and their data should be extracted to the database and the future studies should keep adding to it. The MoEFCC [Ministry of Environment, Forest and Climate Change] should support and encourage the institutionalisation of a central network on phenology in India.”

He added that historical datasets should be available to anyone who is interested in climate change studies. “At least due to seasonswatch.in or treecalendar.org (a project by Kerala Forest Research Institute which is now discontinued), there are attempts to systematically collect data on tree phenology.”

The making of citizen scientists: catch them young

Students from a school in Gaindi Khata village, Uttarakhand, some of whom had just stepped out of their board examinations, decided to volunteer and record data. Led by 25-year-old Taukeer Alam, a field assistant with Nature Science Initiative, they submitted 1106 observations and are in the list of top 5 school/college contributors.

“Based on the timing of the Holi festival, the kids knew that they’d see the flame of the forest in full bloom. But we saw very few of them in full bloom,” recollected Taukeer. “The kids might not understand why this happens or the effect of climate change but they are paying attention to changes in nature which are usually overlooked.”

Pariong and his school students in Meghalaya have managed to form a weekly practice of logging data into the SeasonWatch mobile app. He said that the students submit their handwritten reports to him without a need for reminders. A teacher in Kerala has a strange issue: her students “just won’t stop observing trees and noting their observations.”

Vidhya Sundar, a bakery business owner and active bird watcher from Bengaluru, participated in her second SeasonWatch event after taking part in the Winter Tree Quest in December 2018. “I took some kids to areas adjoining lakes and some areas near our residence. Since it’s spring, they saw many trees in full bloom and they loved it. If you don’t take them, they’ll sit at home connected to their gadgets,” said the nature enthusiast. She was amused by their innovative ways to remember and identify trees. “The golden trumpet tree was nicknamed as the Trump tree.” 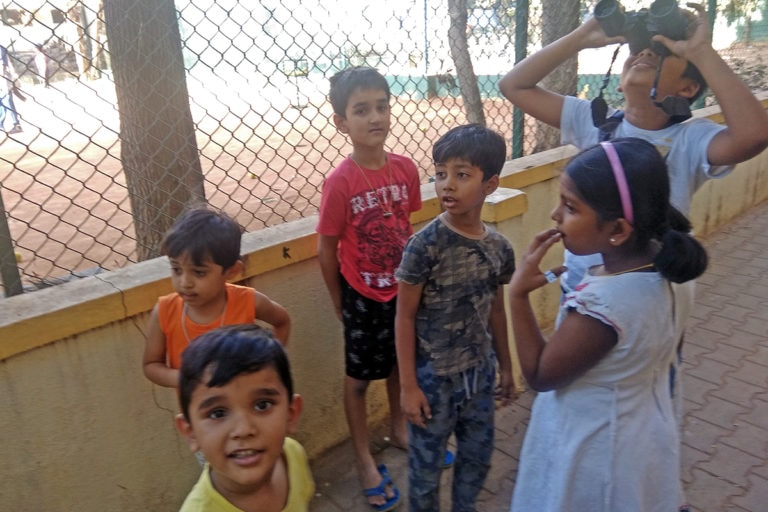 These could be considered as a sign that the programme is not only helping gather data but also raising awareness about nature, ecology and also introducing school children to climate change. A Yale study conducted in 2015 revealed that in a developing country such as India, 65 percent of respondents weren’t aware of climate change. Citizen science initiatives could possibly change that.

“In Kerala, SeasonWatch has been active for many years. Teachers say that the kids have responded well to the events and there’s an attitude change towards trees and the environment. But we’d like to do a scientific assessment to evaluate it,” said an optimistic Ramaswami about the programme’s future plans.

SeasonWatch plans to conduct four India-wide Tree Quests, one for every quarter of the year, addressing distinct seasonal changes. They also intend to reach out to more schools across the country and also expand their audience to colleges to look at the initiative through a research-based framework. This will slowly and hopefully help increase the quantity and quality of observations and provide a richer dataset for analysis.

“I’ll continue to add my observations on the app. It helps me understand nature better,” said Pariong. “I’ve seen some trees bloom earlier and some later than usual. We’ll have to study the rainfall, temperature and other environmental factors. It could be because of these cell phone towers or climate change or something else altogether,” he speculates.