Bye, bye birdie: A bird sanctuary could disappear as Pune metro speeds ahead

Updated : April 18, 2019 05:04 PM IST
Over a 100 species of birds and around 30 species of butterflies have been recorded in Pune’s Dr. Salim Ali Bird Sanctuary, report birdwatchers and nature enthusiasts.
From garbage to road construction, the sanctuary has faced several threats, with the latest being an elevated metro line.
However, it is water, not infrastructure, that is high on the environmental concerns of Pune’s voters, according to a survey.

“Enter via the big arch of the crematorium.”

The ominous instructions to reach the Dr. Salim Ali Bird Sanctuary in Pune perhaps foreshadow the fate that is looming for this green patch.

Located off the busy Nagar Road in Pune, on the banks of the Mula Mutha river, the inconspicuous sanctuary shares an entrance with a crematorium and a garbage dump – not the most appealing welcome for visiting birds or birdwatchers. The slice of green, however, has been quietly attracting several species of birds and butterflies and houses a variety of trees and shrubs.

But Pune’s booming infrastructure is likely to swallow it up, to accommodate the city’s growing population and its needs.

For years now, citizens have been pushing the local authorities to take action to protect the small but significant bird haven. From garbage accumulation to an upcoming road running through it, the threats have only escalated over time.

The latest threat is an elevated metro line that will possibly mark the end of the sanctuary. 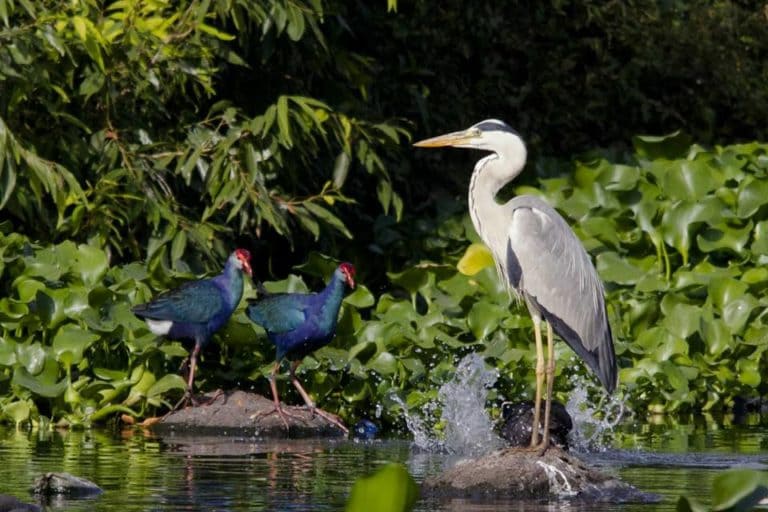 Many resident and migratory birds are found at the bird sanctuary that lies in the midst of a busy part of Pune city. Photo courtesy Dr. Salim Ali Bird Sanctuary Pune.

Over 100 species of birds and around 30 species of butterflies have been recorded in the area, report birdwatchers and nature enthusiasts. Among those spotted are common birds like ruddy shelduck, golden oriole, garganey, black-winged stilt, the near-threatened painted stork and vulnerable wooly necked stork as well.

The story goes that renowned ornithologist Salim Ali – after whom the sanctuary is named – visited the area in the 1970s with environmentalist-educator Erach Bharucha and inaugurated this sanctuary, identified by city ecologist Prakash Gole.

“At that time, there were local fishermen here and as per their traditions, they had created small natural bunds (dams) along the river, which helped make it a conducive environment for birds,” narrated Meghana Baphna, a core member of the citizen group, fighting to save the sanctuary.

But following years of neglect, the pollution in the Mula Mutha has been impacting the birds and the loss of habitat with the upcoming road and metro project could mean final death knell.

Co-located with a crematorium ground and garbage dump, the Pune’s Dr. Salim Ali Bird Sanctuary is teetering under anthropogenic pressures. Over the years, the area close to the sanctuary has become a prime real estate market, given its proximity to the airport and one of the city’s information technology hubs. About a year ago, activists had challenged de-reservation of plots in the middle of the sanctuary for a builder, as that would break the sanctuary’s contiguity.

The construction of the Pune metro will open up either side of the route for real estate development. “When the metro comes, the Floor Space Index will grow for builders. There will be more people and more pressure on this area,” explained Baphna. “Already a huge amount of untreated sewage is going into the river, with more people, there will be more sewage as well.”

The original alignment of the elevated metro route was infact not via the sanctuary, but via the main Nagar Road that lies a few metres from it. The proposal for the alignment was rejected by the Centre because it would then pass through the restricted construction area within 100 metres of the heritage site, Aga Khan Palace.

In addition to the changed route, citizens have also been regularly fighting against the rampant cutting of trees in the area which they allege is without appropriate notice and not in the prescribed manner. “Tree cutting and replanting are not done correctly. There is a scientific way to transplant but the way it is done now leaves less chance of survival of the tree,” said Baphna.

“We are not against the metro or development. But we want it to be sustainable,” she emphasised. From online campaigns, meetings with local authorities to chain fasting and on site protests, constant monitoring and awareness campaigns like bird watching sessions and wall paintings, the group of citizen activists are on a mission to save the green lungs.

The metro project has also faced opposition from citizens in other parts of the city for cutting of trees, relocation of residents and establishments and has been contested in the National Green Tribunal for ecological impacts along the Mula Mutha river bed.

According to the environment impact assessment report for the Pune Metro, the project is noted as a “high risk” project, which indicates that there may be “highly significant, adverse and/or long-term environmental and social impacts, the magnitude of which is difficult to determine at the screening stage”. Around 1124 trees are likely to be lost due to the proposed project, according to the report. While a majority are proposed to be transplanted, the current unsustainable hacking of the trees leaves the survival of the trees in a limbo.

The report estimates that with for every tree lost there would be a decrease in CO2 absorption at 3 kg per year and decrease in oxygen production at 11 kg per year.

Water, not infrastructure, among top priorities for Pune voters

While the plan for a metro in the city was raised over a decade ago, the foundation stone for two Pune metro lines was laid in 2016 and for the third line in 2018, by prime minister Narendra Modi. In the run-up to the elections, the metro project has been evoked in speeches of the prime minister as well as the state’s chief minister.

But for the Pune voter, infrastructure development is not a priority in the upcoming elections, according to a recent nationwide survey by Association for Democratic Reforms. Pune goes to polls on April 23.

Drinking water, it turns out, is among the top three voter’s priorities in Pune, with agricultural loan availability and better employment opportunities being the others. The city’s perception of the government’s performance on these three issues however, is rated as below average.

In fact the encroachment of public lands, lakes etc. is of least priority among governance issues for voters nationally, found the survey. 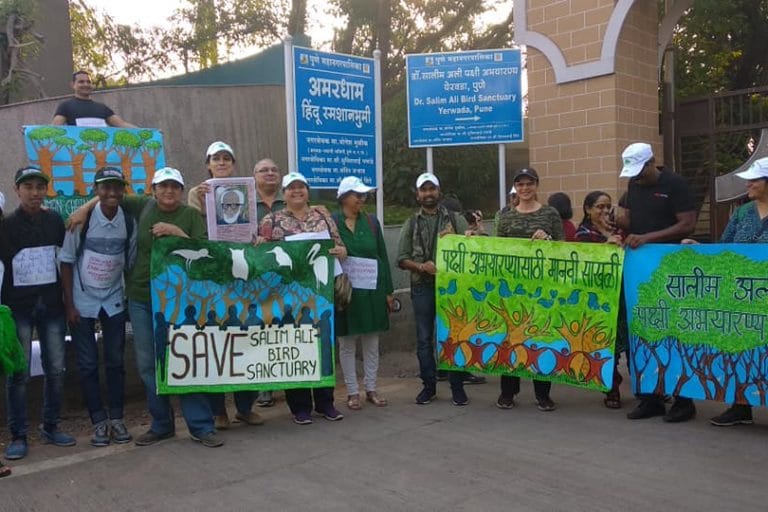 Baphna feels that the issue of Pune’s ecology being impacted by the metro is unlikely to become a matter of influence in the general elections. “There is so much apathy so I don’t know if it will really impact the general elections. I suppose it will take someone from among the environmentalists to come into politics for any real impact in the near future.”

Pune resident Shashikant Dalvi who leads the district chapter of The Climate Reality Project, India is convinced that the environment and particularly the impacts of climate change should be essential issues considered by political parties because “they are issues of human survival.”

He has been working towards raising awareness on the linkages between the availability of water and climate change for several years now. “There is a huge water crisis in the country, particularly in Pune. There is uneven water distribution in the city. Water supply infrastructure hasn’t kept up with the growth,” emphasises Dalvi who is also the Project’s national coordinator for water conservation.

For the upcoming elections, he has put together a ‘climate manifesto‘ for political parties.

Retired from the Indian Army, Dalvi found that in every election, manifestos never mentioned global warming and climate change or substantial actions to combat the threats. “But they are the ones that make policy, they allot funds and implement it,” he stresses on why the need for authorities to consider climate change is imperative. While infrastructure and development is evoked in election speeches, it is water that is the top environmental concern for Pune voters. Photo by Rsrikanth05/Wikimedia Commons.

“Infrastructure does need to come in the city. But is our infrastructure capable of sustaining the changing temperatures?” he asks. “Temperatures are going to shoot up without a doubt. Are our architects, builders, engineers and development organisations trained for creating the infrastructure that can manage climate change? It’s not only about making rules, but also the need to check if the implementation is proper or not.” he added.

The climate change manifesto he has worked one may not have a strong impact this year, he feels, but will have some influence when Maharashtra goes for state elections later this year.

Overall, awareness is low he believes, but still has hope. “The world is becoming small. People are seeing youth making noise about climate change. The young climate activist from Europe, Greta Thunberg is even nominated for a Nobel Prize. Young people are major stakeholders. And maybe the voters today will realise that we have to do this for our children,” he said.

Reflecting his hope in the future generation are the thoughts of a young protestor Alefiya Malubhoy, who, in a video for saving the Salim Ali Bird Sanctuary of Pune, says, “…this is our heritage, we think it is the responsibility of the law to have to protect our biodiversity. We shouldn’t have our adults and our parents come here to fight for our war. We need action and we need answers now.” 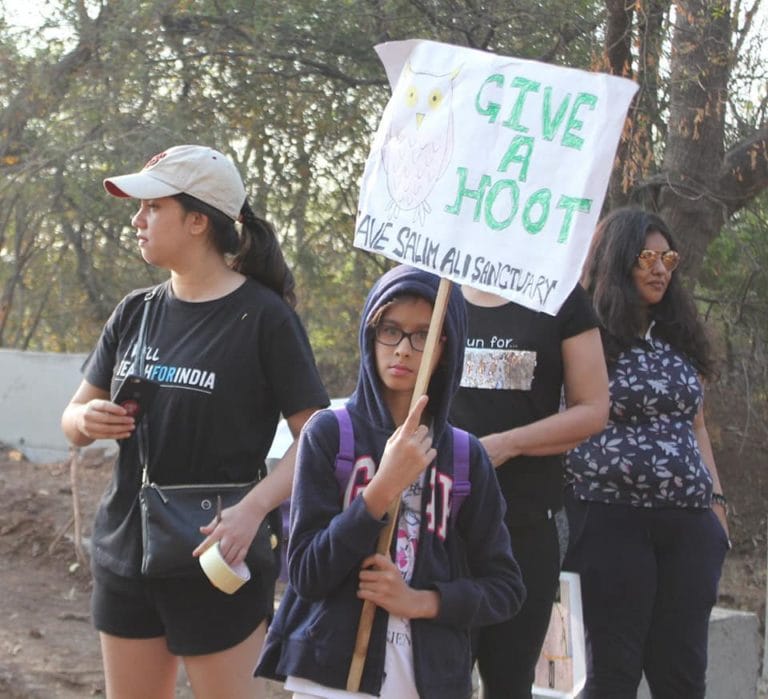