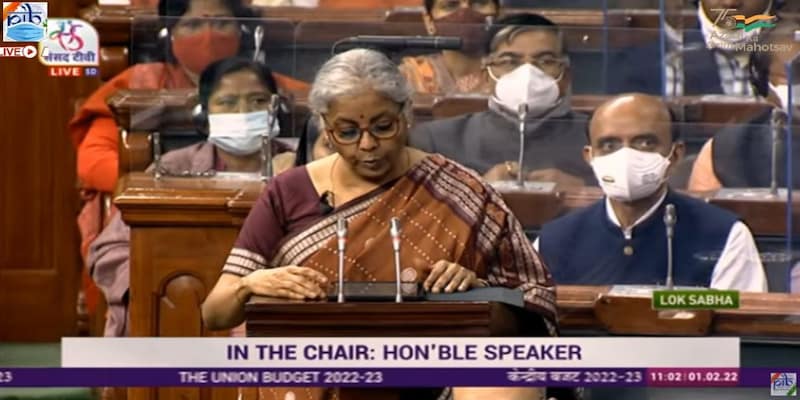 The fiscal deficit--total money spent by the government in excess of the total income earned--for FY22 is 10 basis points higher than the government's earlier projection of 6.8 percent.

The government has pegged the fiscal deficit for 2021-2022 at 6.9 percent of gross domestic product (GDP) and at 6.4 percent of GDP for 2022-23, union finance minister Nirmala Sitharaman said in her Budget speech today. This number is closely tracked by the bond markets and has implications for interest rates in the system.

The fiscal deficit--total money spent by the government in excess of the total income earned--for FY22 is 10 basis points higher than the government's earlier projection of 6.8 percent. The last year’s Budget had pegged the fiscal deficit for FY22 at Rs 15.07 lakh crore, or 6.8 percent of GDP, which has been revised to 6.9 percent. This compares with a high fiscal deficit of 9.3 percent in FY21, when India was locked down due to the first wave of Covid, and economic activity had ground to a halt.
The budget has proposed a fiscal deficit of 4.5 percent of GDP by FY26. A fiscal deficit of 4 percent of Gross State Domestic Product (GSDP) will be allowed for states in FY23, FM Sitharaman said.
Also Read:
Budget 2022: FM Sitharaman announces setting EV charging stations, battery swapping policy
This is in line with the government’s commitment made last year, when the FM said that the government would continue with the path of fiscal consolidation, and intend to reach a fiscal deficit level below 4.5 percent of GDP by 2025-2026 with a fairly steady decline over the period.
Most economists CNBC-TV18 spoke to were working with Rs 15-16 lakh crore of deficit for the current fiscal. A back-of-the-envelope calculation shows the 6.9 percent fiscal deficit for this year translates to about Rs 16.65 lakh crores in absolute terms, slightly larger than expectations.
While the Rs 16.65 lakh crore figure does look large, perhaps the good news is that it comes on the back of larger capital expenditure. The government has announced a massive increase in the capital expenditure for FY23 by a sharp 35.4 percent to a record Rs 7.50 lakh crore from Rs 5.54 lakh crore in FY22.
Also Read: Union Budget 2022: LIC IPO expected shortly, says FM Nirmala Sitharaman
The increase in fiscal deficit for the year is largely on the back of this number.
Various agencies had estimated fiscal deficit at 5.7 to 6.4 percent of the GDP for FY23. This compares with the 6.4 percent announced by Finance Minister Nirmala Sitharaman today. (Refer to Table Below)
"If disinvestment of LIC passes through in FY22, Government might be ending fiscal with a large cash balance of Rs 3 lakh crore. This can come in handy in supporting a large part of the government fiscal deficit without taking recourse to market borrowings. We caution that any new taxes like wealth tax or others at this point could do more harm than benefit,” Soumya Kanti Ghosh, Chief Economic Advisor at State Bank of India had earlier said.
India's fiscal deficit has jumped in recent years as the government stepped up sending to protect the economy from the impact of the coronavirus pandemic.
For all the latest updates on Union Budget 2022, follow our LIVE blog here
For full coverage of Union Budget 2022, click here
(Edited by : Jomy Jos Pullokaran)
Check out our in-depth Market Coverage, Business News & get real-time Stock Market Updates on CNBC-TV18. Also, Watch our channels CNBC-TV18, CNBC Awaaz and CNBC Bajar Live on-the-go!