Updated : January 30, 2020 07:25 PM IST
Commerce Ministry has recommended correction in inverted duty structure in several products
Udyog Bhavan wants inbound overseas travellers to buy only 1 litre of imported duty-free alcohol
Customs duty on near about 3000 products has been hiked since the year 2014 on different occasions

When Finance Minister Nirmala Sitharaman tables her second budget on February 1, she will be doing so in the backdrop of one of the most challenging times that the Indian economy has faced. While people across India will be waiting with bated breath for income tax sops, investors and market players will be keeping a close watch on the balance sheet of government expenses that she will present.

A key set of proposals that will impact both the common man and corporate India alike will be proposals floated by Commerce Ministry covering issues like import restrictions and specific measures to boost exports. This will have a domino impact on India’s factory output, which as per India’s statistical enumerators could be the lowest in one and a half decades.

Many government officials and functionaries that the author spoke to also joined in their disagreement. The Association of Private Airport Operators (APAO), an umbrella organisation of 7 privately owned airports raised red flags on the proposal immediately. According to APAO, on average duty-free revenues account for 15 to 20 percent of the non-aero revenues of an airport and sales of alcohol and cigarettes comprise up to 80 percent of sales there.

The association warned that charges paid by passengers could go up by Rs 200 crore annually if the restriction is imposed and AAI, India’s airport regulator could lose as much as Rs 300 crore annually due to reduction in revenue share payments by airport operators in Delhi and Mumbai. APAO also cautioned that 8,000-10,000 direct and indirect jobs could be lost due to layoffs of workers engaged in marketing and sales, logistics and warehousing.

Restrictions on duty-free alcohol quota is just a small part of Commerce Ministries proposals to its finance counterpart.

About 270 items have been recommended by Udyog Bhawan for an increase in customs duty and the logic is to bring the domestic industry at par with foreign players in these products and promote “Make in India”. Officials point out to CNBC-TV18 that during the reign of the Modi government, customs duty on near about 3000 products has been hiked since the year 2014 on different occasions.

Items that have been proposed for hike include furniture where customs duty hike of 30 percent has been proposed from the current level of 20 percent. Imported Tricycles and Toys could also get expensive if North Block agrees to a commerce Ministry proposal to increase import duty to 100 percent from the current level of 20 percent.

Indian tyre manufacturers, who have been up in arms against cheap imports may get relief if Sitharaman imposes a 40 percent import duty on foreign tyres as against the current level of 10-15 percent. Udyog Bhawan has also called for a hike in coated paper import duty to 20 percent as against 10 percent seen currently. 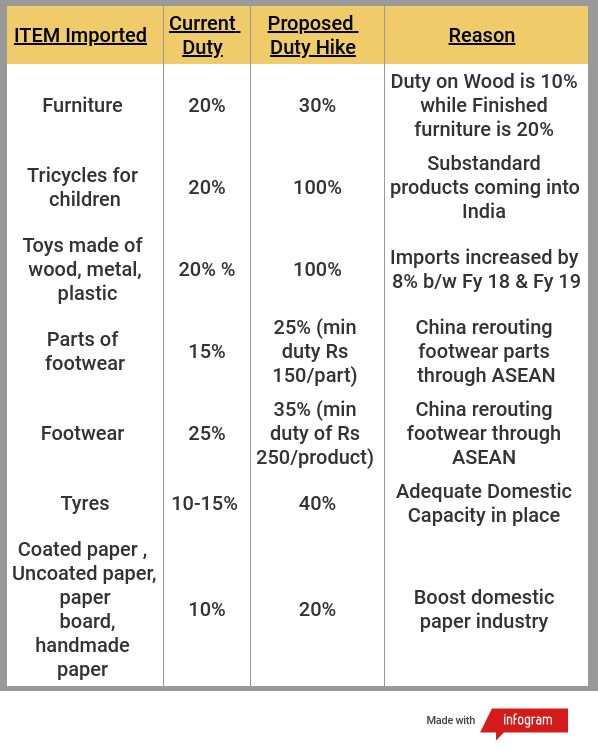 The Commerce Ministry has also sought a reduction in duties of several intermediaries used by India’s manufacturing sector. While suggesting higher customs duties on imported paper, Udyog Bhawan has also called for zero duty imports of machinery, wood pulp, and waste paper. Duty-free imports of styrene-butadiene rubber, a key ingredient in the manufacture of tyres is also being proposed. 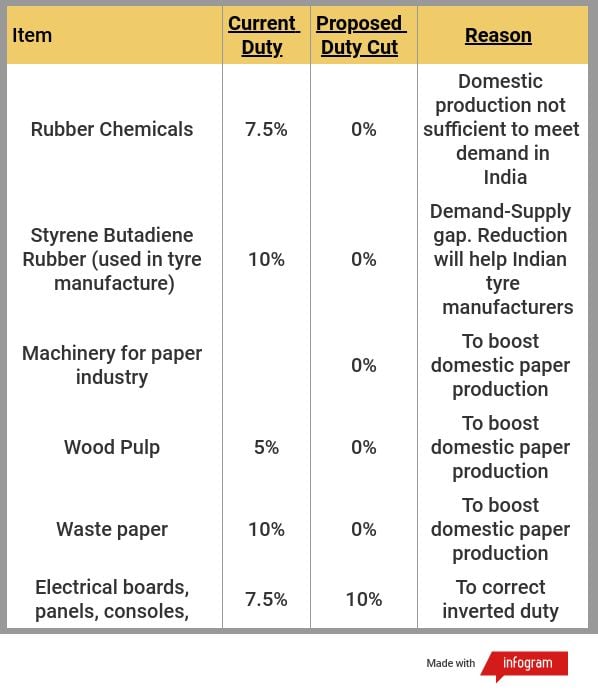 The Commerce Ministry has also recommended correction in inverted duty structure in several products. Inverted duty instances arise when import duty on raw material is higher than the finished product. As a result, domestic users import finished domestic products as the domestic industry stays away from manufacturing such goods. The proposals on customs duties come at a time when the government has been trying to curtail non-essential imports into the country. The Commerce Ministry has been working on a non-tariff strategy to dis-incentivise imports worth $ 127 billion by imposing product standards. BIS, India’s standards watchdog, has been tasked to prepare product regulations of 5,000 goods. Currently, India has regulations on about 400 products.

The budget speech is likely to refer to the proposed National Logistics Policy covering all modes of transport for goods. The policy has been under the works for over a year by a newly formed logistics division under the Commerce Ministry.

On her part, Nirmala Sitharaman is likely to lay out the modalities of several proposed schemes, where inter-ministerial discussions are at an advanced stage. The intent to launch many of these schemes have already been made by her in 2019. This includes spelling out details of a new duty remission scheme for export inputs called Remission of Duties or Taxes on Export Product (RoDTEP) scheme. In addition, the Budget Speech is likely to allude to the  NIRVIK Scheme through which ECGC will give 90 percent cover for export finance.  Sitharman has shared details of both these schemes in September 2019.
Tags budget 2020 Commerce Ministry Customs Duty duty-free Import duty Nirmala Sitharaman Udyog Bhavan