Budget 2019: How the BJP led government fared in the fiscal math

Budget 2019: How the BJP-led government fared in the fiscal math

The Bharatiya Janata Party (BJP)-led central government is looking at several possibilities to get its fiscal math right ahead of the interim Budget 2019. 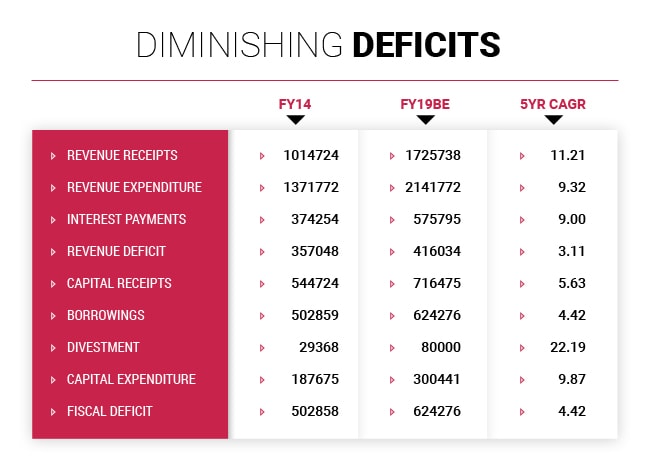 Currently, India’s fiscal deficit has been estimated at 3.3 percent of its gross domestic product (GDP) or Rs 6.24 lakh crore.
However, the government is most likely to miss the 2018-19 fiscal deficit target. The government spending on food, fertilisers and fuel subsidies is on the rise. Further, shortfalls in GST collections and shortfall in the earnings from divestment proceeds is resulting in overshooting of the fiscal deficit.
As per the CGA data, the fiscal deficit stood at Rs 7.17 lakh crore at the end of November 2018, 14.8 percent above the targeted fiscal deficit of Rs 6.24 lakh crores.
In April-November 2018, Central Goods and Services Tax (CGST) collections stood at a relatively moderate around 49 percent of the 2018-19 budget estimates of Rs 6 lakh crore. The disinvestment proceeds in 2018-19 till November were also way below the budgeted target of Rs 80,000 crore.

But, the government has demanded around Rs 10,000 billion crore as an extra dividend from the Reserve Bank of India (RBI) this financial year. It will be interesting to see if the government manages to get this increased dividend, surplus from the RBI, which can help them bolster their revenue.
Check out our in-depth Market Coverage, Business News & get real-time Stock Market Updates on CNBC-TV18. Also, Watch our channels CNBC-TV18, CNBC Awaaz and CNBC Bajar Live on-the-go!