Bottomline: This time is different, not the outcome

Bottomline: This time is different, not the outcome The world is different today and comparisons with earlier crises are relevant only up to a point, the risks for equities are not

There have been several comparisons to where we are today and the 2008 financial crisis by market participants. And while some arguments may be cogent, the circumstances in 2008 and 2022 are very disparate.

And while the movement in the stock price as mentioned by several chartists could appear uncannily similar, expecting the current turmoil to end in quite a similar fashion may be a stretch.
Let’s see why that is.
WHY THIS IS NOT 2008
The global financial crisis of 2008 was sparked by the unbridled exuberance in the US housing finance market. This led to the creation of innovative, high-risk financial instruments around mortgages that significantly expanded the risk in the financial system and led to several large financial institutions becoming insolvent. This damaged confidence in the financial system and sparked a rush to safety—hurting all risk assets. Major central banks infused funds into the system to bring stability to the financial system, virtually emerging as the “lenders of first resort”. Thus, money was thrown to address the big loss of confidence in the financial system and markets, quite like central banks did post-Covid. The crisis impacted investors and those significantly exposed to the financial system. It didn’t impact the poor.
Now, let’s look at where we are today. Our problem today is not low investor confidence. Quite to the contrary, it is an excess of liquidity that needs to be curtailed. Central banks aren’t loosening their purse strings to address a crisis, they are tightening liquidity to try and rein in inflation, which isn’t completely within their ability to temper. The poor are hurting with soaring inflation, not the wealthy exposed to financial markets. The US isn’t the prime driver of the world economy as it was in 2008, China has emerged as a significant counter force—today US is just about 1.4x China’s economy compared to 2.6x in 2010. And the Ukraine war and the polarisation of nations—US-EU against Russia-China—isn't helping. Several other nations are also taking a stand of not aligning with any bloc, but pursuing their own interests, further complicating the plot. Add to this, underinvestment in fossils that raises the risk of energy challenges once the world gets on the recovery path.
So, 2022 is definitely not like 2008. But from a market perspective, the risks are as significant if not greater.
Here’s a chart of the S&P-500 that shows how stocks moved during the global financial crisis, and how they have trended in 2022 so far. There is some similarity in the trend, and if you were to use 2008 as the benchmark, the S&P-500 could lose significantly more value before it settles. But take that input with more than a pinch of salt. 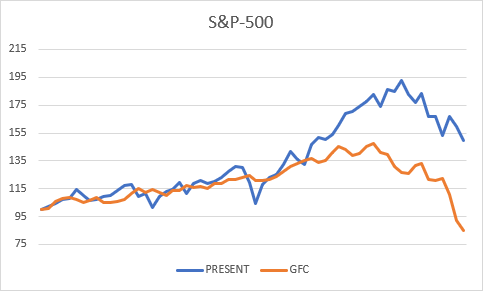 DECOUPLING IS A MYTH
All the talk of India decoupling from global financial markets seems a bit exaggerated. True, like we said, the circumstances today are different. India does stand out more resilient than most other large economies, and that offers a tailwind for outperformance. But it doesn’t change the trend.
A look at the S&P-500 and Nifty over the past 20 years throws up a high correlation of 0.96. It also indicates a significant outperformance of the Nifty vs the S&P-500. Over the period, while the Nifty returned 14.9 percent CAGR, the S&P-500 delivered only 6.1 percent. So, outperformance must not be confused with correlation. 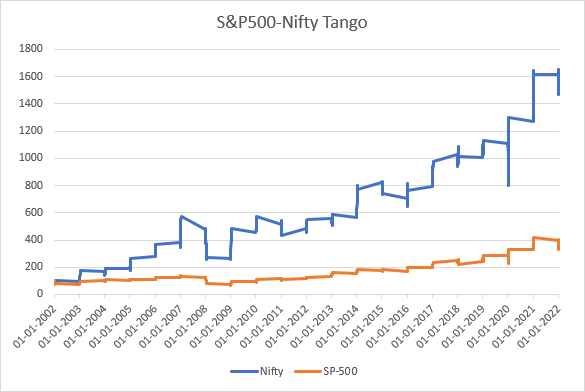 Be warned, if the world markets are in turmoil, India will not escape unscathed. Given this, and the current uncertainty, it is best for investors to wait for things to clear up before committing fresh money.
Read more from Sonal Sachdev's Bottomline here
(Edited by : Ajay Vaishnav)
Check out our in-depth Market Coverage, Business News & get real-time Stock Market Updates on CNBC-TV18. Also, Watch our channels CNBC-TV18, CNBC Awaaz and CNBC Bajar Live on-the-go!