Updated : May 30, 2019 08:37 AM IST
By recognising biodiversity heritage sites, India’s Biological Diversity Act of 2002 provides an opportunity for conserving these relics of ancient diversity.
There are already examples from different parts of the country where institutions and communities have successfully conserved biodiversity heritage sites.
On the International Day for Biological Diversity today, let us look at this option to broad base biodiversity conservation, writes Kunal Sharma.

There are many varied spaces — sacred groves, industrial complexes, national level institutes, village commons, universities, defence lands, temple premises, urban parks — that have one thread in common. They could hold remnants of the ancient landscape that had once thrived in the region, and thus be repositories of unique biodiversity.

While most of these sites are more threatened and at a greater risk of extinction as compared to protected forests, some are being protected as a result of social and physical fencing. And while these small patches are often side-lined from popular discourse, the time is right to recognise them.

The concept of Biodiversity Heritage Sites (BHS), conceived under Section 37 of India’s Biological Diversity Act, 2002, was one of the most imaginative steps taken to protect these vanishing biodiversity-rich regions. The idea has the potential of transforming the conservation landscape from a single-track protected area network into a multi-dimensional canvas of innumerable opportunities for India’s biodiversity.

In its most basic interpretation, sites that are known to be unique, ecologically fragile ecosystems with rich biodiversity, whether wild or domesticated and have significant cultural, ethical or aesthetic values can be declared as BHS. These sites may or may not have had a history of human association and are preferably not under the already existing protected area network of India. Subsequently, in 2008, the National Biodiversity Authority issued guidelines and listed management prescriptions for declaring and managing such sites, thus paving the way to implement the concept across the nation.

The Act opened a new window of opportunity for the several thousand sacred groves that have suffered twice over, one from a lack of recognition as protected areas and the second, from the threat of avaricious land conversion in the past decades. It also introduces a possibility of ‘creative conservation’ that can help in protecting a site in its present state vis-a-vis the cost of introducing another land use.

For instance, it will now be possible for a panchayat or a biodiversity management committee to invoke provisions of the Biological Diversity Act and conserve a high-altitude grove by highlighting its water retention capacities rather than agitate for its protection. With such a legal provision, these lands can potentially be preserved for eternity, even though they may not be currently protected by any other law. 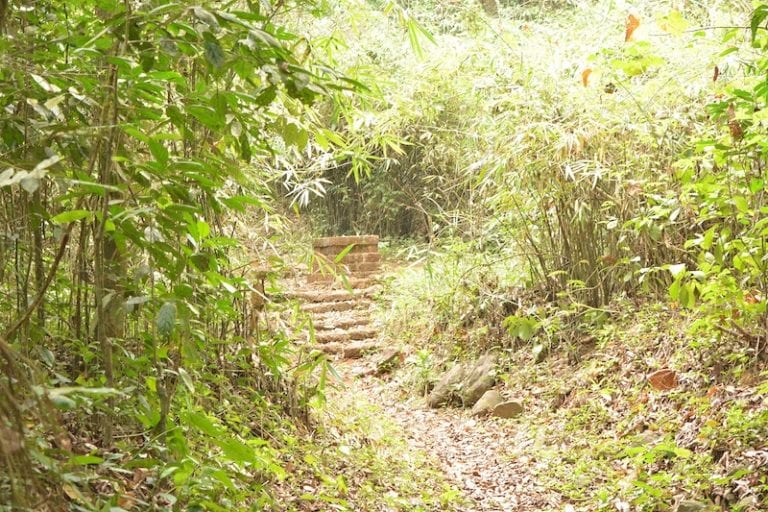 The deity inside Kammadam Kavu, a sacred grove in Kerala where the community conserves a relic tropical evergreen forest. Photo by S. Gopikrishna Warrier/Mongabay.

A unique biosphere, Majuli island, is regarded as the cultural capital of the Assamese consciousness. The entire 875 sq km island is ecologically fragile and significant interventions are underway to protect the island from further degradation. Considering its uniqueness, a proposal to declare the river island as a world heritage site was sent to UNESCO in 2004. With worldwide limelight on this fragile island, the Assam State Government in 2017 declared the entire island as a BHS site in order to highlight the biodiversity heritage of the island.

With a robust BHS notification guiding the BMC in implementing the management plan, it is expected that this recognition will provide environmental, social as well as economic benefit in the long run. The case can also provide a roadmap on the possible long-term implications of declaring BHS sites.

As Majuli continues to be in the limelight, conserving an obscure sacred grove in the remote village of Chilkigarh in West Bengal becomes an equally important task. Considered to be the largest sacred grove in the state, the Kanak Durga grove is spread over 60 acres and is regarded as a prime example of the relic climax forests that had once thrived in the region.

Under sustained human-induced stress, concerns were raised by researchers that conserving this land use is necessary, not just for ecological reasons but also to recognise the important role played by sacred groves in the social and religious milieu of the land. As a result of intense advocacy, the grove was declared as a BHS site in the year 2018.

While religion can be capitalised upon to protect isolated groves, ecological sustainability can also play a big role in protecting landscapes. The Covenant Centre for Development, an NGO in Tamil Nadu has conserved about 48 acres of degraded land at Sevaiyur near Madurai and helped create a diverse ethno-botanical forest. The intense patch of green is not only an ecological paradise but also a rare source of fresh water for the drought-prone farmers of the region. This manmade creation deserves the tag of protection and is an ideal case to be considered as a BHS site. Even natural forests that may be threatened by land use changes in similar landscapes such as Sevaiyur can be conserved under BHS provisions. The Kaiga nuclear power plant lies in the midst of the Western Ghats and has considerably changed the face of the Kali river valley system. However, a grudging acknowledgment has emerged that the valley is a haven for wildlife and especially birdlife (with four native species of hornbills found in large numbers). The Nuclear Power Corporation of India Limited under its environment stewardship programme now organises an annual bird race and proudly talks about conservation. A BHS site here can not only put the spotlight on the vulnerable wildlife but also put the onus on the authorities to preserve large parts of the township under its jurisdiction.

It is not a pipe dream for already the Gandhi Krishi Vignyan Kendra campus (GKVK) spread over 167 hectares in Bengaluru was declared as a BHS site after a proposal was received from the University of Agricultural Sciences in Bangalore. If more such institutions come forward, the snowball effect can provide legal protection to thousands of hectares of public land in India.

It can also provide an opportunity for industries to leverage their responsibility toward environmental sustainability. An intensive publicity campaign by the national and state biodiversity boards, state forest departments, support groups and NGOs can expedite the information sharing process.

These sites when institutionalised through a management plan can be utilized for a variety of purpose – to highlight the ecosystem services provided by the land, to reinforce traditional religious identities, as a source of revenue in the form of tourism and sustainable forestry, as a conservation initiative in the absence of applicability of forest laws and/or as a species-centric protection measure.

The very nature of the regulations concerning BHS sites spells out hope for the long-term sustenance of the initiative. At its core, the voluntary character of the process implies an intricate desire within the stakeholders to preserve the land. It also does not put any restrictions on the prevailing practices of the community, other than those voluntarily adopted.