Bathing in Ganga during Kumbh may wash away sins, but what about diseases?

Bathing in Ganga during Kumbh may wash away sins, but what about diseases? 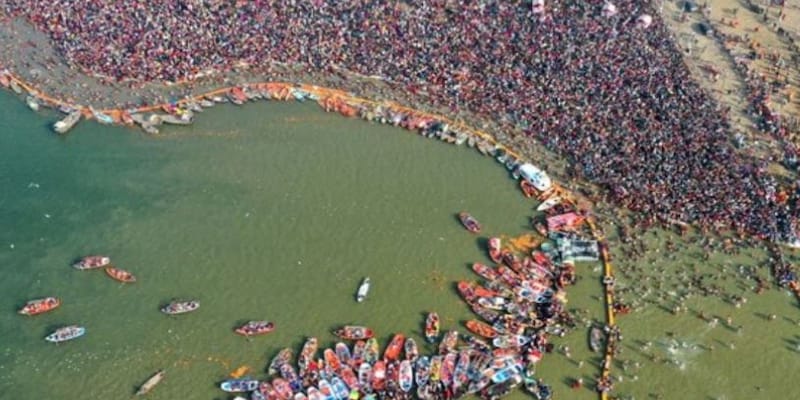 On February 24, the Indian Prime Minister Narendra Modi was on the banks of River Ganga in Prayagraj in Uttar Pradesh. He was among the millions of people from India and abroad who bathed in the river during the Ardh Kumbh Mela, which took place from January 15 to March 4 in Prayagraj (formerly known as Allahabad). The Kumbh Mela is a mass Hindu pilgrimage held on the banks of the Ganga in Prayagraj and three other cities, Haridwar, Nashik and Ujjain, at different time intervals. Bathing in the river is believed to wash away one’s sins.

However, a report released by the Uttar Pradesh Pollution Control Board (UPPCB) for January has revealed that the Ganga at Prayagraj, both upstream and downstream, is unsafe for bathing and could expose people to extremely high levels of coliform bacteria, mostly the faecal coliform, Escherichia Coli.
Holding it responsible for the sorry state of rivers in Uttar Pradesh, the National Green Tribunal last month recommended slapping a fine of Rs 40 million (Rs 4 crore) on the UPPCB. The tribunal accused the board of “culpable negligence” and of a “collusive act between industries and the board”. 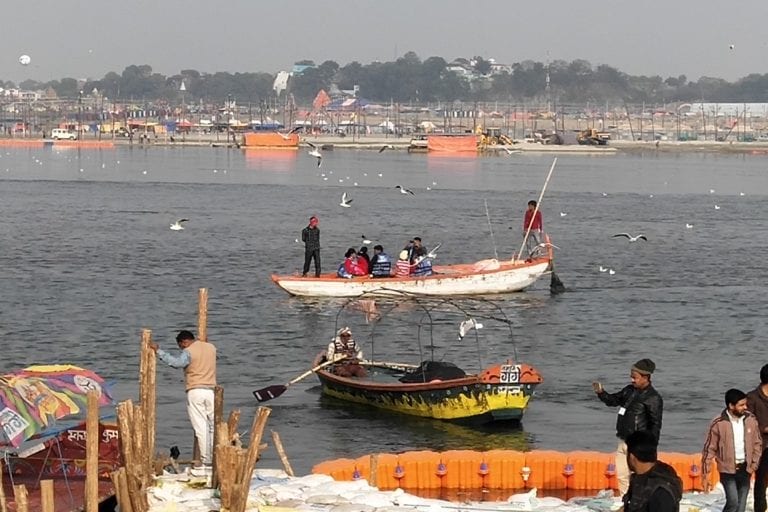 In January, the total coliforms count in the Ganga at Prayagraj was 35 to 40 times higher than the maximum permissible limit. Photo by Kanchan Srivastava.
Although the central and state governments had taken several measures to improve the water quality of the Ganga ahead of the 49-day long, Rs 42 billion affairs Rs 4,200 crore), the latest survey of the water by the pollution watchdog paints quite a dirty picture. The pilgrimage had an estimated footfall of 150 million this year.
Faecal coliform bacteria enter rivers through untreated sewerage. The maximum permissible limit for total coliforms (TC), a scientific parameter to measure water quality, stipulated by the Central Pollution Control Board (CPCB) for organised outdoor bathing is 500 MPN/100 ml (MPN = most probable number). In January, the TC count in the Ganga at Prayagraj was 17,000 MPN/100 ml and 20,000 MPN/100 ml upstream and downstream respectively — 35 to 40 times higher than the maximum permissible limit.
“Faecal coliforms (9,300 MPN upstream and 11,000 MPN downstream in Prayagraj Ganga) contribute to almost half the TC in the samples,” said Dr Ashok Verma, a senior UPPCB scientist.
“The presence of faecal coliform in high numbers indicate the presence of pathogens in the water that usually comes from human and animal excreta. These might lead to water-borne diseases such as diarrhoea,” said Dr S. Mani, a Lucknow-based medical practitioner.
Meanwhile, according to a UPPCB official, the yet-to-be-released report for February is expected to be worse as the river at Prayagraj turned black on March 2 due to the filth generated from heavy human activity.
The only consolation, if it at all, is the fact that water quality was better in January compared to December 2018 (22,000 MPN upstream, 21,000 MPN downstream), when the government initiated efforts to improve water quality before the Ardh Kumbh mela started. Additionally, the Biochemical Oxygen Demand (BOD), another crucial quality parameter, at the incoming and outgoing stretches of the river was within permissible levels (3 mg per litre or less) in January 2019, whereas in December it was 3.2 and 3.4 mg per litre in the incoming and outgoing stretches respectively. The BOD level indicates the amount of oxygen needed by microbes to decompose the organic matter in the water. “If the BOD level exceeds beyond 3 mg/l, it indicates the presence of high industrial toxins that are not degraded by water organisms and means that the water is not suitable for even domestic purposes like washing, let alone consumption,” a pollution board official said.
Lack Of Political Will and Planning Loopholes Mar Clean Ganga Efforts
In the run-up to the Ardh Kumbh Mela, the state had ordered the closure of all 402 tanneries in Kanpur and Unnao districts between December 15 and March 15 to ensure that industrial toxins don’t make their way into the Ganga at Prayagraj. Engineers were deployed to monitor water treatment on 227 drains across the state that fall into the Ganga.
In addition to this, the sewage treatment capacity at existing plants was strengthened under the National Mission for Clean Ganga (NMCG). Projects worth Rs 9 billion (Rs 900 crore) were completed before the Ardh Kumbh which included the laying of sewage network in uncovered areas, building seven sewage pumping stations and three treatment plants of the total capacity of 72 million litres per day. This raised the city’s capacity to treat sewage up to 330 million litres per day of sewage, which is nearly the amount it generates, up from about 260 MLD.
The state irrigation and water resources department had also been releasing an extra 3,000 cusec of water daily into the river from various barrages in order to maintain an adequate amount of water necessary to keep pollution in check. On the days of ‘shahi snan’ (royal or holy bath), 8,000 cusecs were released. The National Mission for Clean Ganga, was allocated Rs 263 billion since 2015 for abatement of pollution, setting up sewage treatment plants and development of riverfronts and crematoria along the Ganga. Photo from the UP Government.
However, none of these precautionary steps seemed to serve the purpose.
The amicus curiae of Allahabad High Court in the Ganga pollution case and member of the draft committee of the National River Ganga (Rejuvenation, Protection and Management) Bill 2017, Arun Kumar Gupta, said, “The scientific indicators are alarming and exposes the corruption and lack of political will at every level. It is only because of the courts’ directions that the centre or state authorities took any step at all to clean the Ganga.”
The National Mission for Clean Ganga or Namami Gange, the flagship project of the Modi government, was allocated Rs 263 billion (Rs 26,300 crore) since 2015 for abatement of pollution, setting up sewage treatment plants (STPs) and development of riverfronts and crematoria on the Ganga across the country.
Only Rs 61 billion (Rs 6,100 crore), or 25 percent, of the allocated, had been utilised till January 2019. “This proves the half-hearted approach towards the mission,” said a Kanpur leather exporter, on the condition of anonymity, whose business has come to a standstill since the past two-and-half months after the government’s orders to close of tanneries.
According to Gupta, the gap between sewage generated and the capacity to treat it is widening fast in Prayagraj. The generation of sewage is calculated on the basis of civic water supply. The government doesn’t take into account the household water pumps that extract groundwater illegally due to inadequate civic supply. Explaining the possible reasons for faecal contamination in the river water, Gupta said, “At Kumbh, only chemical treatment of sewage was being done – this doesn’t necessarily remove micro-organisms. The fact is that due to the diversion of drains (where some drains not connected to STPs before, were diverted towards these drains) some sewage treatment plants (STPs) were loaded beyond their capacity, leading to a large amount of untreated sewage making its way into the river. The STP modules are also not the most effective as they pass quickly through a short tract of sand-bed, a natural purifier, before meeting the river.”
To make matter worse, half of the treated sewage gets contaminated again due to open defecation and mixing of faecal sludge at few places, suggests by a 2018 report published by the Centre for Science and Environment.
Said Gupta, “Flood-planes of the river have been encroached upon by property developers over the years, which has led to a drastic decrease in sand bed, a natural water purifier. Five small streams of Ganga enter in Prayagraj. Four of them were filled with sand for the Ardh Kumbh so that more land is available for use. In the process, aquatic biodiversity, including nesting areas of fish and turtles, is destroyed.”
The Yamuna, Assi and Varuna rivers, which merge in the Ganga, also add to the pollution load as do open defecation and over-exploitation of river water for irrigation purposes, say locals.
Different Places, Same Story
The plight of the Ganga is no different in the 30 other cities in Uttar Pradesh that the river flows through. Of the 31 monitoring stations in the state, for which the latest faecal coliform contamination data is available in 2019, 25 were found to be way below desired standards set by the UPPCB. Some of the most polluted stretches were at Varanasi, Prayagraj and Kanpur.
While the TC count was 4,600 MPN/100 ml upstream and 34,000 MPN/100 ml downstream of Kanpur in January 2019, in Varansi, Modi’s own constituency, recorded a TC count of 1,300 upstream and 43,000 downstream. 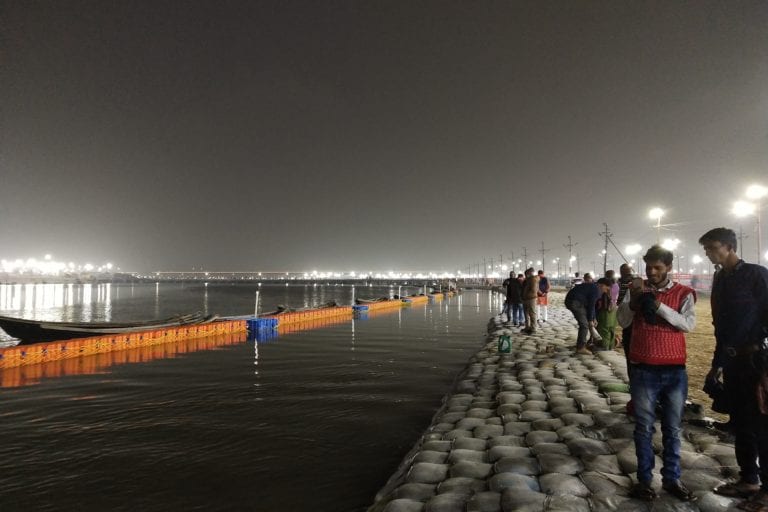 The National Green Tribunal held the Uttar Pradesh Pollution Control Board responsible for the sorry state of rivers in UP and recommended a fine. Photo by Kanchan Srivastava.
Gupta said, “Presently 2,000 million litres per day of sewage is generated in the 30 cities through which the Ganga flows. Three-fourths of this amount goes straight into the Ganga because sewage is being treated only in Prayagraj, Kanpur and Varanasi, and that too partially.”
The narrative is the same across the country. Reports documented by the Central Pollution Control Board, which examine the 2,525-km long Ganga at 80 sites starting from Gangotri, where the river originates, to the Bay of Bengal where it ends, say that the Ganga is unfit along its entire course, barring one spot at the border of UP and Bihar. Biological species are also at high risk due to the rising pollution. A 2018 CPCB report gives Varanasi and Prayagraj ‘severe’ and ‘moderate’ pollution status respectively.
The story was originally published in Mongabay-India.
Check out our in-depth Market Coverage, Business News & get real-time Stock Market Updates on CNBC-TV18. Also, Watch our channels CNBC-TV18, CNBC Awaaz and CNBC Bajar Live on-the-go!